There are iconic roles and then there is playing Princess Diana in The Crown. But you won’t catch Emma Corrin, the 24-year-old actor who was just 18 months old when Diana died in 1997, using the word, ‘icon’.

And for good reason as she opens up about being hospitalised mid-filming, her own relationship with body image and why growing your body hair really isn’t a big deal. Josh Smith kneels before the new People’s Princess.

“I find the word icon, particularly in reference to Diana and with any woman we put on a pedestal, to be quite reductive,” says Emma, while talking about becoming Diana, a role which went so much deeper than wearing a blonde wig, to working on and studying what Emma describes as “the psychological journey” of Diana with a movement coach.

“The label of icon ignores so much of who Diana was and her beautiful complexity,” Emma continues as we meet on the set of her GLAMOUR shoot. “She was called the People’s Princess because people felt like they could relate to her. That is so much more important than any kind of label.” 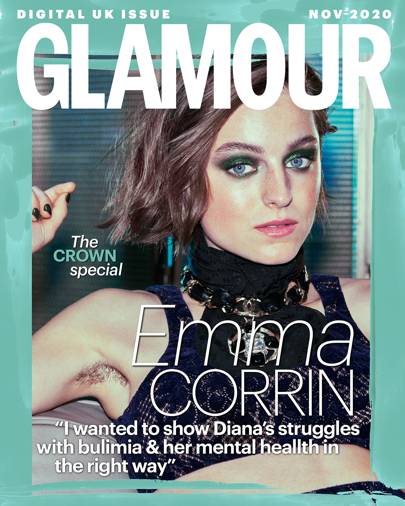 Photographs Aitken Jolly, Beauty Director Anita Bhagwandas, Styling Sasa Thomann, Styling assistant Sammiey Hughes, Make-up Kay Montano, Emma wears top, skirt, scarf and necklace, all Chanel What surprised her from going on this psychological journey with the movement coach, I ask? “I remember early on, she asked me, ‘What animal do you think Diana is?’ I said a deer, caught in the headlights. A few days later at home, a cat came to my window watching my puppy and it was tilting its head and I thought, ‘Oh my god it’s Diana!’ We started watching a lot of cat behavior videos where cats are doing the Diana head tilt and it was phenomenal. For me that was a start of putting aside those impressions that I have of her as being quite young, quite innocent and quite naive towards something that’s more complex. That surprised me,” Emma reveals.

Emma – who shares striking physical similarities to the late princess including wide blue eyes and that perfect ‘Diana head tilt’ – also refuses to adhere to labels, especially inbeauty. “I think it’s interesting how the media and a lot of our culture loves to label or to pigeon-hole women,” she says. “How I present myself, what I do with my makeup, my body hair, my hair or anything aesthetically, will always be dictated by what I feel and nothing external.”

An ethos that the younger Princess Diana would no doubt have shared, if it wasn’t for the expectations of the Royal Family at the time. So, how did Emma seemingly come out of nowhere – bar appearances on ITV’s Grantchester and Amazon Prime’s Pennyworth – to land one of the most coveted roles on the planet? 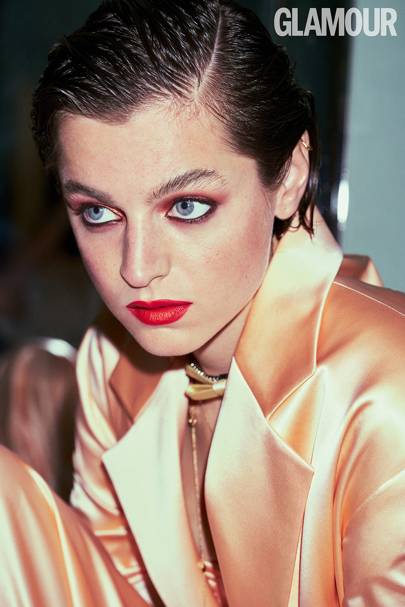 Born in Tunbridge Wells, Emma was rejected from drama school – twice – instead, going on to study English and drama at Cambridge University, where she performed in 19 plays as a member of the famous Cambridge Footlights theatre group. Shortly after graduating in 2018, Emma embarked on months of auditions for The Crown, which culminated in a memorable ‘proposal’, during a staged chemistry reading with Prince Charles, played by Josh O’Connor. She tells me how, as soon as she walked in the room, the show’s director, Benjamin Caron, surprised her by getting down on one knee and asking, ‘will you be our Diana?’ “It felt a bit like the world stood still for a second,” she recalls, beaming with pride.

Shooting on location in Spain for two months was a highlight for Emma, but the trip ended dramatically. “I’m asthmatic and I had been ill for a while with a bad cough,” she recalls. “I had to film a scene in a freezing-cold swimming pool, with the kids playing William and Harry. It was honestly the hardest scene to film because I was genuinely keeping myself alive treading water, and also keeping five-year-old ‘Harry’ alive, as we found out he couldn’t swim!

We were meant to be flying back that night to the UK, so we went past a hospital to get me antibiotics. The doctors gave me an oxygen test and said, ‘We cannot let you go because your oxygen levels are so low,’ so I was hospitalised. I remember the nurses, figuring out what I was filming and saying, ‘We know you’re playing Princess Diana, would you like us to put a cardboard bag over your head so no one recognises who you are?’ in broken English!” 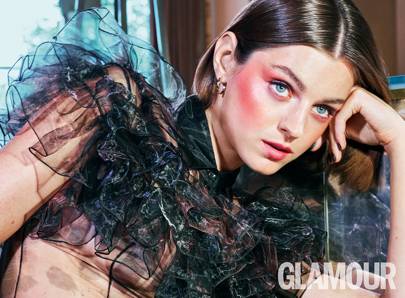 Emma also shares the late Princess’ rebellious streak, but with a Gen-Z twist. During our interview, she pulls up the sleeves of her black T-shirt to proudly display her armpit hair to me, before rubbing her hands up her hairy legs, which are clad in floral Lycra cycling shorts.

“I’ve been meaning to grow it for quite a few years, but I’m recently single,” Emma reveals. “I haven’t done it before because I’ve been in a relationship and I guess I had been programmed to think that I should probably shave for the benefit of both parties. But f*ck it – I don’t really want to shave!” I realised, ‘why did I ever bother?’ It’s been quite an underwhelming realisation of, there’s no drama in it. It’s just there. I’m hoping it’s on the path to becoming normal and it never has to be a thing you notice.”

This marks a turning point in Emma’s own relationship with beauty, which has been fraught with, “trying to fit in,” while attending a Catholic boarding school. “I was a huge tomboy when I was younger,” Emma says, as she details her journey from unconfident teenager to jobbing model – a career she put a stop to in 2016 when a designer told her, “Sorry, it’s just we’re not used to girls who exercise,” when a pair of trousers didn’t fit her in a London Fashion Week fitting. 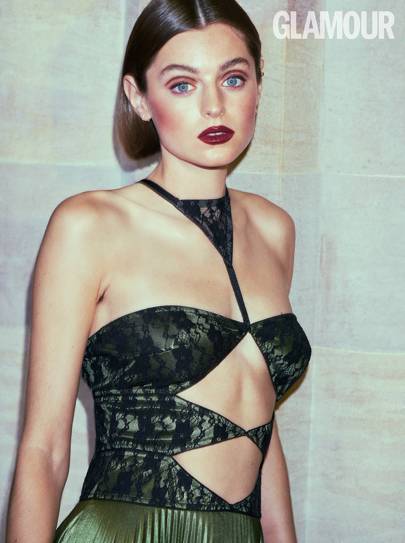 “I refused to dress in feminine clothes until I was about 13 or 14,” she continues. “I went to an all-girls school and that was good in some ways because there was no pressure to look a certain way for guys. I didn’t really ever go to school wearing makeup, and also I wasn’t very interested in it. Even now I am most comfortable not wearing lots of makeup as when I wear it.”

Emma’s relationship with beauty – and skincare – was shaped while she struggled with acneat university. “When I was in my second year, I started getting adult hormonal acne on my chin and on my forehead,” she reveals. “I’d never had skin problems before, so it really threw me. It’s so intertwined with your self-confidence. I freaked out and I started taking everything under the sun in terms of supplements, trying every skincare thing and I was Googling endlessly, ‘How to get rid of hormonal acne.’ I even thought about going on medication.”

Sat before me today with clearer skin, Emma shares the game-changing product that helped her, after she was gifted a travel set of Aesop products. “I started using them and it honestly transformed my skin in the three days. My skin obviously found what it was looking for and it was the Parsley Seed Anti-Oxidant Serum.” 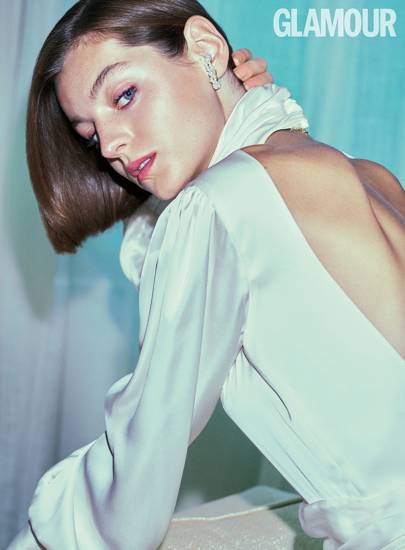 But Emma still has occasional flare-ups. “I still get reactions when I’m on my period or just life stuff,” she says. “I get so aware of when my skin is bad, I feel like I wake up, look in the mirror, see spots and go, ‘F*ck, this is awful, this is the worst day.’ But that just says so much about how we’re conditioned to think that we have to conform to this idea of perfection.”

The topic of body image took on a new meaning for Emma through portraying Diana at the height of her battle with bulimia. “I was so determined to represent Diana’s struggles with bulimia and her mental health in the right way,” she tells me. “In The Crown’s version of events, Diana’s relationship with her body is massively dictated by the emotions she’s going through. It was very interesting to be reminded how our relationship with food and with our body image, can be so linked to what we’re going through emotionally.” 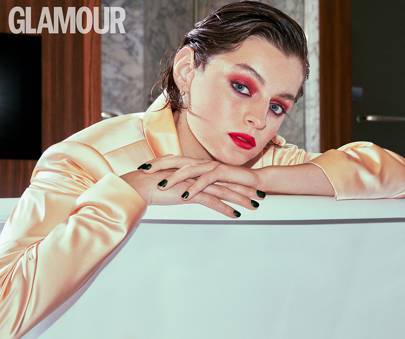 “I think any time I’ve experienced limiting what I eat, or any kind of irrational changing of my diet, or if I get quite control freaky about exercise is so I can feel a sense of control. It gets worse when I’m stressed or when I’m sad because it’s a way of coping.”

Letting go of these pressures came in the form of dance for Diana, and equally after learning jazz, tap and ballet for the role, Emma too felt liberated. “Learning to dance was a big thing, because I’ve never really been that coordinated,” she laughs. “When we filmed a scene with Diana’s ballet teacher which was meant to symbolise her letting go, I was asked to dance to Do You Believe by Cher – unchoreographed. I just lost my shit and when I went out of the room, everyone watching on the screens were actually crying. It felt like the truest way of working through stuff!”

Away from undertaking such a therapeutic role, Emma looks after her wellbeing in the simplest of ways. “Toast makes me feel comfortable, with peanut butter and a hefty bit of Lurpak,” she says. And, therein lies the power of Emma, just like Diana, she is relatable. 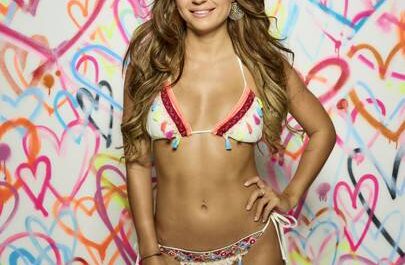 Sonequa Martin-Green opens up about racism 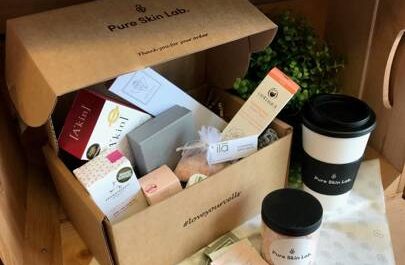