Latkes, which are wonderfully crisp potato pancakes, are the specialty of the Jewish holiday Hanukkah. Every year, my dad would fry latkes (pronounced LOT-kuz) in a skillet of hot oil, but it bothered him that his batter of grated potatoes would turn gray so quickly from exposure to the air. 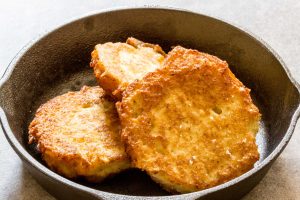 My father was an engineer with chemist envy, and there wasn’t anything he couldn’t figure out with a little trial and error, so he decided to solve this latke problem once and for all. 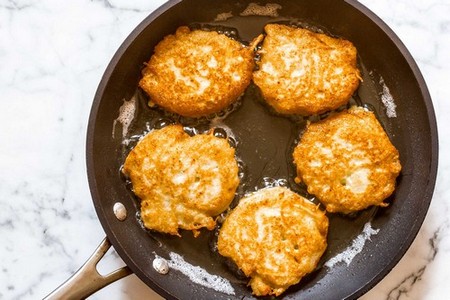 He tried many things over the years, including grating the potatoes by hand into a bowl of grated onions. But when the food processor came along, he found his solution.

He finally settled on this approach: He would mix all the raw potatoes along with some onion in a food processor until the mixture was very smooth and pulpy. He already knew that onion helped keep the potatoes from graying; this worked even better.

Then he would wrap the potato-onion mixture into a kitchen towel and squeeze out as much moisture as he could to make the mixture as dry as possible – this helps the latkes crisp. Then he added eggs, flour, and seasonings, and quickly fried the latkes.

These fried latkes are more like latkes you get at Jewish delis, probably because those places also often use this method. They are a little like mashed potatoes in texture, but with a crispy outside. 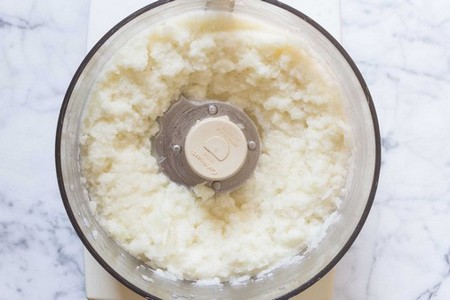 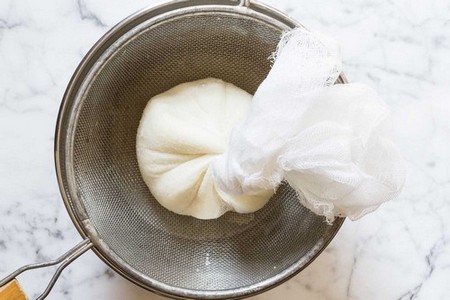 To this day, I still make latkes using his method, with just a few small changes. I squeeze the potato-onion mixture in cheesecloth instead of a kitchen towel, since you can just discard the cheesecloth afterwards. (It’s so much easier.)

I also add one hand-grated potato to the mixture. This adds some appealing texture to the otherwise smooth and creamy latkes, and I love the combination.

Another tip: You only need a thin layer of oil in the pan to fry the latkes, but it needs to be very hot. Not sure if it’s hot enough? A crust of bread should brown in 10 seconds. Add the latke batter by the spoonful and let the bottoms brown nicely before turning them. 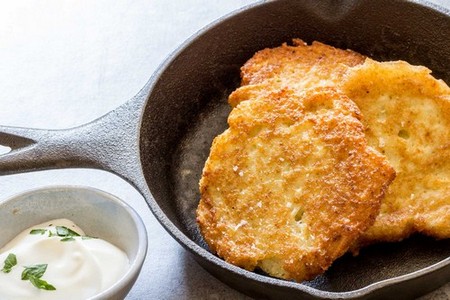 Every latke-loving family has stories about everyone standing around the kitchen pestering the cook for bites of hot, crisp pancakes, not waiting for them to cool. Don’t send them away. It’s the best way to eat latkes!

Why eat latkes at Hanukkah? It’s actually the oil, not the potatoes, that is significant for the holiday. As the tale goes, ancient Jews used the small amount of oil they had to rededicate their Temple in Jerusalem and the oil lasted for eight days, which is why Jews light candles for eight nights.

Add a bowl of sour cream for dipping, and some applesauce too, if you like. Pass the napkins. 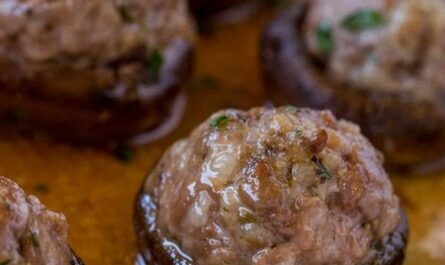 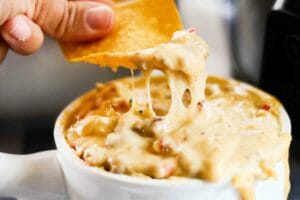