Borscht is not just beet soup, it is an invariable attribute of Russian cuisine in the representation of foreign citizens, second only to vodka and pancakes. Bordovo-red with golden sparkles, fiery hot, meat with characteristic sourness, thick – so that the spoon stood – this is our response to imported gazpacho.

As for the true motherland – Ukraine, borsch is certainly its most serious contribution to world cooking. Vareniki outside the former Soviet Union are little known, but borscht know everything.

As soon as the air begins to smell like autumn, the body reacts instantly and requires a hot one. A woman is satisfied with tea with candy, with a man this number will not work. If you want to please your lover, remember the culinary conservatism inherent in the strong sex. No, the spinach and sorrel casserole is certainly unusual, and maybe even delicious, but you definitely will not find the way to the heart with it.

Prepare him a better borscht, the same one, which in sum with cutlets reminds a woman of her kitchen slavery, but invariably pleases the man. It’s rich, meaty, aromatic, with garlic and sour cream – he will appreciate it. 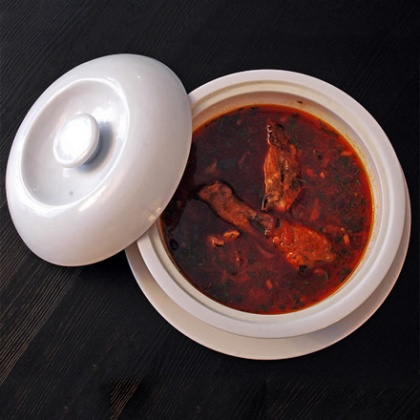 If we talk about the origin of the name, the story is muddy, like a beetroot broth. According to one of the versions, this is just the name of the main component of the borsch – beetroot in Old Slavic called “borsch”. On the other – borshch in the old days called the now forgotten plant cowbler, whose young greens were used to make a soup of green-brown color.

The English botanist, a contemporary of Shakespeare, describes how the eastern Slavs stems, leaves and flowers of the cow grouse were piled in barrels, poured with water and left to insist for several days – it turned out something like sauerkraut. Therefore, perhaps, those who cook borscht with fresh leaves of a young beet are right.

To spite of enemies

In general, Ukrainian cuisine is extremely diverse – thanks to its rich history and large territory. But, in spite of common roots, it is very different from Russian. William Pokhlebkin notes its integrity – both in the selection of products for cooking, and the principles of cooking.

“The traditions of the Old Russian cuisine were not included in the national Ukrainian cuisine, the connection with which was lost after the Mongol-Tatar invasion,” he writes. – This distinguishes Ukrainian cuisine from Russian and Byelorussian, where ancient traditions, although modified, were nevertheless preserved for many centuries.

” In addition, having experienced the influence of Turkish cuisine, the Ukrainians adopted some technological methods. For example, the so-called lubrication – pre-frying, dressing vegetables for borsch. As for the famous attachment of Ukrainians to fat.

Another feature that is typical for Ukrainian cuisine is the presence of one main ingredient in the dish, while all the others are a complement – for example, in the borsch, which we are going to cook, it is beet, and all the other ingredients only successfully complement its taste.

In addition to beets, beans and beans are widely used in Ukrainian cuisine, as well as carrots, potatoes, tomatoes and corn, spices – onions, garlic, dill, bay leaves. Almost all this can be caught with a spoon in a bowl of borsch. In total, there are about 40 varieties of borscht – in each region it is cooked in its own way.

If we rephrase the well-known saying: borsch without meat – money to the wind. Let’s leave the vegetarian option for the passing summer. A real Ukrainian borsch is cooked on a meat broth: it is a pledge of a good borsch. William Pokhlebkin recommends for a borscht to take a brisket, less often for a broth use a thin or thick edge. Beef and pork is better to take in the proportion of 2: 1 or 1: 1.

In some varieties, for example in Lviv borsch, add ham or sausages, and Poltava borscht cook on chicken broth (but in this case add other meat is no longer possible). Meat is cooked for 2-2,5 hours, after boiling, the fire should be lowered and continue cooking on low heat. Ready meat is taken out and cut into large or small pieces – if desired, it will return to the borsch 15 minutes before it is ready. And go to the vegetable part.

It is important to prepare all vegetables before laying in a pan – all individually. Beet roast in oil or on fat and then extinguish.

The secret of a saturated burgundy color is actually very simple. Before you send the beet into a frying pan, sprinkle it with vinegar or lemon juice, at the worst, add citric acid.

In the meantime, fry the onions with carrots, add to them tomato paste or tomatoes. “It is very important to consistently lay vegetables in broth,” writes Pohlebkin, “in strict dependence on the duration of their cooking. So prepare a timer.

Potatoes should be placed 30 minutes before borsch is ready, cabbage – for 20, stewed beets – for 15, browned vegetables (onions, carrots, parsley) – for 15 minutes, spices – for 5-8, garlic – for 2 minutes “. Do not forget to put the boiled meat already cut.

In the end, the most interesting thing is that the lard is rubbed with garlic and herbs to a mushy mass and sent to borsch. Now leave the pan on the lowest heat for 20 minutes, so that the borshch has reached, and suffer from the breathtaking smell. 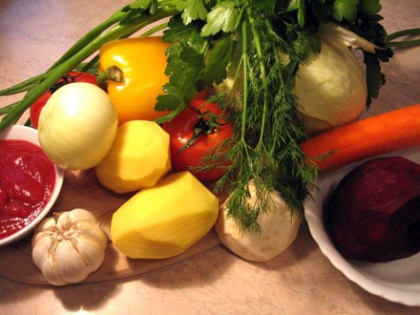 For Ukrainian borsch you will need:

Cook the meat broth as described above, in the meantime, put out the beetroot with the vinegar and part of the fat, add sugar. In oil, fry carrots and onions, parsley root. Cook potatoes with cabbage in broth for 15 minutes, then add the sliced ​​vegetables (beets, carrots, onions), after 10 minutes add oil and spices. Then send garlic dressing to the borsch. Allow to infuse and pour into plates. Do not forget about sour cream. And about bread – certainly Ukrainian (we’ll cook the pampushki next time).

Borshch – the dish is surprisingly homemade. No restaurant, in a pot or a smart piano, can match the mother’s borshch in a simple white crockery. But if two and a half hours is sorely lacking, and the body requires borsch, you have the opportunity to taste it. Fortunately, there are restaurants of Ukrainian cuisine in Novosibirsk, although there are not many of them. In the cafe “Taras Bulba” 300 grams of borsch cost 95 rubles, in “Shinki” – and Vakula, and Solokha – can be limited to 200 grams for 108 rubles, or to eat in full – 350 g cost 147 rubles. 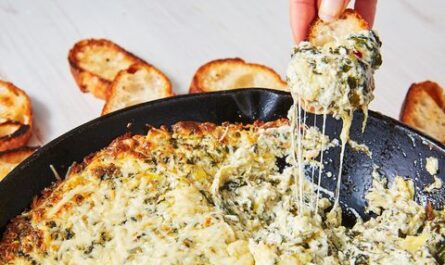