Former US President Barack Obama scored himself a subscriber cover of InStyle just in time for the release of his memoir A Promised Land. In the magazine feature, he shares an excerpt from his book and speaks about the most influential women in his life (of course that includes Michelle, Malia, and Sasha).

But the navy lululemon bomber jacket he put on to pose for photographer Shaniqwa Jarvis? Well, that’s a story in and of itself.

You might remember when Obama joined Joe Biden’s campaign trail in late October and a video of him picking up a basketball and casually sinking a three-pointer went viral.

It happened in the Northwestern High School gym in Flint, Michigan, and the whole scene, which Obama promptly posted on Twitter, even caught the attention of LeBron James. 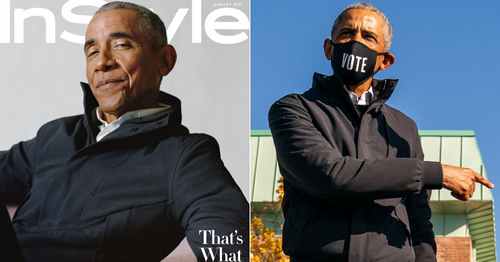 When InStyle editor-in-chief Laura Brown invited Obama to take his portrait, she requested he put on his lululemon best. “He was surprised by the ask: ‘I’ve got better jackets.’ When interviewer Sandra Sobieraj Westfall pointed out it was ‘that’ jacket, he grinned and said, ‘I showed some swag in that one.'”

Brown shared the story with her followers upon revealing the cover, and just like that, this navy bomber jacket became a real treasure. We’re sure it won’t be the last time someone summons Obama’s presence in the swag coat.

Ahead, watch Obama sink his shot all over again, and see his now-iconic jacket in all its glory.

Kelly Clarkson Discusses How Divorce Impacts Family: “It’s Your Babies You Worry About”

As Kelly Clarkson navigates her divorce from Brandon Blackstock, their kids – River Rose, 6, and Remington Alexander, 4 – are her first concern. On Tuesday, the singer opened up about dealing with a public split while also being a mother on The Kelly Clarkson Show. “It’s horrible,” she admitted. “There are so many hard parts. The hardest for me is the kids. That’s the hardest for me.”

Glennon’s comments struck Kelly and guest Alicia Keys, who was visibly impacted by her words. “We’ve all been trained to believe a good mother is a liar,” Glennon continued. “I didn’t leave a marriage in spite of being a good mother. I left because I am a good mother.”

Kelly told Glennon she resonated with this feeling while reading her book Untamed, and it emboldened her to “make a step” in her own relationship. “Not just for me, but also for my current husband. This isn’t happiness for both of us. Both of us deserve better. Neither one of us would want this for our children.” Catch Kelly and Glennon’s conversation about divorce starting at the 2:05 mark above.