Like most of you, I’ve watched that Instagram video of Jennifer Lopez climbing out the car onto the red carpet and into the arms of Ben Affleck multiple times this weekend.

The way he intimately puts his arm around the small of her back, how she whispers something we’ll never know, which causes him to let out a dirty laugh. The 37-second video crescendos to its finale, with the couple posing for pictures as Ben pulls Jen in for a final embrace before they walk off arm in arm, followed by a sea of flashing lights.

In a time where social media has forcefully pulled the curtain back on the Hollywood façade (hello TikTok breaking Kylie Jenner’s pregnancy announcement), Ben and Jen have proved that the traditional publicity stunt still holds a lot of weight.

Far for me to burst your Bennifer bubble with my own beliefs that they’re nothing but one of the best PR strategies in recent years. After all it wouldn’t matter if I showed you concrete evidence that their coupling was planned by a team of marketing masterminds (I don’t have that evidence, sadly) because you want to believe in them so badly, you’re part of why their relationship exists. 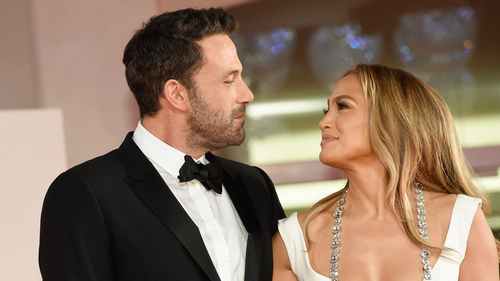 From the lava lamp that lights my room up a slightly sordid neon pink, to the teeny-tiny butterfly clips I bought on a whim from ASOS, you only need to look at the recent purchases of me – a 34-year-old woman – to know that the only comfort we have in these uncertain times is nostalgia. It’s driving everything right now, not just my desire for a 2003 Louis Vuitton x Murakami multicoloured shoulder bag.

As much as we talk about it, we can’t quite fathom what we’ve been through these past 18 months because we are still living through the pandemic. While we know that life will never be the same again, we still don’t know what that life will look like.

If being locked in our homes for weeks like an episode of The Walking Dead wasn’t enough, we’re also facing the realities of climate change. Flash flooding, insufferable heatwaves, wildfires and storms are a 10 o’clock news regular, but still as we chew on our paper straws we can’t quite wrap our heads around the fact that in 20 years (without action) we’ll essentially be starring in our own Tom Cruise disaster film.

Just like you, I can’t commute that I’m going to be 54 years old at some point, let alone 54 and canoeing through Soho thanks to the rising sea levels our governments have ignored all these years.

All of this feels too much to cope with and I haven’t even touched on the political divides tearing countries apart, racism, food shortages, Brexit and the rise of fake news fuelling anti-vax believers.

So of course, we’re going to retreat to our childhood bedrooms with our lava lamps and follow Instagram accounts that regram nothing but Britney Spears pre-conservatorship VMA performances and Jessica Simpson pre-divorce Newlywed quotes.

It’s all simply too much, but you know when it wasn’t too much, when it didn’t feel like we were all doomed? When Jen and Ben were on that yacht back in 2002, back when your biggest problem was how to get those pink Chloe sunglasses with the crystal heart in the corner.

Our rose-tinted glasses are on so firmly that we have practically made Bennifer 2.0 come to life. Why do you think they recreated those iconic boat pictures 20 years later? Same reason why Addison Rae’s film debut is a remake of She’s All That, nostalgia sells.