We’ve moved on, right? We’ve had loads of realistic portrayals of Ireland on our screens in recent years, big box-office films such as Brooklyn, Once and The Guard, featuring real-life Irish actors and dispelling the myth that we all live in tiny thatched cottages and go around wishing each other top of the morning.

Switch on BBC any night of the week and you’ll see Angela Scanlon and Ronan Keating presenting the One Show, Dara O’Briain on Mock The Week, or Andrew Scott being generally amazing in Flea Bag, His Dark Materials or whatever latest hit series he’s been snapped up for. All of them speaking in real, normal-person Irish accents.
Being Irish, I am very used to seeing dodgy portrayals of Ireland on screen. You know the type, full of Aran-jumper-wearing farmers, diddly-eye music, sheep traffic jams, and accents ranging from begorrah to full-blown leprechaun. But many of the worst offenders – Tom Cruise and Nicole Kidman in Far And Away, Mathew Goode in Leap Year, and Gerald Butler in PS I Love You, who gets a special mention for possibly the most mangled version of an Irish accent I’ve ever heard – were produced a long time ago.

So it was especially jarring to feel as if we’d been transported back to the 50s when the Wild Mountain Thyme trailer dropped yesterday. Where to start with this film? Well, first up – the name, and the fact that the song Wild Mountain Thyme is actually Scottish? So, you know, an entirely different country to the one we’re supposed to be looking at? 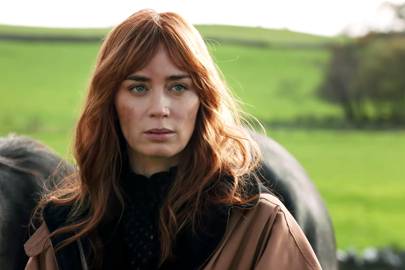 Secondly, when is this film supposed to be set? Rosemary talks about freezing her eggs, so presumably we’re talking present day, but to look at the houses (apparently we don’t yet have electricity in Ireland), outfits (so many granny shawls and flat caps), and cringe dialogue, you’d think this was the 30s. One of them garbles to another at one point: “We’re known to each other quite the while now – would ya marry me?” Seriously, who talks like that? I lived in Ireland for 27 years and that sentence structure is completely baffling to me.

But what’s really offending Irish people is the casting. Has anyone told the producers of WMT that there are loads of really talented, actually Irish actors in existence in the world, who could have played these parts without inciting rage and ridicule? Instead, we get British star Emily Blunt as the fiery Rosemary Muldoon (of course she’s fiery, you can tell from her red hair) and American Christopher Walken as cranky old farmer Tony, who at one point utters the line: “welcome to Ireland”, you know, in case all the stereotypes hadn’t already made it glaringly obvious. Worst of all, there’s actual Northern Irish actor Jamie Dornan as Anthony, whose best friend appears to be a donkey. I’m not sure I have enough eye rolls for this.

How is it that Co Down-born Dornan somehow manages to have the worst Irish accent of all three? At least Jon Hamm plays an American character, because no offence to him, but I seriously doubt he’d do any better.

All of which pains me to write, because I love Emily Blunt, and up to this point she could do no wrong in my eyes. She, Walken and Dornan are all decent actors, so how they all go through filming thinking they were nailing it? I get it, Irish accents are hard to do. And they’re so rarely done right, but it is possible. Award goes to Daisy Edgar-Jones of Normal People (now there’s a show that managed to put Ireland on screen without resorting to paddywhackery), because I watched her play Marianne for two whole episodes before realising she wasn’t Irish.

Finally (for the trailer at least), I’m taking issue with the completely offensive ‘gag’ based on an outdated fighting Irish cliche:

Anthony: “I don’t like a fight.”
Rosemary: “Well who does?”
Anthony: “Half of Ireland, just not me!”
Hilarious, right?

I’m baffled that the level of blatant stereotyping in this trailer has made it to our screens in 2020. Is it meant to be a parody? Maybe it’s a cynical marketing trick, and the producers are well aware how much Irish people love a bit of outrage and the Twitter storm this trailer has kicked off is playing right into their hands.

Sure, you can see Wild Mountain Thyme as just a harmless rom-com, and yes, there are many much worse examples of tone-deaf film and TV making. But in a time where we’re all waking up to the need for proper representation and cultural sensitivity, is there really a place for this film? We’ll see when it airs on 11 December – prepare for the backlash on Irish Twitter.