We are witnessing a crucial moment in Nigeria’s history. We have never seen anything like the peaceful protests we’ve seen this past week, where everyone has been so united on a single front.

The government has done a lot to divide the people of Nigeria, but whether you are rich or poor, whether you live in the wealthy or poor parts of the country, no matter your background or your economic status – you have been affected by SARS. We are coming together and we are saying ‘enough is enough’.

SARS have been killing innocent Nigerians for many years. The police target young people based on their looks which results in violence, arrest, and exploitation for money. If a young person has dreadlocks, tattoos or gold chains, the police assume they are a criminal. If they have an expensive-looking car, an iPhone or a laptop, the police assume it must be stolen or that they’re some sort of scammer.

That is because the leadership in our country is so archaic, where the stereotypical beliefs are that if you have tattoos, you are not from a respectable household; if you’re a woman who wears a short skirt, you must be a prostitute; if you are young but own an expensive electronic device, you must be a thief. 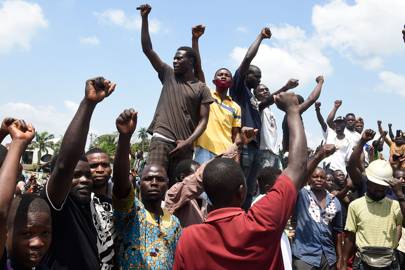 Protestors in Magboro, Ogun State, on 21st October
These are centuries-old beliefs that still run deep in the system, and that is what causes chaos; when the world and its mindsets evolve, but the mindset of our leaders and police don’t.

That is what causes chaos; when the world and its mindsets evolve, but the mindset of our leaders and police don’t
So, they take peaceful protests and manipulate it into something violent. They open fire on our unarmed people and they consistently abuse their power. My friends have sent me pictures of random bullets that have shot through their windows and onto their beds, onto their kitchen floors. My brother has heard shooting right outside his house all throughout the night. Stories of women being beaten so hard with police batons that their skull has been fractured. So, so many images and videos of bloodshed.

There was even a story of a girl who had a laptop in her car and was stopped by SARS. They took her to an ATM and ordered her to clear out her whole bank account and give it to them. After maxing out her card, she managed to get back to her car and escape. The officers were shooting at her as she drove off.

This abuse of power has been allowed to happen because no one holds them accountable, and that is Nigeria’s biggest issue – lack of accountability. If no one is holding them accountable, they can kill three people in an evening and throw their bodies into a river and no one will know. 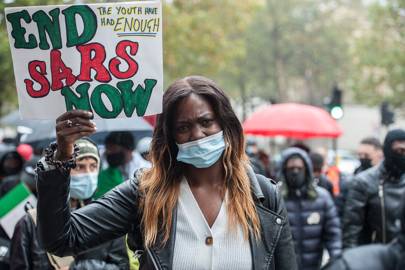 Protestors in London on 21st October

These are powerful people. In a country where more than 82 million people live on less than $1 a day, Nigeria’s lawmakers are some of the highest-paid in the world. The average legislator’s pay is more than 50 times Nigeria’s GDP per capita.

So, to protect their livelihoods and their families, my parents’ generation chose not to challenge those in charge. Instead, they focused on being self-sufficient so that they didn’t have to rely on the government for anything. Nigerians are incredible people. That’s why so many have their own generators, their own water sources, their own means of healthcare, they sort out their own education for their kids.

My mum was speaking out against the government, and my dad got an anonymous phone call saying: ‘Your wife is talking too much’

But this has been boiling under the surface for so long, and now the lid has blown. We’ve had enough. We cannot, we will not, stay silent any longer.

The government reported that SARS was ‘disbanded’ on 11th October, but they said the same thing in 2017, 2018 and 2019, and SARS were still on the street killing young people. The head of police Mohammed Adamu has now announced that a new Special Weapons and Tactics (SWAT) body will be created to ‘fill the gaps’ left by SARS. They’re literally going to take the old members of SARS and put them into SWAT.

Changing their uniform does not fix anything. Unless there is extensive physical and psychological retraining, there will be no systemic reform, that archaic mentality will still exist, and the brutality will continue.

If we want to see good in the world, we need to be just as loud and strategic as the people who are pushing for fear and hate and corruption. Staying silent is not an option; we need to get loud and we need our voices to be heard. Don’t just sit back and think you don’t have an impact. You have the ability to influence people around you, who can go on to influence others – then change starts to happen, it breeds momentum, and we move closer to ending injustice. And that is how we change society. That is how we get justice for all the souls lost at the hands of police. 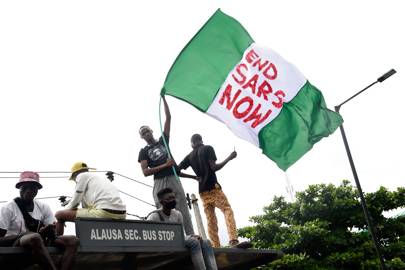 Protesters in Lagos on 15th October

Here are three ways you can help now:

I Decided to Fight Hustle Culture by Doing Less, and I’m Not Turning Back

Why everyone is obsessed with new period drama, The Great