Rebeca Andrade, who became Brazil’s first-ever women’s artistic gymnastics Olympic medalist during the all-around final this week, took home the gold, another first for her country.

She out-scored Skinner 15.083 to 14.916. The height Andrade gets off of the vaulting table is exquisite every time, and she didn’t disappoint in this final. Yeo Seojeong of South Korea claimed bronze and performed a vault named for her that consists of a front handspring connected to a front layout with two full twists. Her average was 14.733.

Sunday marked two event finals for women artistic gymnasts in Tokyo, and it was a silver finish for MyKayla Skinner on vault. She is an individual athlete representing the United States, meaning she did not contribute to the team’s silver medal this week, and she put up strong scores, performing a Cheng (a roundoff onto the springboard with a half turn onto the table and a front layout with one a half twists off) and an Amanar (a Yurchenko with two and a half twists in a back laid-out position).

Fellow individual athlete Jade Carey, who was a clear favorite for the podium and qualified through to the top eight in second place at the preliminary round, received a 12.416 upon messing up her steps for the first vault and not executing it properly. 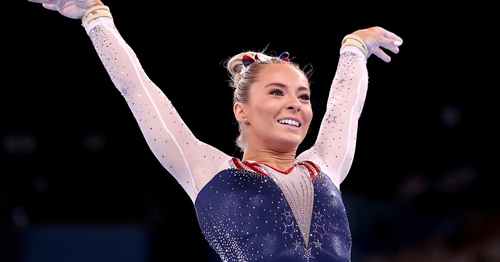 Catch Carey in the floor final on Aug. 2, where she could compete a triple-twisting double layout, the most difficult tumbling pass on floor in women’s gymnastics right now. If landed successfully, Carey would get the skill named after her in the Code of Points.

Skinner replaced Simone Biles when the two-time Olympian withdrew due to her mental health and experiencing the “twisties.” Skinner, an alternate at the 2016 Olympics, was called up to the vault competition after missing out on qualifying due to the two-per-country-maximum limit. She finished fourth in that qualifying round, and it was her last gymnastics competition of her career – or so she thought.

“This is closing the book on my gymnastics career, and my only regrets were things outside my control. So no regrets,” Skinner wrote on Instagram following qualifications. Then, upon hearing the news, she posted, “Looks like I get to put a competition Leo on just one more time,” and she added that she was going into the vault final to do “this for us,” tagging Biles.

Ahead, you’ll find images of Skinner and the other vault medalists at the Tokyo Games. As NBC analyst and Olympian Bridget Sloan said during the live broadcast, “Gymnastics wants her back!”

Who is Debbie Allen? It is time to claim your power