So, roll up, roll up, one and all, to witness the gender inequity of the mortgage world and just what exactly you can do about it. We asked the experts to find out what, exactly, is going on….

In the grand tradition of women generally being totally screwed, we have the gender pay gap, the gender pension gap and now…we give you…the gender mortgage gap!

Let’s start with some good news….

The bottom rung, right? Well, not exactly. Let’s start with a bit of good news. Stats from Barclays show that women are getting on the property ladder earlier than men, with the average age of female first time buyers sitting at 31, compared to men at 32.

“Getting a foot on the property ladder is something our customers tell us is one of their biggest financial and life goals, so it’s great to see people are achieving this goal at a younger age than in previous years,” says Jo Harris, Head of Millennials (yes, that’s a thing) at Barclay’s, “Our data shows further good news for female first-time buyers, who are actually managing to get their dream home a whole year earlier than the average guy looking to buy.” 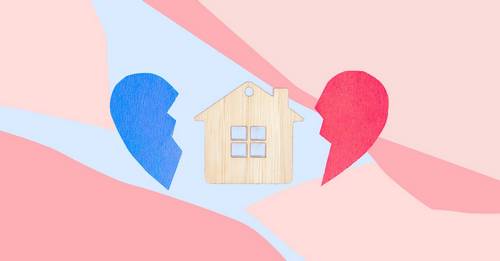 Yet, a 2019 report from Trussle, shows that this is in the context of official figures, which show that more than half (53%) of the UK population now wait until the age of 34 before owning their own home, up from 26 years old in 1997.

….and then some bad.

While the Barclays stats sound encouraging, the fact remains that women are among those most underserved by mortgage providers. A report compiled by the Women’s Budget Group last year, shows that when buying a house women need over twelve times their annual salaries to be able to buy a home in England, while men need just over eight times.

The biggest reason for the gender pension gap? Low-paid employment…

“The main factor is that in all regions across the country, women have lower earnings on average than men,” says Sara Reis of the Women’s Budget Group, “This means that women’s wages are more likely to fall short of the mortgage requirements than men’s, and so it will be harder for women to get a mortgage to buy a house on their own.”

Indeed, the 2019 Trussle report revealed that, with average house prices (£230,77613) now nearly eight times the average UK wage (£29,00914), it seems impossible to see how those on lower incomes could even approach getting any kind of foothold on the housing ladder.

In fact, mortgage payments now account for a staggering 47% of disposable earnings on average – an 18% increase in the last decade for those in London and the South East. It is also the case that women too often fall into the other employment demographics that are underserved by mortgage providers.

And the reason why? Unbalanced caring responsibilities…

“The fact that women still shoulder the majority of the caring responsibilities in our families is at the core of this disparity in earnings,” agrees Sara Reis of the Women’s Budget Group, “This is a consequence of the imbalance in unpaid work responsibilities in the home but also an inadequate and expensive childcare system.

Women very often have no choice but to take part-time jobs, which are usually at entry-level and in low-paid sectors like retail, hospitality, cleaning or social care, but that may be more flexible and so easier to combine with things like school run or caring for an older or disabled relative. This then has an impact on career prospects and earning potential, which results in women’s salaries being lower than their male counterparts.”

Trussle found that despite the volume of self-employed mortgage applications, approval rates are at just 76% – lower than younger first-time buyers (90%), those with bad credit (89%), the retired (86%), and those borrowing at a high loan-to-value ratio (85%). More so, Trussle’s research found the following; that 71% of self-employed people believe it’s harder to get a mortgage due to their employment status, that 22% have felt penalised for being self-employed and a further 11% felt victimised or overlooked.

Oh, and the pandemic didn’t help…

“The coronavirus crisis and the lockdown have had a massive impact in sectors that rely a lot on women in their workforce like retail, hospitality, cleaning,” says Sara, “Many jobs are still being propped up by the furlough schemebut as it tails off and companies start to send out redundancy letters, we’re worried that many women will lose their jobs in the near future.”

Oh, and having kids in a pandemic is also – you guessed it – worse.

“Mothers are being particularly penalised, as the extra childcare added from school and nursery closures, has meant less time for paid work and they’ve beentwice as likely put on furlough than fathers. If the childcare problem is not fixed soon, many mothers may have no other option than to leave their jobs, or be made redundant by employers.”

All of which, does not exactly help you get a mortgage.

So what, if anything, can be done to close the mortgage gender gap?

“Investing in a high-quality, affordable and universal childcare system would go a long way to ensure parents and especially mothers don’t have to quit their jobs if they don’t want to or go for lower-paid positions when a baby arrives,” concludes Sara, “This is a sector made up 98% of women workers so paying these workers who we’ve seen are essential at a real living wage level would also improve women’s wages.”

It also means levelling the parenting field in other ways.

“Increasing paternity leave length and providing adequate pay is also crucial in making sure fathers are involved in caring for their children for the start, and increasing work flexibility means families can opt for a more equal sharing of care work,” adds Sara, “This would all increase women’s time to dedicate to their jobs and career if they so wish, which would go a long way of increasing women’s salaries and narrowing the mortgage gender gap.”

An ode to Keanu Reeves, the one man in Hollywood we can all agree on

Kelly Ripa and Mark Consuelos Have “Softened Up a Lot,” According to Their 3 Kids

John Boyega Calling on Disney to Value Characters of Color