But how much of The Crown season four is true? How long did the affair between Prince Charles and Camilla go on for? Did the royal family really hide the Queen’s cousin’s in a ‘mental institute’?

Here are all your questions fact-checked and answered. Here is The Crown reali-tea…

The Crown season four provides some of the most explosive and dramatic moments to date in the Netflix series, from the fairytale marriage of Princess Diana and Prince Charles, to the breakdown of their marriage – plus a man breaking into the Queen’s bedroom in Buckingham Palace.

Did Princess Diana have bulimia and how long did she suffer with eating disorders for? 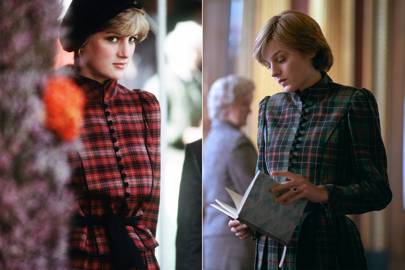 Yes, and it lasted for over a decade. In her groundbreaking – and now controversial – interview with Martin Bashir for BBC’s Panorama in 1995, Princess Diana revealed she had suffered with the eating disorder for the first time, publicly. But the story was initially leaked in a controversial book Princess Diana secretly contributed to, Diana: Her True Story – in Her Own Words, written by Andrew Morton.

In a tape recorded for the book, Diana said: “The bulimia started the week after we got engaged. My husband Prince Charles put his hand on my waistline and said: ‘Oh, a bit chubby here, aren’t we?’ and that triggered off something in me.

And the Camilla thing.” She went on to say in the tapes, “I didn’t like myself; I was ashamed I couldn’t cope with the pressures. I had bulimia for a number of years, and that’s like a secret disease. It’s a repetitive pattern which is very destructive. It was my escape mechanism.”

She went on to describe the change in her weight during her wedding dress fittings. “The first time I was measured for my wedding dress, I was 29 inches around the waist. The day I got married, I was 23½ inches. I had shrunk into nothing from February to July. I had shrunk to nothing,” she revealed. In the following Panorama interview Diana revealed she suffered with bulimia for over a decade. 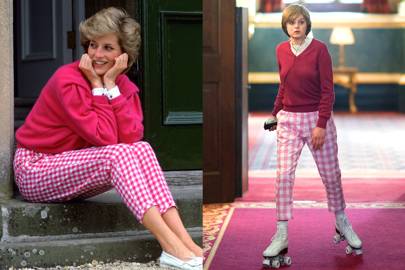 Elsewhere in the Panorama interview Diana admitted to hurting herself due to her mental health struggles. “Well, I just hurt my arms and my legs; and I work in environments now where I see women doing similar things and I’m able to understand completely where they’re coming from,” Diana revealed in the interview.

Her comments on bulimia and mental health were a game-changer in the way both were perceived in publicly.

How long did Princes Charles and Camilla’s affair go on for? Did Diana really know about the affair? 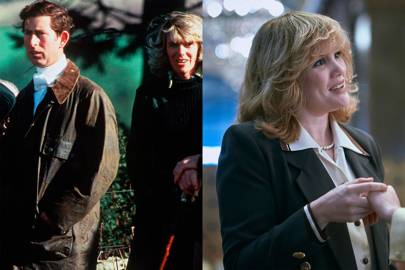 It went on for decades and yes, Princess Diana knew of the affair! In the Panorama interview Diana revealed, “there were three people in the marriage, and it was a bit crowded,” indicating she knew of the affair between Charles and Camila for some time. The pair initially met at a polo match in 1970. Camilla reportedly joked at the time that her great-grandmother had had an affair with King Edward VII, “My great-grandmother was the mistress of your great-great-grandfather. I feel we have something in common,” she said.

The pair started dating but when Prince Charles served in the navy for eight months, Camila met her husband and she became engaged. The Crown claims the affair was continuous, throughout Charles dating Diana, the wedding and the early years of their marriage but according to Charles’ authorised biography the affair began in 1985.

Princess Diana later admitted that she became so enraged by the affair that she approached Camilla at a party in 1989 saying, “I know what’s going on between you and Charles and I just want you to know that.” In reply Camilla said, “You’ve got everything you ever wanted. You’ve got all the men in the world fall in love with you and you’ve got two beautiful children, what more do you want?” Diana then said, “I want my husband, I’m sorry I’m in the way…and it must be hell for both of you. But I do know what’s going on. Don’t treat me like an idiot.”

In 1994 Princes Charles took part in an interview with Jonathan Dimbleby and the journalist asked him if he was “faithful and honorable” during his marriage to Diana. In reply he said, “Yes, yes…Until it became irretrievably broken down, us both having tried.” He continued to say about Camilla, “She has been a friend for a very long time-and will continue to be a friend for a very long time.”

How long did Diana and Charles date for? What was the age gap between Prince Charles and Princess Diana? 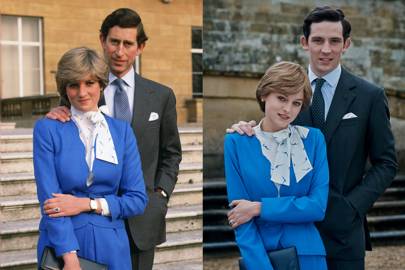 Did a man really break into Buckingham palace and sit on the Queen’s bed? 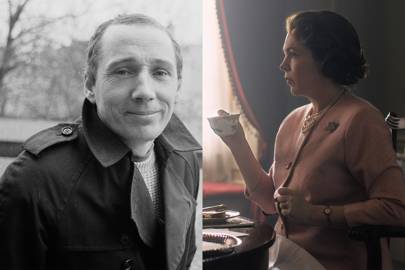 Yes! Michael Fagan DID break into Buckingham Palace. According to his personal account given to police, in 1982 when he entered the Queen’s bedroom and woke her up, it was his second intrusion, claiming he entered through an unlocked window. On his second trip to the palace, he actually had a 10-minute conversation with the queen, interrupted by a maid who led the man away and handed him to police.

Speaking about the break-in, Michael revealed, “”I found rooms saying, ‘Diana’s room,’ ‘Charles’s room;’ they all had names on them. But I couldn’t find a door which said ‘WC.’ All I found were some bins with ‘corgi food’ written on them. I was breaking my neck to go to the toilet. What do I do? Pee on the carpet? So, I had to pee on the corgi food.” Wow.

Did Prince Charles almost die in an avalanche? 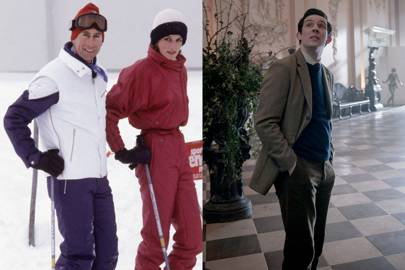 Yes – Prince Charles was involved in a near-deathly ski accident in 1988 in Switzerland. Other members of the royal family were on the trip, including Princess Diana and ‘Fergie’ aka the Duchess of York, but both held back as Princes Charles led a group on an off-road run. His friend, Major Hugh Lindsay, died but Prince Charles was able to get out of the immediate path of the avalanche.

Despite the Royal Family not commenting officially at the sequence of events, it is claimed that those who were uninjured including Charles attempted to dig out their buried friends. An AP report from the accident quoted a Swiss newspaper editor as saying that Charles helped dig someone out of the snow.

In a report which followed the incident, the investigation did conclude that the royal group took most of the responsibility – but Charles was not personally held responsible – saying, “By skiing outside official marked runs, the group had assumed a collective risk that excluded any one member from personal responsibility for the accident.”

Did the royal family really hide the Queen’s cousins in a ‘mental institution’?

Yes. In season four of The Crown, Princess Margaret investigates rumours that cousins from her mother’s side of the family were locked away in a ‘mental institute,’ as mental hospitals were labelled at the time. The Queen’s cousins, Nerissa and Katherine Bowes-Lyon, were incarcerated in Royal Earlswood Institution for Mental Defectives in Redhill, Surrey, due to their severe learning disabilities.

The sisters’ parents placed them in the facility at the ages of 15 and 22 respectively in 1941 and were named as dead, receiving barely any visitors as they spent a vast amount of their lives there. Tragically Nerissa died at 66 years-old in 1986 and Katherine died only six years ago aged 87.

Did the Queen and Margaret Thatcher get along? Was the queen really involved in the Sunday Times report? 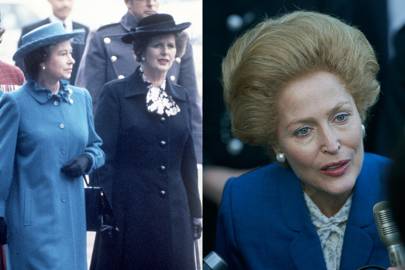 Debatable. The Crown suggests their weekly meetings were awkward at times to say the least. However, the Queen and Margaret Thatcher never spoke openly about the relationship either way. Margaret Thatcher’s official biographer, Charles Moore did however describe the awkwardness of their ‘audiences’ claiming Margaret would routinely sit, “nervously on the edge of her chair.” It is reported that the pair disagreed on unemployment figures, but their disagreements came to the fore when the prime minister refused to agree to sanctions against the apartheid regime in South Africa.

In The Crown, The Sunday Times ran a huge front page story saying the Queen privately felt Mrs. Thatcher’s approach to be “uncaring, confrontational and socially divisive” on the matter. It was officially revealed that the Buckingham Palace Press secretary, Michael Shea was the source.

In reality, the Queen was said to be shocked and reportedly rang Mrs. Thatcher immediately to apologies, and the relationship survived with the queen eventually personally awarding the Order of Merit (which can only be given at the queen’s request) as shown in The Crown. The prime minister apparently did not forget the headlines saying to an advisor, “Those little old ladies will say Mrs. Thatcher is upsetting the Queen… I’ll lose votes.”

Were the Royal Family jealous of Princess Diana’s popularity? 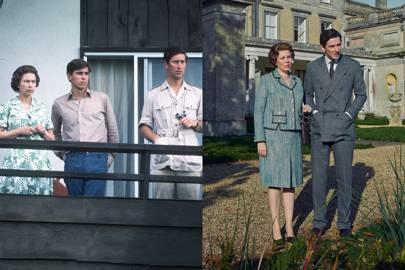 Kinda proven! In the fourth season of The Crown, Princess Anne, Princess Margaret and notably Prince Charles vocalise being jealous of Diana’s popularity. The issue came to the fore – in reality – when the couple toured Australia but it was in fact during a banquet speech in Wales, after a day of events where the crowds showed little interest in Prince Charles, and the heir to the throne said, “I’ve come to the conclusion that really it would have been far easier to have had two wives to cover both sides of the street. And I could have walked down the middle directing the operation.”

Ken Wharfe, a former Met Police officer who helped protect the Princess, wrote in his book, ‘Guarding Diana’, that during his overseas travels with the Princess the jealousy was noted. “The problem with Diana in this family is they could not deal with her popularity, they couldn’t cope with it – basically they were jealous,” he wrote.

“They couldn’t do it themselves and they wouldn’t acknowledge just how good she was at it, this was a problem,” he continued. “Their attitude was ‘this has been going on for a few hundred years lets not wreck it’ – they weren’t moving with the times and the couldn’t honestly bring it round to say ‘we’ve got somebody here who is changing its direction’.”

She wasn’t called the People’s Princes for no reason!

Was Lord Mountbatten killed by an IRA bomb? 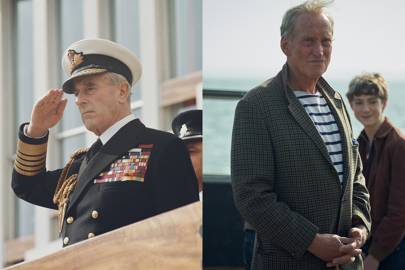 Yes. Lord Mountbatten – portrayed by Game of Thrones star Charles Dance in The Crown, was a formidable figure in the Royal family and was especially close to Prince Charles as a cousin of the Queen.

Whilst at his home in Ireland, Mountbatten went on a fishing trip with his closest family off the west coast of Ireland. Whilst the wooden fishing boat was out at sea, a bomb exploded killing three people and mortally injuring a fourth on 27th August 1979.

The IRA quickly claimed responsibility issuing a statement that they placed the bomb on the boat and triggered it via a remote control on land. Onlookers said the boat sank instantly his teenage grandson, Nicholas Knatchbull, and Paul Maxwell, a local teenager who worked on the boat were killed alongside Mountbatten. The funeral took place at Westminster Abbey weeks later. 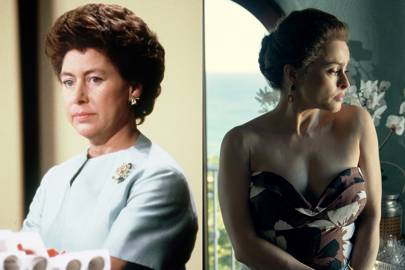 Yes. Princess Margaret’s antics in the first three seasons of The Crown point to a woman on the edge. After her marriage ended in the 1970s is was widely reported the princess suffered a nervous breakdown and as a heavy drinker she later developed hepatitis in the mid 1980s and had to have part of her lung removed, which is shown in the latest series of The Crown.

Advice From My Therapist Changed the Way I Look at Relationships

Talked About the Importance of Diversity in the Dance World

Janel Parrish on Her Favorite Beauty Secret and More