Ginge was close to being put down when he developed a large tumour on his paw. A cat, who almost lost all of its nine lives after developing cancer, is purring again due to cannabis oil.

His owner Jacek Matusiak, 35, from Burton, said: ‘Putting him to sleep was imminent. He had two strokes, an enlarged liver, significant weight loss and tumour growth to the front paw pad.’

Despite being prescribed antibiotics and steroids by his vet, nothing seemed to work, until Mr Matusiak started feeding his pet cannabis-oil laced food after reading about how a cancer patient used the drug to overcome the disease.

Within just two days of putting five drops of the oil in Ginge’s food, the cat’s tumour shrunk rapidly, as well as the skeletal feline friend gaining weight, regaining his balance and finding his voice again.

Mr Matusiak, who is speaking out to raise awareness of cannabis oil’s benefits, said: ‘Everything else didn’t work, but we believe it was the oil we gave him that helped him out.’

Ginge was given the nutritional supplement cannabidiol (CBD), which is derived from cannabis and is legal in the UK. It does not contain any THC, which is the psychoactive component of marijuana that makes users ‘high’. 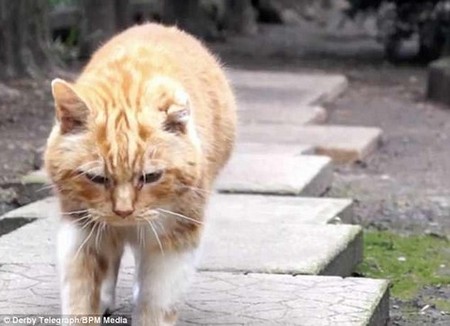 Ginge the cat, who almost lost his nine lives from cancer, is purring again after taking cannabis 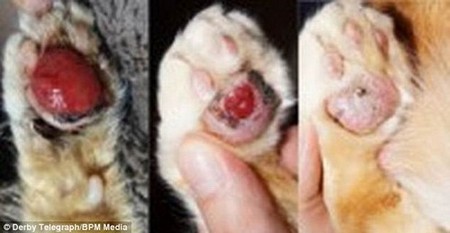 Ginge was close to being put down when he developed a large tumour on his paw (left shows the growth before cannabis treatment, centre mid way through and right after)

‘Putting him to sleep was imminent’

Speaking of his cat’s illness, Mr Matusiak said: ‘It was heartbreaking to think of letting him go.

‘Over last winter, Ginge’s health was rapidly deteriorating and he was getting weaker and weaker.

‘There was a massive change in his behaviour, he was losing his balance a lot and he lost his voice.’

Mr Matusiak took Ginge to the vet on January 10 this year.

He said: ‘Ginge was given poor prognosis by the vet and a very small chance to survive as he was very withdrawn and almost lifeless.’

Ginge, who was once skeletal, has since gained weight, and is able to walk, climb, wash himself and use his voice again since being given cannabis oil (pictured after treatment)

THE DIFFERENCES BETWEEN THC AND CBD

‘He is back to his usual self again’

The vet prescribed Ginge a week-long course of antibiotics and steroids, but neither seemed to work.

Mr Matusiak said: ‘So the same week on January 15 we went to Natural Choice, in Ashbourne, and bought a little vial of food supplement CBD. It was £35 for 500 milligrams.’ Natural Choice is a health-food store.

He added: ‘We put five drops a day in Ginge’s food and just two days after starting it he started walking better and keeping his balance.

‘He completely perked up and started being more responsive. Most of all, his voice came back.

‘Ginge now walks around the garden, climbs the stairs, washes himself and overall has regained his vitality and strength.

‘Now he can walk around the garden and he is back to his usual self again.

He said: ‘He’s put on weight too, as he was underweight and skeletal before.

‘He’s a really adorable, loving cat. He comes to us a lot for cuddles and he’s just like a little baby.’

‘I want to spread the word’

According to Mr Matusiak, there is around three decades of research supporting CBD’s use.

He said: ‘It is very possible that it could be used to treat pain and arthritis in humans too.

‘I can’t judge if this is “it” but I’ve been overwhelmed by the effects on my cat.

‘People just need to be aware that this could be really useful. I want to spread the word about how this could help people.’

Previous research suggests CBD possess a range of medicinal benefits and has been reported to help people suffering from migraines, psoriasis, acne and depression.

Natural Choice was unable to comment on the case.

Men with stronger handshakes are more likely to get married