But, in reality, these pesky spasms happen to the vast majority of us at one time or another, and an expert explained to Daily Mail Online just what is going on behind your tired eyes.

It always seems to happen when you are already running on too little sleep: your arm or your eye starts twitching spastically, as if you weren’t having a hard enough time concentrating.

The subtle jerks could last for two minutes, or two hours, but either way, it feels like an eternity. These involuntary movements can be disconcerting, and have driven many people to the neurologists office, asking what is happening to them.

Involuntary eye twitches may drive you insane the day after a short night, but a neurologist says you don’t really need to worry about anything being wrong with your brain

‘People get nervous about them but really, they’re benign, not pathologic,’ in nearly all instances, Mayo Clinic neurologist Dr Eric Sorenson says. 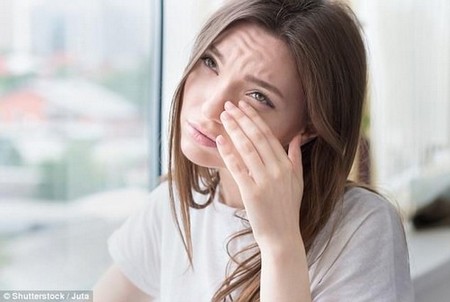 Indeed, forums like WebMD and Quora are chocked full of terrified questions about unnerving, jerking eyes.

These twitches are are a minor electrical miscommunication between the brain and the body.

There is an association between twitches and amyotrophic lateral sclerosis (ALS), which has probably caused a second sleepless night for plenty of people suffering the tired twitches.

But in reality, most twitches are normal and harmless, explains Dr Sorenson.

While it is technically a ‘neurological disorder,’ BFS is hardly out of the ordinary and will strike most people at least once if not periodically throughout their lives.

Nerve cells are like a battery. Every time it fires, not only does it discharge a pulse, but it has to be recharged, during the resting state

These twitches are akin to what happens when you plug your phone into a charger and get the familiar ‘buzz’ to indicate the device is juicing up – before you’ve plugged the charger into the wall.

For any more you make, a number of muscles are obeying a neurological order and working together to make that movement happen.

‘Normally, what happens in when that is voluntarily controlled, is that the brain sends messages down to the spinal cord,’ telling the muscles to act, says Dr Sorenson.

The brain’s electrical messages are transmitted to the bodies of nerve cells in the spinal chord, and from there passed down the long arms of those cells – called axons – to the muscles, stimulating them into action.

These nerve cells are ‘like a battery. Every time it fires, not only does it discharge a pulse, but it has to be recharged, during the resting state’ explains Dr Sorenson.

But, ‘periodically something will happen along the length of that nerve to alter the electrolyte distribution in the membrane and cause it to spontaneously fire on its own,’ he says.

Scientists don’t really know why we get these irritating twitches in the particular places we do, but they are most common in the eyelids, arms and at the back of the calves. It also seems that the origins of the perturbed neural firings are fairly random, and could come from just about anywhere along the nerve cells.

But, scientists suspect a few environmental factors that can trigger the short-term tremors.

Electrolytes – particularly potassium and magnesium – play a key role in the process of neural firings.

When your levels of either fall too low, it disrupts the firing and reload process for neurons.

‘It is believed that heavy caffeine use, lack of sleep and physical aerobic exercise can make fasciculations more prevalent,’ says Dr Sorenson.

Although we know one mechanism the fatigue twitches, we have not figured out a good remedy to them. If you are magnesium-deficient, taking a supplement can help ward off the spasms.

A ‘coalescing of multiple fasciculations’ can make you cramp, which means that staying hydrated – especially with something electolyte-rich like Gatorade – and stretching can help prevent involuntary twitches, says Dr Sorenson.

But the bad news is that once a twitch starts up, ‘there’s really nothing you can do to make them stop,’ he says.