Residents of Mongolia are drinking ‘oxygen cocktails’ and ‘lung tea’ to help protect themselves from air pollution.

Sold for as little as $1, adverts in Mongolia claim ‘drinking just one oxygen cocktail is equal to a three-hour-walk in a lush forest’.

Yet, the World Health Organization (WHO) states there is no scientific evidence supporting such drinks’ benefits.

Slum dwellers who are forced to use coal stoves to cook and heat their homes in the capital city of Ulaanbaatar, where temperatures can plummet to as low as -40C, are thought to be driving the problem.

According to UNICEF, Ulaanbaatar is the most polluted capital city in the world, with an air pollution level 133 times higher than the safe limit set by the WHO.

Respiratory infections in the capital have nearly tripled, with pneumonia being the leading cause of death in under five-year-olds, data from UNICEF shows. 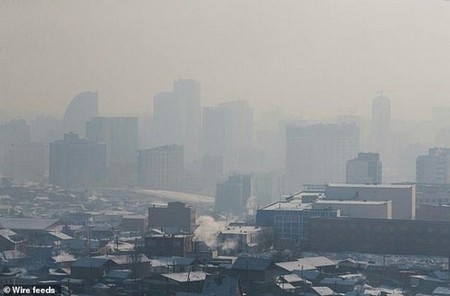 Residents of Mongolia are drinking ‘oxygen cocktails’ and ‘lung tea’ to help protect themselves from air pollution (pictured: Ulaanbaatar, the most polluted capital city in the world)

For $2, shopping centres are selling cans of oxygen called ‘Life is Air’ with the promise of turning an ordinary glass of juice into an ‘oxygen cocktail’.

Many pharmacies also are stocking machines that turn juice frothy for as little as $1 and are recommended by doctors for pregnant women.

Some Mongolian residents are also turning to special teas in an effort to clean their lungs, with sales rising up to 30 per cent when pollution peaks during winter.

Baatar Chantsaldulam, CEO of ‘lung-tea’ company Dr. Baatar, told AFP: ‘First it takes all the toxins out of the blood, then it turns the toxins in the lung into mucus, and all the plants in tea helps boost the human immune system.’

Yet, Maria Neira, head of the WHO’s public health department, said the only way to minimise the effects of pollution is to avoid exposure, adding there is no scientific evidence oxygen cocktails or lung teas have any benefit.

DOES EXPOSURE TO AIR POLLUTION DURING PREGNANCY CAUSE BIRTH DEFECTS?

Women exposed to air pollution before getting pregnant are nearly 20 percent more likely to have babies with birth defects, research suggested in January 2018.

Living within 5km of a highly-polluted area one month before conceiving makes women more likely to give birth to babies with defects such as cleft palates or lips, a study by University of Cincinnati found.

For every 0.01mg/m3 increase in fine air particles, birth defects rise by 19 percent, the research adds.

Fine air particles, which weigh less than 0.0025mg, are given out in vehicle exhaust fumes and, when breathed in, become deposited in the lungs where they enter the circulation.

Physicians Committee figures reveal birth defects affect three percent of all babies born in the US.

Around six percent of infants suffer in the UK, according to a report from the British Isles Network of Congenital Anomaly Registers

Monthly fine air particle levels were matched to the home addresses of pregnant women before and after they conceived.

Angry residents believe not enough is being done

Angry residents claim the Mongolian government is not doing enough to combat air pollution, arguing the public should not have to pay $300 for at-home air purifiers.

Tumur Mandakhjargal, from the non-profit organisation Parents Against Smog, said: ‘For the past 10 years, people have known that air pollution has reached dangerous levels.

‘However, policymakers only address the issue by talking about passing out clean stoves and clean coal.’

Parents Against Smog campaigners believe the government should give slum dwellers loans to install proper home insulation and replace their stoves with cleaner alternatives.

The Mongolian government spent $120 million between 2008 and 2016 trying to combat air pollution, with half of the funds coming from foreign aid.

So far, tax exemptions have been passed for companies selling air purifiers, which are also being given out to schools and hospitals.

Yet, Tumendalai Davaadalai, from the campaign group Smog and Kids, said air purifiers do not give out oxygen and therefore fail to solve the problem of air pollution.

This comes after research released last December suggested young children who grow up exposed to air pollution are more likely to develop asthma.

A mix of dust, sand and non-exhaust tailpipe emissions, known as coarse particulate matter, increases youngsters under 11’s risk of the lung condition by 1.3 per cent, a study by The Johns Hopkins University found.

Air pollution also raises their risk of visiting the emergency room due to their asthma by 3.3 per cent and being hospitalised with the condition by 4.5 per cent, the research adds.

Young children are thought to be more at risk due to them typically spending a lot of time outdoors and being vulnerable to air pollution due to their immature lungs, according to the researchers.