Keeping her face concealed and identity private, the woman known as Jennifer shared that she was initially happy with the result and paid just $250 for the procedure, which usually costs in the region of $700 to $800.

A Detroit woman has revealed how a discount microblading turned into a nightmare landed her in hospital for three days.

Microblading is a semi-permanent tattooing technique that creates individual hairlike strokes to fill in sparse or thinning brows.

Raw deal: A Detroit woman known as Jennifer revealed how a discount microblading deal turned into a nightmare that landed her in hospital for three days

Awful: She paid $250 for the service which usually costs between $700 and $800, and shortly after the treatment her skin began to swell and blister 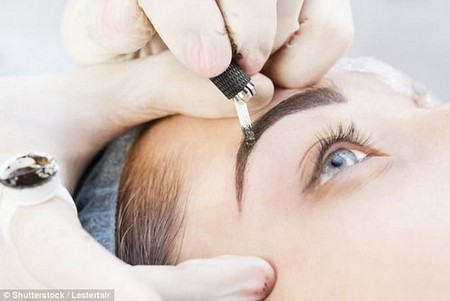 Correct procedure: Microblading is the process of creating a semi-permanent tattoo in order to achieve the look of a full, well-shaped brow

However, her customer satisfaction was short-lived, as she explained to Karen Drew from WDIV4, a local station in Detroit, Michigan.

‘A few days after I noticed that they were starting to get little lumps in it,’ she detailed.

And as the pain and redness started to increase, leading to swelling around the eye area, Jennifer decided to seek medical attention.

‘I went to Urgent Care and they diagnosed me with cellulitis on my face, gave me antibiotic and sent me on my way’ she shared.

Cellulitis is a bacterial skin infection that may spread rapidly.

However, as the infection in her brows kept getting worse, Jennifer decided to take daily photos to document her injury, and when she saw they were getting worse, headed to the Emergency Room.

‘When they admitted me, they put me on an IV antibiotic and then the next morning they started me on steroids.’

Jennifer spent three days in the hospital and said she felt ‘terrified’ during that time.

‘My face was swelling up, my eyes were closing, thinking I don’t know what’s going to happen,’ she added. 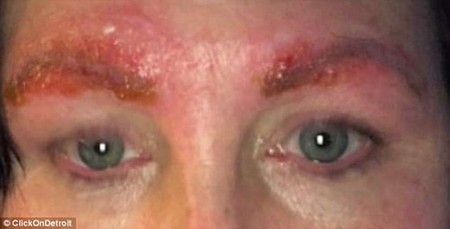 Urgent: Jennifer visited an Urgent Care facility and was diagnosed with cellulitis, a bacterial skin infection, and prescribed a topical cream

No improvement: However when Jennifer’s infection seemed to get worse she went to the Emergency Room, was admitted and hooked up to an IV antibiotic

Treatment: Jennifer is now under the care of Dr Steven Grekin, a dermatologist who has warned about the ‘potentially life threatening’ danger of an infection of this kind

Jennifer is now under the care of dermatologist Dr Steven Grekin of The Grekin Skin Institute, who has prescribed a treatment to help heal Jennifer’s wounds.

‘This is potentially life threatening if not treated,’ Dr Grekin told WDIV4, explaining that as the sinuses are right behind the eyes, an infection in this area can have an impact on the brain.

Buyer beware: Dr Grekin also advised anyone else considering microblading to check out the salon ahead of treatment

Dr Grekin then listed the different elements that could be to blame for Jennifer’s severe reaction to the treatment, including a potential allergy to the ink used, the products used to prep the skin or an infection due to being told not to wash her face for two days.

‘Now I regret going in there and getting it done but it is vanity. You want to look good and you don’t ever think that’s going to happen to you,’ Jennifer added.

Although Dr Grekin did share his top tips for anyone else considering microblading.

‘I think it’s buyer beware. I think you have to do your research. I think you have to have multiple visits to make certain that you’re comfortable the place is clean, that it’s efficiently run, that this is not taken as a sort of cavalier, come in and get your eyebrows waxed,’ he detailed.