Kale, quinoa and goji berries are the flashy symbols of the healthy eating movement but Britain’s next favourite superfood may be a much more mundane vegetable that many of us already have in our kitchens.

Sales of mushrooms are reportedly on the rise by up to 20 per cent, with a spike in purchases being linked to their health benefits.

Mushrooms are not only low in calories and fat, but are rich in B vitamins, as well as other nutrients that can improve our skin and help us feel less tired, according to health experts.

Mushrooms are a source of B vitamins, copper, niacin, potassium and phosphorous which may be why sales are soaring this year

Sales of mushrooms as a category have grown by nearly 20 per cent in the last year, according to the Mushroom Bureau, a not-for-profit group funded by mushroom enthusiast volunteers.

More than 11,000 tonnes of mushrooms were sold in March this year alone, which equates to 537 billion of the fungi. 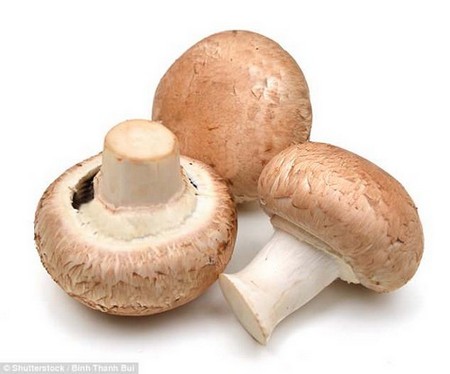 Sainsbury’s has also seen a significant rise, with sales of its Taste the Difference Shitake Mushrooms rising by 16 per cent, and sales of speciality mushrooms such as oyster and enoki soaring by 8 per cent.

Tesco reports it has also seen a small rise of between 2 and 3 per cent in the last year, which a spokesman said equates to a few million more boxes of mushrooms sold in the UK in the previous 12 months. 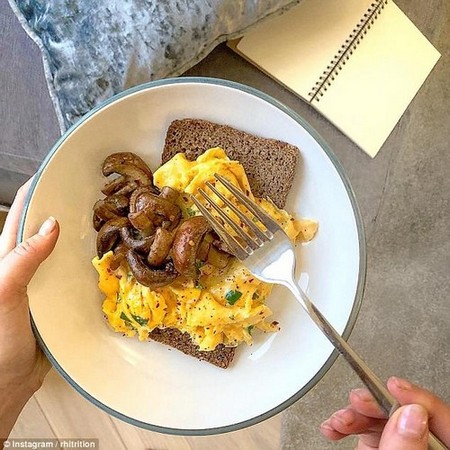 The Mushroom Bureau believe the rise in popularity of fungi is due to their health benefits as shoppers look for more ways to improve their diets.

The Times named them as its ‘superfood of the year’ this year and mushroom lattes are this year’s latest kooky health trend.

Harley Street nutritionist Rhiannon Lambert says that mushrooms live up to their new superfood label – and has a tip for how to make them even healthier by storing them in the sunshine.

She told FEMAIL Food&Drink: ‘Many mushrooms are good sources of selenium, which helps to support the immune system and prevent damage to cells and tissues.

Rhiannon’s black bean and mushroom chilli from her book, Rhitrition

‘They’re also a source of copper, niacin, potassium and phosphorous. Additionally, mushrooms are a good source of fibre, protein, vitamin C and iron.

‘Because their cells walls are undigestible unless exposed to heat, you must cook mushrooms to get their nutritional benefits.

‘Here’s a little tip: place them in the window sill on a sunny day and in as little as an hour or two they become a source of vitamin D.

‘As mushrooms are grown in darkness the sudden exposure to UV light means the mushrooms dish out vitamin D as an antioxidant to protect themselves from the sun. Place the dark gills facing upright for maximum results.’

Mushrooms are also said to be rich in B vitamins, which can help you feel less tired and more energised.

They’re also a source of riboflavin, which can help you have healthier-looking skin.