I rooted for Team USA to make every podium at the 2021 Olympics, but I also found myself enjoying the some of the upsets, the surprise victories, and the small moments between competitors, even when it meant my favorite athletes didn’t make the cut for a medal.

Did I want the USA softball team to win gold and avenge their 2008 loss to Japan? Of course – but there was also something incredibly special about watching the Japanese team win its second Olympic gold in its home country. Of course I want Katie Ledecky to win every single race she’s in, but how could you not love the celebration of Ariarne Titmus’s coach when the Australian swimmer beat Ledecky in the 400m freestyle?

When the Olympics roll around, I’m all in on Team USA. Every sport, every event, from 1 a.m. soccer games to 9:30 p.m. basketball tipoffs (gotta love that Tokyo time difference!), I’m out here whisper-screaming into my laptop screen as American athletes push for the podium.

As much as I appreciate the athleticism and accomplishments of the athletes from other countries, there’s only one flag I want to see lifted in the center of that medal ceremony. 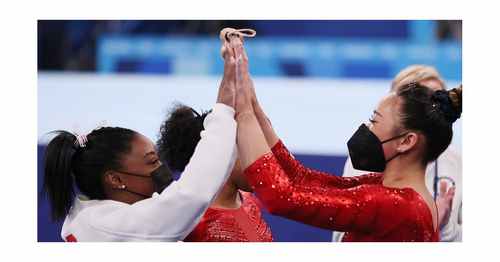 It feels like this Olympics was about a lot more than medal counts, podium ceremonies, and nation-versus-nation action. It was a celebration of the effort put in by every athlete from every country just to be there, competing under unsettling circumstances after an extra year of unexpected training in the middle of a pandemic.

The sportsmanship we saw across countries and events only underscored that, showing that even when athletes fell short of gold or the podium, they could appreciate and respect their fellow competitors and the work they put in.

Hugs across the lane lines in the pool, sharing medals on the track, hefting athletes in the air after a bad spill at the skate park: these moments of mutual empowerment and sportsmanship reminded us that being an Olympian isn’t just about the color of the medal that goes around your neck, but the respect you show to your opponent and the struggles and sacrifices it takes to make it to the Games.

Ahead, relive some of our favorite moments of pure sportsmanship from these Olympic Games that’ll give you even more respect for these athletes and role models.

Netflix has a new football docu-series on deck, but this time the subjects aren’t pros or college athletes. We Are: The Brooklyn Saints drops Jan. 29 and follows a football program of seven- to 13-year-old boys in inner city Brooklyn.

While the players unite and connect through the game, football is far from the series’ only focus; in the trailer released today, we see the boys going after goals in school and meshing with their families, friends, and coaches on and off the field. “We teach the kids fundamentals of football,” a coach explains in the trailer. “We teach them how to be young men.”

The series follows the team through their season, witnessing the players’ “power on and off the field, as they celebrate victories and overcome losses, both personal and athletic,” according to a Netflix press release. We’re already invested in this team and its adorable, spunky, tough-as-nails players, but the documentary’s power goes beyond that, according to director and executive producer Rudy Valdez.

“Growing up, I rarely saw people who looked like me as the heroes of their own stories,” he said in the press release. In this series, Valdez focused on showing main characters “with agency and from their own perspective; rather than the one often assumed for them. This series exists for them and those who will watch it with the hope that a new generation will never have to wonder what it looks like to be the hero of your own story.”

These are the 12 signs you might be dating a narcissist