It’s hard to kick the smoking habit, but an inexpensive diabetes drug may be able to help.

A study on mice led by researchers at Johns Hopkins University found that metformin, a drug used to treat type 2 diabetes, could block symptoms of nicotine withdrawal, especially cravings.

Cigarette smoking is the leading cause of preventable death, and previous studies have found that brain changes occur in people who decide to give up the habit, which may be the cause for many relapses.

Based on the new findings, researchers conclude that metformin, which costs a little over $20, could be prescribed as a smoking cessation aid for people trying to give up cigarettes. 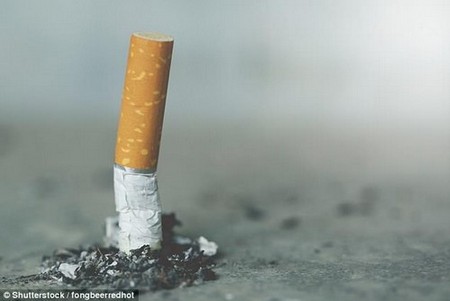 Smoking kills nearly six million people a year, according to the Centers for Disease Control and Prevention. With 16 million Americans currently living with a disease caused by the habit.

A 2013 study published in the Drug and Alcohol Dependence found that people who have stopped smoking for 12 months or less had a more than 50 percent chance of relapsing.

Researchers of the current study said this may be due to withdrawal-associated anxiety.

Scientists led by Dr Sangwon Kim, an associate professor of medicine, wanted to activate an enzyme known as AMP-activated protein kinase, or AMPK, which is activated following chronic nicotine use, but repressed during withdrawal.

Previous studies have shown that metformin, which is used by nearly 120 million people worldwide, activates these enzymes – research published in a 2014 issue of Metabolic Brain Disease found that metformin activates AMP-activated protein kinase activity in the brain.

Dr Kim and his colleagues wanted to know if this enzyme, stimulated by metformin, could lessen or even eliminate the symptoms of nicotine withdrawal.

Researchers gave mice either nicotine or a solution of water and salt for about two weeks. Before nicotine cessation, the investigators chronically gave the mice metformin.

When they stopped giving mice the nicotine, researchers measured the mice’s behavioral responses for up to 48 hours, because the first two days of withdrawal are associated with the highest rate of relapse in humans.

They found that nicotine-treated mice that were given metformin displayed none of the anxiety or other negative effects of withdrawal. Metformin, the researchers found, completely prevented anxious behaviors caused by nicotine withdrawal.

‘The biggest surprise was the very same pathway that most of diabetes drugs try to target was altered in the brain during nicotine exposure and withdrawal,’ Dr Kim told Daily Mail Online.

Previous studies have found that smoking cessation can cause brain changes that make people vulnerable to relapse.

However, Dr Kim believe that in proper doses, metformin might treat the withdrawal symptoms without the side effect of throwing blood glucose out of balance.

Dr Kim said he isn’t sure with the diabetes drugs have this effect of nicotine withdrawal symptoms, but he said numerous studies are examining a protein called ‘CREB’ which plays a critical role in (drug/nicotine) addiction and behavior associated with withdrawal.

‘However, very few studies were done to investigate how a change in this protein can further contribute to addiction/withdrawal behaviors,’ he said.

‘Therefore, we performed unbiased screening to identify the additional molecules which can be modulated by “CREB” in the brain and found that the very same pathway the most of diabetes drugs target was altered in the brain during nicotine exposure and withdrawal.’

Dr Kim said another benefit of metformin is that it can lead to mild weight loss for former smokers since cessation has been linked to an increased appetite and weight gain.

Researchers said more studies are needed to figure out the effective dosage for humans.

‘But considering the safety profile of this drug, the outcome is very promising,’ he said.

Could IV vitamin drips actually be harmful for your health?