The World Health Organization refers to micronutrients – which include vitamins – as ‘magic wands,’ but it seems as though that description has been blown out of proportion.

Dietary supplements are often treated as an instant fix to a nearly-infinite assortment of problems: aging skin? Take some calcium. Weak or brittle nails? Try a B vitamin. Feeling down? You’re probably not getting enough sun, but you need not go outside when you have it in a Vitamin D capsule.

Vitamins and minerals can make up for deficiencies that strike certain groups – like pregnant women or elderly people – but experts say their benefits for the general population are unclear.

Daily Mail Online spoke to nutritionists who explain when enough is enough for dietary supplements, and which ones may actually harm your health. 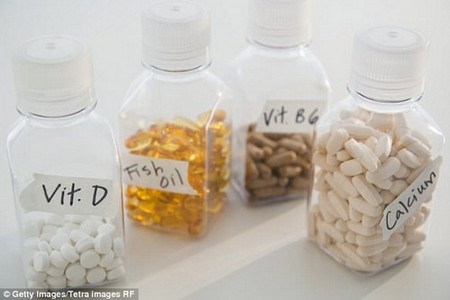 As many as half of all Americans take daily vitamins, some estimates suggest.

But it may be a mistake, according to experts.

‘In general populations, vitamin supplements have never been shown to be of any benefit,’ says Dr JoAnn Manson, a Harvard professor and the Brigham and Women’s chief of preventative medicine.

Though, as a caveat, she adds: ‘When I say that this is not routinely recommended, this acknowledges that they may be [recommended] in certain high risk groups,’ including those with certain conditions, pregnant women and the elderly.

There are more than 90,000 vitamin, mineral and other dietary supplements on the market in the US, and many Americans – from children all the way up to centenarians – pop them like candy.

The supplements industry brought in $36.1 billion in 2017, according to numbers from Statista.

And that’s important to remember when assessing the health values of vitamins, says Dr Manson, who worries those who swear by them may be ‘misplacing their energy.’

‘There is the issue of people spending money day in, day out, on these supplements and spending time, so they may become more complacent about the importance of a heart-healthy diet and lifestyle modifications like physical exercise,’ she says.

Dr Manson, who is has been involved in two major trials of vitamins and is principal investigator of several research studies that are testing nutritional supplements, says that this might be okay for multivitamins, but that other high dose capsules could even be dangerous.

Multivitamins are safe because they mimic your dietary doses

Depending on what brand you buy, the contents of a multivitamin may vary, but they often include several B vitamins (including B1, B12 and biotin), Vitamins A, C, E, D, K, and a number of minerals like calcium, magnesium and potassium.

‘A multivitamin is fine, for those that want to a form of insurance and hedge their bets,’ Dr Manson says.

This is because multivitamins ‘tend to provide smaller doses [of each vitamin], consistent with your daily intake,’ she explains.

In one large study, taking multivitamins was even associated with a lower risk of all cause mortality, but it should be noted that it was only done in men, and needs to be confirmed in a larger study.

‘Then again, it is true that the American diet is increasingly stripped of important vitamins and minerals,’ Dr Manson says.

Yet, in recent years, multivitamins – which research suggests are probably the safest, most useful supplements – have fallen out of favor: From 1999 to 2012, the number of Americans taking multivitamins fell by about 16 percent, according to a 2016 study.

Higher-dose, single vitamin supplements, on the other hand, are have become more popular, despite their research linking them to serious health risks.

Vitamin E is advertised to improve the immune system skin and eyes, at a dose of 1,000 mg per day.

The vitamin helps fight off free radicals, the byproducts of oxidation that attack healthy cells, chipping away at overall health.

It is crucial to get vitamin E, which is found in nuts, green vegetables and their oils, but deficiencies are quite rare.

For a woman between 50 and 75, for example, Harvard University recommends that a sample meal that meets daily nutritional values would include 11 mg of vitamin E – meaning that if she at three meals she would still only ingest 33 mg of the nutrient.

Worryingly, taking vitamin E has been linked to ‘the bleeding type of stroke, heart failure, prostate cancer in men, and even all-cause mortality,’ says Dr Manson.

Vitamin E was actually once thought to help protect men against prostate cancer. But a large 2008 study made headlines when it revealed that the same men who had taken the vitamin to combat the cancer were more likely to develop it.

Out of the 35,533 men in the study, those that took vitamin E were 17 percent more likely to develop prostate cancer than the others.

Vitamin A poisoning can be deadly

Dietary vitamin A helps to ensure immune system and reproductive health and to maintain normal vision.

For children, a rare vitamin A deficiency may put them more at risk for the measles, so taking the supplement can be corrective.

But, in too high a dose, vitamin A can bring about side effects that range from unpleasant to deadly.

‘Fairly large doses can get you into real trouble,’ says Dr Paul Thomas, a nutritionist at the National Institutes of Health.

In fact, in 1913, arctic explorers lost, stranded in a snow storm and starving, ate the livers their Huskies, which – unbeknownst to them – were chocked full of vitamin A, which is toxic to the livers of humans. The man that ate the most liver developed vitamin A poisoning.

Vitamin A poisoning in mild cases may simply involve diarrhea and nausea, but the explorer had ingested so much of the vitamin that he became delirious, developed a fever and eventually died.

The nutrient has also been linked to birth defects, so Dr Thomas and the NIH recommend pregnant women stay away from this supplement.

Vitamin C and calcium can upset your gastrointestinal system

Even though most people take far higher doses of either of these nutrients, they are ‘not going to do you in if you over do it,’ says Dr Thomas.

The upper limit of vitamin C for adults is 2,500 mg a day. You’d have to eat 50 oranges to surpass that – but only take two-and-a-half Airborne tables, despite the fact that the packaging says you can take one up to three times a day.

If you do get an overdose of vitamin C, you might wind up with stomach cramps, nausea and diarrhea.

These effects are unlikely to be cause for serious concern, but most research suggests that vitamin C doesn’t have the protective effects so many hope for.

‘Vitamin C is thought of as helping to prevent the cold or flu by boosting the immune system, or as helping to reduce symptoms and shorten duration, but on the whole studies have shown that that is probably not the case,’ says Dr Thomas.

It might be helpful to marathon runners, who are more susceptible to upper respiratory infection just after the event, but the effects are likely negligible for anyone else.

Taking more than 2,500 mg of calcium will also have gastrointestinal effects as well, but to the opposite end: it may cause constipation, and some research ha
s linked it to a higher risk of kidney stones.

Mixing and matching vitamins, minerals and medicines may pose risks and definitely is not a magical cure

The wealth of vitamin options and problems they supposedly fix may lead some people to take a handful at once.

The risks of doing so have not been clearly established by research, but ‘There is the potential for adverse interactions and decreased absorption of some of these micronutrients because of some high dose of another micronutrient,’ says Dr Manson.

She advises that a multivitamin is fine, but ‘if you are taking lots of other medications, you really should talk with your healthcare provider about whether or not it is a good idea to be taking dietary supplements.’

Vitamins may interact with some drugs to increase the risk of bleeding, for example.

Like Dr Manson, Dr Thomas worries that even if they themselves don’t have direct adverse effects, the hype around vitamins may be indirectly fueling destructive habits for people that take them.

‘Sometimes people take them for reasons that are not justified or to justify their own bad behaviors, like taking them as a hangover cure or to reduce the effects of smoking on the body,’ he says.

But there is not proof that vitamins can accomplish either, although Dr Manson is in the midst of two large studies that may provide clearer answers as to whether the supplements have any preventative effects for cancer.

Overall, we ‘shouldn’t assume that a mega-dose of a vitamin or micronutrient supplement is totally safe, because the risks have been identified with high doses,’ says Dr Manson.

Yet, people ‘take vitamins for all sorts of reasons, dietary supplements for a lot of people convey this hope that they may be beneficial or help with various issues or health conditions…often without great or even any scientific evidence,’ says Dr Thomas.