Lacey Henry, 18, a senior at Cumberland Polytechnic High School in Fayetteville, N.C., convinced administrators to allow girls the option of wearing pants to their May 21 graduation, according to the Fayetteville Observer.

A teen “tomboy” changed the dress code at her high school that required girls to wear dresses at graduation.

“It’s kind of insane – no one can see what’s under our graduation robes anyway,” Henry tells Yahoo Lifestyle. “Heavier students are always in violation because their clothing can be tighter in some places and guys show their bare chests. The district once barred a girl from attending her own graduation ceremony – even as an audience member – because she wore pants.”

In mid-February, Lacey pulled her thoughts together in a Change.org petition that amassed at least 780 signatures. “As a young woman in 2019, the students expect freedom of dress and choice for their body, but instead, their bodies are over-sexualized and objectified,” she wrote. “It is time for Cumberland Polytechnic High School to step into this century and remove these patriarchal standards for their students.”

Then she sent a letter to her principal and district superintendent, copying the American Civil Liberties Union of North Carolina. She received a fast  response from principal Daniel J. Krumanocker Jr. that quoted a press release from the district promising to follow Title IX:

Cumberland Polytechnic High School revised its dress code, an alleged copy of which is shown above, allowing girls to wear pants at graduation – with a necktie.

“Cumberland County Schools’ Regulation Code: 4316-R3 Graduation Student Dress Code provides guidance on regalia requirements for high school graduations. Some additional graduation attire guidelines are developed at the school level to ensure all students are dressed in a manner appropriate to the solemnity of the occasion. However, school-level graduation guidelines will not require students to conform to a specific type of attire based on their gender, and they will be fully compliant with Title IX and the Equal Protection Clause. We will continue to provide guidance to schools as they finalize their graduation guidelines for the Class of 2019.”

Krumanocker allegedly wrote that an updated dress code would be presented during a Feb. 12 school meeting.

Henry says the school allowed her to view and sign the revised rules on a PowerPoint presentation, a screenshot of which she sent to Yahoo Lifestyle. But the Henrys disagree with the amended language that requires anyone wearing pants to also wear a necktie. “It’s ridiculous to make girls wear ties,” says Kathleen. “It seems like the administration wants the last grasp of control over these kids.”

“It’s definitely a deterrent for girls,” Lacey tells Yahoo Lifestyle. “But I will wear pants and a tie.” 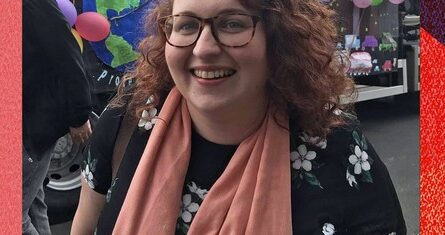