As if one royal wedding wasn’t enough for this year, Princess Eugenie and her fiancé Jack Brooksbank today walked down the aisle of St George’s Chapel, Windsor Castle.

Arriving with her father Prince Andrew, the Princess stunned as she stepped out of the car wearing a wide-v-neck gown with a folded, capped sleeve and Charlotte Olympia shoes. 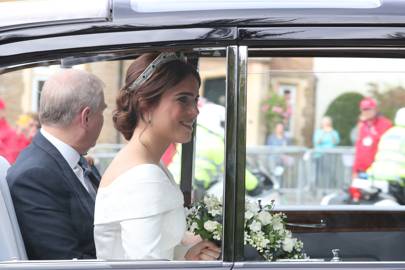 In an unexpected turn, the Princess opted for a relatively under-the-radar British brand Peter Pilotto to design the dress.

After much speculation – in which designers such as Erdem, Stella McCartney and Jenny Packham were thrown into the pot – the reveal was a welcome surprise. 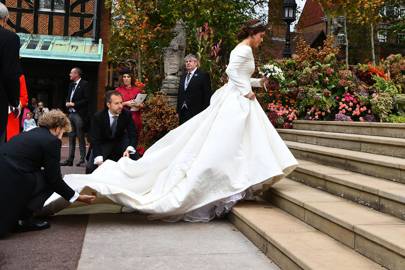 A heavily-embroidered piece, the stunning gown featured long sleeves, an enormous train and heavy embroidery creating a beautiful silhouette as she knelt at the the altar.

And the dress’s details weren’t purely for aesthetic purposes, instead offering some very sentimental touches.

“The fabric was designed by Mr Pilotto and Mr De Vos at their studio in East London and includes a number of symbols that are meaningful to Princess Eugenie as motifs,” said the brand.

“The symbols are a Thistle for Scotland, The Shamrock for Ireland, The York Rose for England and The Ivy representing the couple’s home.” 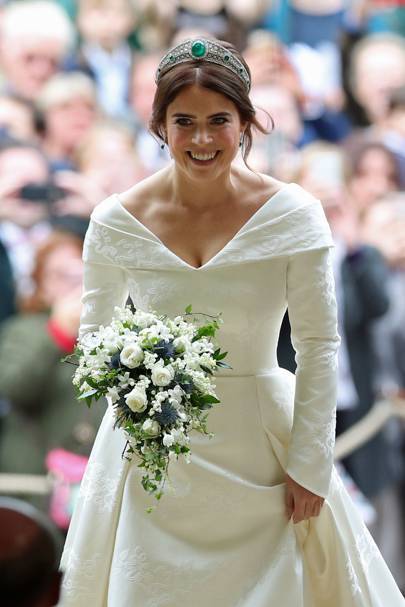 “Peter Pilotto and Christopher De Vos have reinterpreted these symbols in a garland of rope like motifs, woven into a jacquard of silk, cotton and viscose blend.”

“Once the artwork was completed, it was translated into a Jacquard weave in the Como region. The result is a very modern looking fabric using a highly intricate weaving technique.”

Another unexpected move came in the veil realms… or rather, the lack of one. Instead opting for a stunning tiara, it was perhaps a smart move considering the day’s high winds.

Unlike many brides, Princess Eugenie was incredibly decisive when choosing her dress.

Speaking to British Vogue ahead of the wedding, “[The dress] is the one thing that I was really decisive about.”

“As soon as we announced the wedding, I knew the designer, and the look, straight away.”

“I never thought I’d be the one who knew exactly what I like, but I’ve been pretty on top of it.”

And it wasn’t just the bride who stunned on the day… Scroll down to see Eugenie’s Royal Wedding’s most stylish guests. 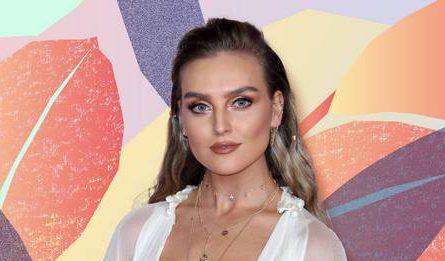