The right girls, holding their nose in the wind of fashion, already understood that the style of American teenagers and their idols, the so-called r’n’b, often mockingly translated as rich beautiful, is something that you need to forget about as a terrible dream.

Including categorically it is not recommended to use in everyday (and even more so off) clothes one of the main points of the “Harlem” fashion – brazenly sticking out from under the pants of a thong. The linen returns to what it is – to the intimate toilet thing. About what is worn under the dress and even jeans with a low waist, nobody should be aware, except for whom the young lady deems it necessary to demonstrate this. It is desirable – by candlelight.

The fact that underwear is just the bottom does not mean that the appearance of the “inner world” does not matter now. Luxury and minimalism are two opposite lines, peacefully neighboring in the world of fashion for lingerie.

Simplicity, modesty, “innocence” and convenience of models are characterized by minimalist, youth models, and the “ladies”, luxurious line is distinguished by the richness of the finishes, sophistication and emphasized femininity. However, both there and there are only laws – fashion trends concern everyone. The showcases of the shops of the underwear are dazzling and attract the eye – this spring at the peak of popularity panties of “innocent” shape, but sewn from the materials very piquant.

Whatever gynecologists say about the dangers of strings, this model remains the leader. However, the thongs are not dressed up as much as before. Many young ladies realized that a closed body has a much greater appeal than a shamelessly exposed. And more and more popular in connection with this is using a less explicit model of panties – shorts. 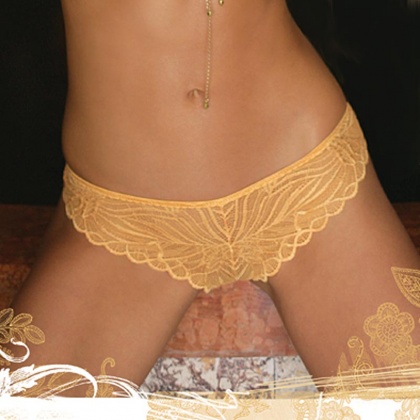 Natalia Ovchinnikova, manager of Milavitsa Trading House, believes that the thongs will not give up their positions: “The thongs are selling very well. They have become even more open this spring – the waist is very understated. But, of course, except for strings, a more modest model – shorts – has become very popular: it can be found not only in the youth, but also in the “lady’s”, the so-called corset line. ”

Dina Frigant, the director of a network of shops “Incanto” in Novosibirsk, considers, that shorts – an ideal model for daily wearing: “Shorts are very convenient. Now let out panties without seams – they do not stand out under tight clothes, as well as thongs, and, unlike the latter, are more comfortable to wear. Erasers on shorts are replaced by silicone strips, so nothing hinders, does not put pressure – panties are felt almost like a second skin. ”

Those who can not choose between the two models – the thongs attract their invisibility from the rear, and the shorts – with the maximum closeness of the frontal part – can stop at the symbiosis of two forms-gaining popularity of shorts with a narrow strip of fabric behind.

Dina Frigant: “Modern underwear can be called modest only in form, but in meaning even modest shorts are very playful – for example, they are made of almost transparent matter, with a greatly understated waist “. 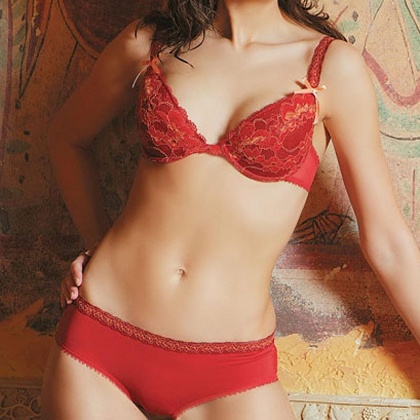 If in the winter the palace style of linen was offered, fabrics were used heavy, “portier”, then in spring the most actual materials of panties differ transparency and coquettish refinement of decor.

Natalia Ovchinnikova, “Milavitsa”: “Transparent mesh and net with embroidery – hit this spring. Also there are interesting models from flock – stuffed on a grid of velvet. As for the flowers, now it is actual colored underwear. By the way, red color is already enrolled in classics, along with white, beige and black. ”

Looking at modern collections, it is difficult to imagine that as early as the beginning of the twentieth century, colored linen was considered the height of impropriety – it only sported girls of dubious moral principles. This spring is especially popular bright, fresh, saturated colors – lime, pink, orange, blue.

If briefly summarize the above, then the trend of the season are light green shorts with a mesh and embroidered with pink flowers. However, to abandon the classic black, white and beige (and even red) panties still not worth it. Even if no one knows what kind of linen you are wearing, it remains a mystery, dictates your mood and guides your senses. So, going to a business meeting, it’s better not to risk – in pink lace shorts, it’s simply not possible to flirt.

Old Navy Just Got in the Cutest Shoes

Basket right now and treat yourself to post-lockdown

Nike Released Pastel Sneakers So Cute, Even Unicorns Would Be Jealous