Remember your first period? I do, I was 11, I had no idea what was happening and didn’t really know what do, and was too embarrassed to ask. So I stuffed my pants with toilet paper and hoped it would go away.

My periods started to take all sorts of wobbly shapes and flows. Sometimes so heavy that I couldn’t leave the house. But I was still too embarrassed to speak out. For years I endured the pain and the inability of a period that I was too scared to share.

One day I took the courage to tell someone what I was going through, and to my surprise, it was the best thing I ever did. They had experienced exactly the same thing and had so much advice that really helped me. I learnt not to hate my body for the pain it was causing me, to seek the support I needed and to accept my body and my period for all its flaws. It’s an ongoing love/hate relationship.

But this is my period. It’s not perfect but it’s what makes the world go around, none of us would be here without one. 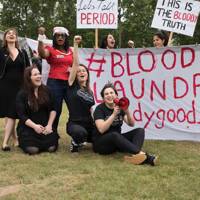 Now, more than ever, we’re at a time when it’s becoming easier to talk about our bodies and our periods more openly. Magazines, podcasts and the media in general is also making it an easier conversation for us to have. But we have to remember that it also doesn’t give us the full picture.

Whilst we’re becoming more comfortable talking about periods in the UK and the government is finally starting to listen to our demands about tampon tax and free periods, we have to remember that there’s millions of girls out there that aren’t afforded this yet and still can’t even say the word ‘period’ in public.

The time has come to make sure that we break the geographical barriers that make periods a political issue and something that we fight within our home countries. This is our period.

This device apparently ‘switches off’ your period pain

It’s our time to make sure we’re talking about women, girls and people that bleed everywhere.

We can’t afford to not fight for everyone’s period needs, because while we’re silent, there’s millions of women and girls scared to talk about their bodies, their period and their menstrual problems, and Governments everywhere are able to let the problems we’re facing remain invisible.

In the UK, 137,500 girls missed a day of school last year not being able to afford period products. And in countries such as Kenya, the problem is on a different scale. 65% of women and girls are unable to afford sanitary pads at all, while mums often don’t buy sanitary items for themselves so that they can pay their children’s school fees. And there’s an even darker side to this; a study found that 1 in 10 15-year-old girls in Kenya were having sex to buy sanitary ware.

This is our period to push for progressive period policy everywhere, so that no woman or girl or person that bleeds needs to miss school, or work, or seeing their friends or suffer the awful impact of not having sanitary pads. Having a period is not a luxury, it is essential to life, and it needs to be treated so.

The best thing I ever did was talk to someone about my period and then another person and another person, and now it’s what I spend the majority of my life doing. I’ve been connected to the most incredible people working towards an end to period poverty, and now the movement is growing. This is our period.

Project Period is a movement that has grown to maximise awareness around the growing problem of period poverty and bring progressive period policy onto the global agenda. The movement believes that ‘this is our period’ – now is the time to make sure that everyone woman that bleeds, anywhere in the world, has the products she needs. Holly Bantleman is part of Project Period, a campaign bringing together activists and practitioners to maximise momentum on efforts to bring progressive period policy onto the global agenda. Here, she’s written an exclusive open letter for GLAMOUR UK to young girls out there to educate them on all things period poverty.

This ultimate mindfulness guide will help you sleep better, feel calmer and relax your mind

Why 2019 will be the year, of the male feminist