Yes, that is an infinity pool in Manchester city centre. King Street Townhouse boasts a spectacular view of the Town Hall clock from its spa pool, while inside, none of its 40 stylish rooms are the same.

Some have monsoon showers and free-standing baths, and elsewhere in the hotel you’ll find a restaurant, cinema, steam room, gym, spa and beauty treatment rooms – and of course, that pool. 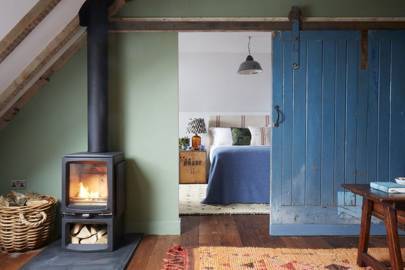 A laidback boho hotel in the laidback boho town of Penzance, Artist Residence is the ideal place to hole up after a day pottering about Penzance’s antique and junk shops, meandering down the beautiful coastline, or exploring Land’s End and St Ives (both 30 minutes away). Each room is designed by a different artist and the restaurant – serving up the likes of smoked lobster and barbecued ribs from its own smokehouse – is not to be missed.
From £95 per night. 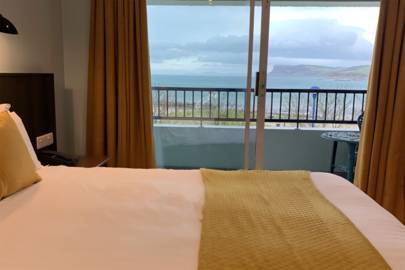 Northern Ireland’s pristine Causeway Coast is so vibrant and its water so aqua-blue it’s hard to believe it’s in the UK. Perched on the beach close to the marina, The Marine Hotel has 41 rooms and a restaurant overlooking the seafront serving up fresh seafood, Sunday roasts and, of course, plenty of Guinness. Visit Game of Thrones filming locations, learn to surf, see puffins at Rathlin Island or snap photos of the very Instagrammable Carrick-A-Rede Rope Bridge or The Giants Causeway.
From £110 per night. 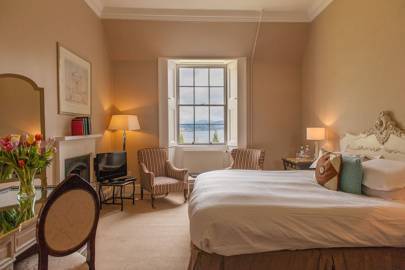 The location of this 19th century house is perfectly secluded, right by the water’s edge of Loch Awe, in 240 acres of wooded grounds and beneath the towering Ben Cruachan mountain. It’s anything but stuffy though, in fact the style is one of its main draws, with lavish and flamboyant decor (think vibrant walls and kooky antiques sourced by, unsurprisingly, owner and antiques dealer Bennie Gray). You can’t leave without trying dinner from award-winning chef Colin Cairns.
From £120 per night. 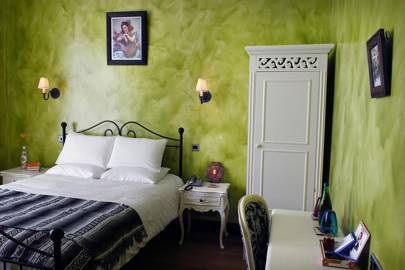 This is a real hidden gem of a London hotel. Near King’s Road and within walking distance to heaps of shops, bars and restaurants, the interiors are polished and warm, with a garden at the back too. Even though it’s in the upmarket Chelsea area, it’s like going to stay with your welcoming friend who has seriously good taste.
From £88 per night. 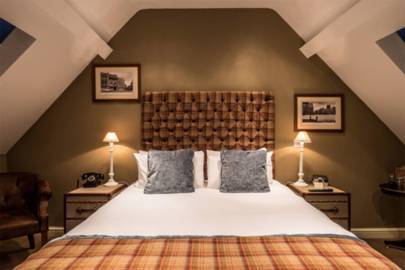 The Bell at Stow, Cotswolds

Located in the pretty village of Stow-on-the-Wold, this traditional country property is a favourite with locals and those looking for a chilled out staycation. As well as 13 rustic en-suite rooms, at the very heart of The Bell is a beautifully appointed pub and dining room – come at the weekend to enjoy the Sunday roast.
From £99 per night. 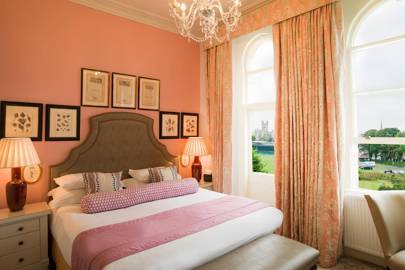 This independently-owned boutique hotel is bursting with colour and ornate decorations, with many rooms offering views out over Bath Abbey and the Recreation Ground. Attractions such as The Roman Baths, Jane Austen Centre and The Victoria Art Gallery are in walking distance.
From £103 per night. 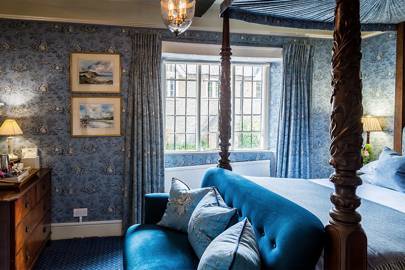 This 16th century old coaching inn – with its old beams, low ceilings, flagstone floors and roaring open fires – is the definition of characterful and cosy. The Acorn Inn offers ten individually decorated bedroom, each named with a Thomas Hardy theme (the author lived in the area and references the inn as ‘The Sow Acorn’ in Tess of the d’Urbervilles), as well as an award-winning pub and restaurant serving up hearty country grub.
From £115 per night. 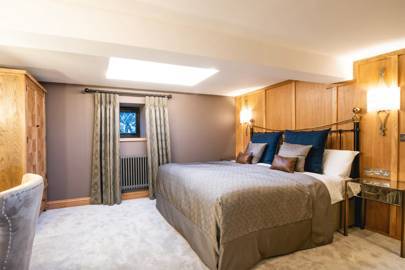 A five-star hotel perched on edge of sprawling Dartmoor National Park, it’s hard to believe you can stay at such a luxurious and historical property for such a reasonable price. With close proximity to the beach, an award-winning Gaia Spa and high-quality food, this is a weekend retreat for serious relaxation and pampering.
From £135 per night. 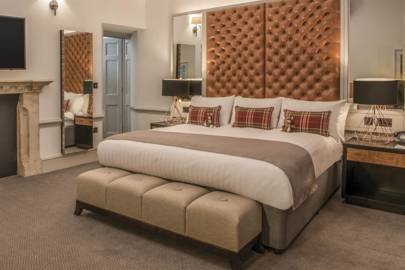 Looking for a staycation full of proper English grandeur and history? You can bag a stay at this 18th-century mansion estate for a true bargain, given its 40 acres of parkland, the spacious and comfortable rooms, and its close proximity to Windsor Castle, the oldest and largest inhabited castle in the world. At one point, the house was a public boys’ school, and there is a memorial in the grounds to commemorate ex-pupils who lost their lives in the Great War.
From £84 per night. 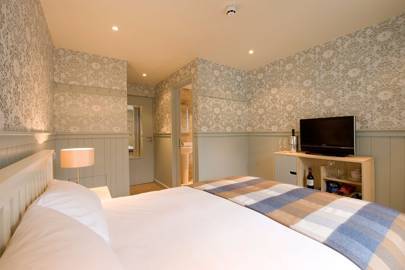 This property is one of a small family-owned chain of affordable luxury city centre hotels (the others are in Bath and Edinburgh). This hotel is conveniently nestled in the heart of the old quarter and comprises 24 rooms plus four quirky ‘airstream caravans’ on the roof. The hotel courtyard spills out into St Nick’s Market which is home to some amazing independent food outlets, serving everything from Japanese gyoza to Middle Eastern wraps, with tables outside for summer dining. Head harbourside for sunset drinks or try your hand at stand up paddle boarding.
From £62 per night. 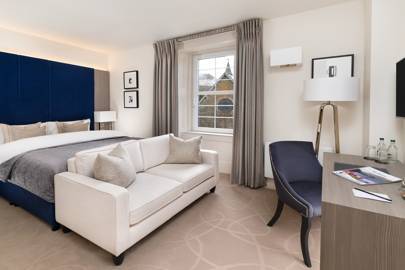 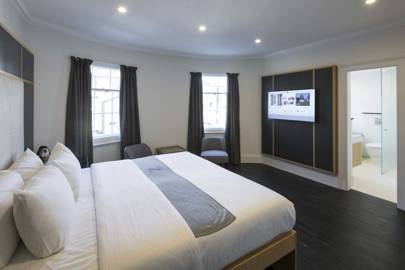 The central location of this hotel is pretty unrivalled at this price – it’s a sleek conversion of some Georgian townhouses on Gloucester Place, walking distance to Marylebone, Baker Street, Oxford Street and so on. The rooms here are generally larger than you’ll find at most Z Hotels because the Georgian townhouses are listed properties, with high ceilings and a good amount of space.
From £135 per night. 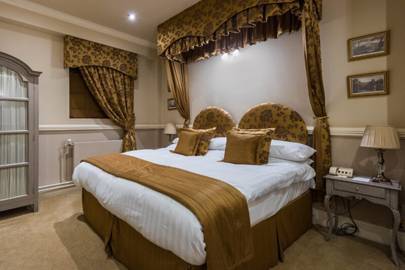 A posh boutique hotel with very affordable rates, Lumley is a 14th-century castle overlooking the River Wear with 73 rooms (think four-poster beds, feature baths and views over the parkland) and a newly refurbished restaurant.
From £71 per night. 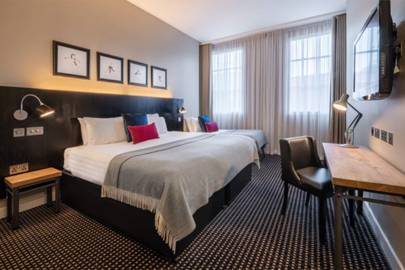 Sitting in the heart of Liverpool centre’s fashionable Ropewalks district, in an equally fashionable converted warehouse, The Resident makes a smart base from which to explore the city. Just a short walk away are the Albert Dock, Tate Liverpool, The Beatles Story, and the world-famous Cavern Club.
From £52 per night. 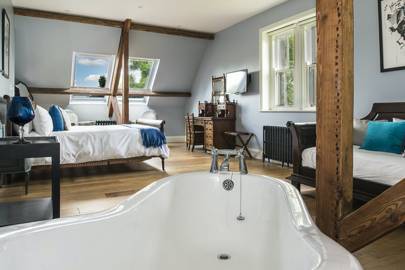 Overlooking the breathtaking hills and valleys of Yorkshire Dales National Park, Stow House is an updated Victorian vicarage that perfectly balances old-world antique flair with modern amenities and comfort. Alongside exposed rafters are claw-foot tubs and flat-screen TVs, while Aysgarth Falls and the medieval Bolton Castle are nearby attractions not be missed.
From £110 per night. 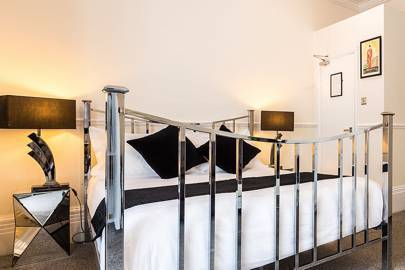 Brighton stays, especially with as much quirky charm as this, can be pricey – but Paskins has stayed affordable while becoming a much-loved B&B. The rooms are Art Deco and filled with 1920s junk shop finds and period furniture. One of the first vegetarian-friendly hotels in Brighton, the breakfast is not to be missed (think homemade fritters and veggie sausages made with sun-dried tomatoes and tarragon).
From £80 per night. 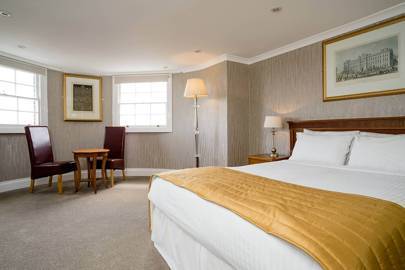 The 175-room independent Clarendon Hotel overlooks London’s Blackheath and is just a few minutes’ walk from the village. Rooms are contemporary and clean with en-suites and TVs, and you can enjoy an afternoon tea in the Meridian Restaurant or in the gardens.
From £109 per night. 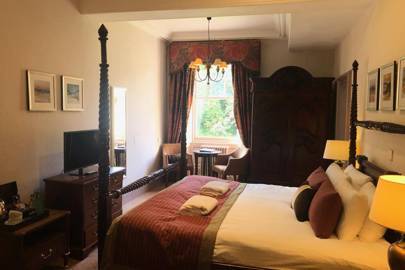 Built in 1837, Stonefield Castle is set in 60 acres of woodland gardens on the shores of Loch Fyne, with rooms boasting beautiful views of its surroundings. Enjoy a hearty Scottish breakfast before exploring the nearby idyllic fishing village of Tarbert, one of the most picturesque on the Mull of Kintyre peninsula.
From £90 per night. 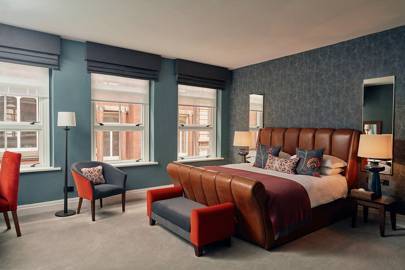 With 66 stylish rooms and suites, this Hotel du Vin is ideal for a weekend exploring the cultural city of Birmingham. The rooms are far more characterful than you’d expect of an affordable hotel in a big city, with accent walls, leather sleigh beds and sometimes freestanding baths.
From £79 per night. 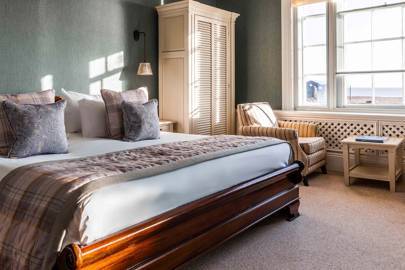 Overlooking the beach and fishermen’s huts on Suffolk’s Heritage Coast, the White Lion Hotel has stunning sea views and is a mere stroll from the town centre’s shops and galleries. There’s exotic Indian cuisine at the Sea Spice restaurant and breakfast in the Brasserie, but the hotel’s crowning glory is the fresh, local produce at the Brudenell Hotel’s Seafood Grill, a short walk along the seafront.
From £115 per night. 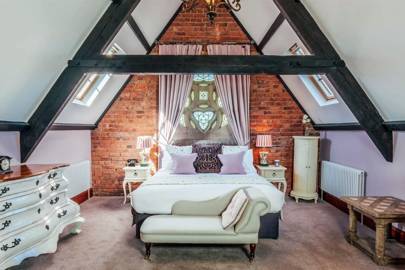 A former abbey, this astounding hotel is full of heritage and charm – it dates back to the early 16th century – and is set within 26 acres of serene Worcestershire countryside. Every level of this property has a story to tell – in the basement, there’s a wine cellar and tasting area, a games room and the original bake house where the nuns used to make their own bread. Or climb up the Abbey’s 40 metre bell tower for stunning panoramic views of the Malvern Hills and surrounding countryside.
From £84 per night. 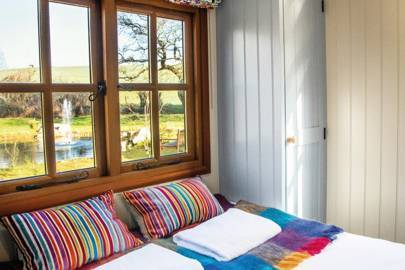 Countryside retreats don’t get more idyllic than Merry Harriers. This refurbished country inn has six garden rooms and five Shepherd’s huts with views of the Surrey Hills and an outdoor log fire pit, from which you can enjoy llama trekking, walking and cycling routes, the local gin distillery and vineyards.
From £110 per night. 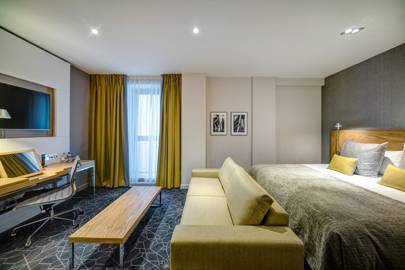 If you’re looking for an affordable base from which to explore Glasgow, this is it. Occupying a prime location in the heart of the city’s shopping and entertainment district, it’s a contemporary, slick hotel from the family-run Apex group. The standard twin or double rooms are ideal for a couple or two friends but pay an extra £10 and you’ll get a room with a city view – worth it.
From £99 per night. 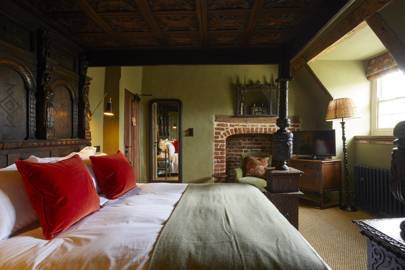 The Pig at Bridge Place, Kent

The latest from The Pig group, this country house has transformed a Grade II listed building where locally-sourced Kentish food is the name of the game. There’s an expansive kitchen garden and a barbecue and ‘Garden Oven’ for flatbreads and outdoor eating. Pamper yourself at the ‘Potting Shed’ treatment rooms using luxurious Bamford products.
From £109 per night. 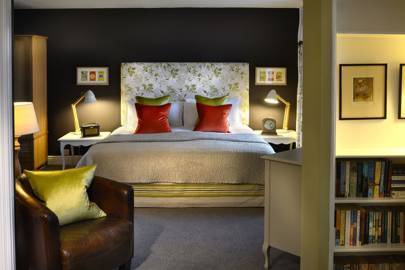 With glorious Lake District views, roaring fires, quirky interiors, local beer and a serious – but not stuffy – menu, The Drunken Duck is a widely-loved establishment, and it’s easy to see why. Don’t miss the nearby walking routes around the lake.
From £100 per night.

Everything you need for Lockdown: The Sequel