I’ve been gripped by the new BBC four-part drama Ridley Road, set in the 60s (it’s worth watching for the costumes alone), about the little-talked-about rise of right wing fascism that pervaded London in the swinging 60s – and the 62 Group (a militant coalition of anti-facists set up in 1962 in response, in particular, to the creation of pro Nazi Colin Jordan’s National Socialist Movement) that fought it.

The drama follows a young Jewish hairdresser called Vivien Epstein, who goes from Manchester to London to chase after her secret lover Jack, (played by Game of Thrones actor, Tom Varey,) only to discover he’s living undercover as part of NSM. Before long, she too infiltrates the group and finds herself dangerously up close and personal with Colin Jordan. It’s edge-of-your-seat TV.

Vivien is played by 25-year-old London-born, Devon-bred actor Aggi O’Casey, who was literally plucked from drama school in Ireland to play the lead role. Although Aggi’s character Vivien is fictional, “there are a lot of things that happen in Ridley Road that are based on truth,” she tells me when we meet in the garden of her favourite North London artisan cafe. “I had to do so much research as I had no idea about this period. It’s been totally buried.

We don’t like to think of ourselves as facists, we think ‘good old Churchill.’ You’d think this story would have been told more, especially with the success of the 62 Group, but it doesn’t fit in with our British narrative about the war.” 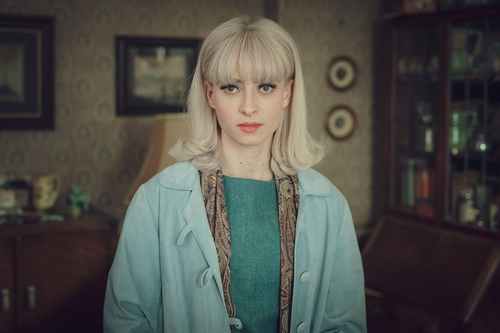 Was Colin Jordon a real person or a fictional character?

Like many, Aggi thought Colin Jordan was a fictional character. “When I was first asked to audition, I called the producer and asked what the actor who played Colin Jordan would look like, so I could get a sense and she said, “No he’s real. Go and research him.”  I thought, There’s no way I’ll get the part because I was so ignorant.

But once you do a deep dive there’s so much about him and his wife, French socialite, Francoise Dior, (depicted in the show – niece of designer Christian Dior, who publicly distanced himself from her when she married Jordan). You can watch their wedding, they actually got married over a copy of Mein Kampf. You can see them doing the Nazi salute.” In the show Francois is gleeful about the suffering and murder of Jewish children. “My friend watched the show and said, Francoise couldn’t be that evil.’ ‘No, she actually was.”