Women are more likely to marry men with strong handshakes, research suggests. Scientists discovered the firmer a man’s grip, the more likely he was to be married.

However, the same link was not present for women, according to the Columbia University researchers.

Grip strength has long been considered a measure of health, with stronger grips being linked to a lesser risk of heart disease and even death.

But the new study, which used data from more than 5,000 adults, was the first to show a link between grips and marriage. 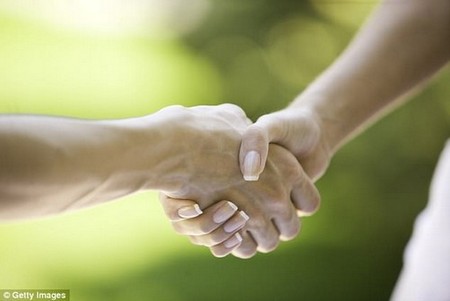 The firmer a man’s grip, the more likely he was to be married. However, the same link was not present for women, according to the Columbia University researchers

Study author Dr Vegard Skirbekk said: ‘Our results hint that women may be favouring partners who signal strength and vigour when they marry.’

He suggested this could be because women prefer healthier men, who won’t need to be cared for in old-age as much.

Dr Skirbekk warned more attention needs to be paid to me with weak grips, given the body of evidence that shows it could signal poor health.

And they won’t have an eagle-eyed partner looking out for them, which some studies have suggested could lead them to an early grave.

He described this as a ‘double burden’ and called for social policy intervention to help men with weak grips, including housing arrangements and counselling.

Participants in the study were asked to squeeze a vigorimeter – an instrument which measures grip  strength using a rubber balloon.

COULD A FIRM HANDSHAKE COULD GET YOU A JOB?

A study in 2008 looked at 98 undergraduates taking part in mock interviews with businesses.

As each was graded on their overall performance, five ‘handshake raters’ also marked them on their grip, strength, duration, vigour and eye contact.

Professor Greg Stewart, from the University of Iowa, who led the study, said those who scored highly with the handshake raters were also considered to be the most likely to be by the interviewers.

Students with ‘wimpy’ shakes were judged to be more timid and less impressive.

The study also found women with a firm handshake were likely to be evaluated more favourably than their male counterparts.

Grip strength was assessed when the participants were aged 59 to 71, according to the study published in the journal SSM-Population Health.

The findings, published in the journal SSM-Population Health, are thought to be a result of societal trends which have lessened the importance of marriage.

Other studies have found men with strong handshakes are less likely to suffer from erectile dysfunction and cope better on their own.

This effect is thought to be due to more blood being pumped around the body in individuals who have high hand strength.

While University College London research in 2010 found a weak grip can predict a greater risk of premature death.

And Manchester University scientists last week found there was some truth in the saying ‘healthy body, healthy mind’.

They found people with a stronger hand grip are better at problem-solving, memory tests and reasoning, and have faster reaction times.

Troops may have invisible brain injuries from weapons training