About a third of cancers could be prevented with lifestyle changes. You might have thought that by now most people would be aware of what the lifestyle risks are, but you’d be wrong.

Our latest study, published in the European Journal of Cancer, shows that many people are still confused about risk factors, despite vast sums being spent on public health education campaigns.

A sizeable minority of the public either fail to appreciate the significance of known risk factors or hold unfounded beliefs about possible causes, such as using mobile phones or being near overhead power lines.

Researchers at UCL and the University of Leeds asked 1,300 adults about what things cause cancers and what don’t. Pictured: their results in a graph 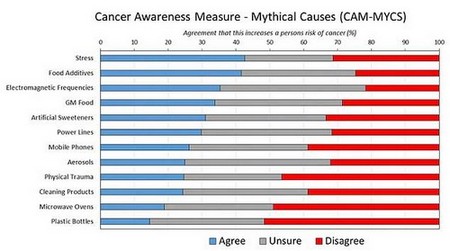 People need an accurate picture of cancer risks for them to make an informed decision about how they can protect their health.

The thrust of the public health strategy to reduce the cancer burden is to encourage people to avoid or minimise the risks they face. That is undermined if there is confusion over those risks.

Our study of 1,300 adults found high levels of misunderstanding about risk factors.

Using data collected from the Attitudes and Beliefs About Cancer UK Survey in 2016, we set out to investigate people’s understanding of the causes of cancer and to identify if certain groups were more likely to have an inaccurate picture of cancer risks.

The results of our analysis surprised us.

Overall, less than half of the questions people were asked about cancer risk factors were answered correctly. Some people had a good understanding of the established risks factors, but people with greater knowledge were also more likely to incorrectly endorse fictitious causes, such as electromagnetic frequencies and microwave ovens.

We could not investigate why that was happening, but it suggests a ‘hypersensitivity’ to risk factors: people were sensing dangers where they did not exist. This suggests people are failing to filter health messages that are being disseminated through their social networks and via media outlets.

Four out of ten respondents didn’t know that being overweight is linked with an increased risk of cancer.

Not only were some people not aware of the established risks, others held beliefs about the cancer causes not supported by science. Almost half the respondents thought stress was a factor and a quarter blamed mobile phones.

One in five believed that using a microwave oven was a risk factor. The research raises questions about the source of information for people.

In line with previous research, people who were white and had spent longer in education were more likely to identify the actual causes of cancer.

People who were younger and white were more likely to believe in unsubstantiated cancer risks.

The findings support existing evidence that specific population groups are more likely to have a poorer understanding of cancer risks. Targeting health messages so they are accessible and comprehensible to everyone in society is key to addressing communication inequalities.

This is important because science is developing an increasingly complex picture of the factors contributing to cancer.

As the field makes progress, it is unlikely public knowledge will always keep pace, leaving important messages about health promotion unattended to.

With people increasingly getting their news from social media – sometimes from unreliable sources (so-called ‘fake news’) – it will be crucial to monitor shifts in people’s beliefs about the causes of cancer and their lifestyle changes.

The results of our study can be used as a benchmark for public understanding of cancer risk factors against which future changes can be measured.

Foods to eat and skip if you want to get pregnant