Liz Harms was ashamed of her colon cancer. At only 34, she was a healthy nurse and new mother to her second child.

But what Liz thought were just the oddities and aftermath of pregnancy was in fact a tumor that had reach from her colon into her liver.

Liz endured much of her cancer treatment feeling alone and without patients her age to relate to, despite the fact that a growing number of young people are developing colon cancer.

So Liz built her own cancer community in her hometown of Denver, Colorado, and now, at 41, she has embraced advocacy over embarrassment of colon cancer.

Liz Harms (left) was diagnosed with colon cancer at 34 just after the birth of her youngest son (right). At first she thought her symptoms were after-effects of her pregnancy

During her pregnancy with her youngest son, food tasted a little funny, cramps would sometimes grip her upper stomach and, if she sat in just the right way, Liz’s upper abdomen looked a bit lumpy.

Then again, she had a human life growing in her belly. Pregnancy – Liz knew from carrying her older son – is a strange process full of hormonal shifts and bodily changes, she wrote in a piece for Women’s Health.

I’ll admit I wished I had breast rather than colon cancer. Breasts are sexy, while the organ that makes stool…not so much

She dismissed her symptoms for those nine months in 2011.

After her son’s birth, Liz was looking forward to a return to normalcy. But her first postpartum visit to her midwife revealed that Liz’s body was far from back to normal.

Liz’s red blood cell count was dangerously low, and her midwife sent her straight to the hospital for a blood transfusion.

But the doctors were skeptical; Liz’s red blood cell count seemed far too low to be just the aftermath of giving birth.

They sent her for a CT and ultrasounds, which revealed a mass in her colon.

One radiologist figured that it must be just a sign that her bowels hadn’t moved in awhile, but the position of the mass was all to familiar to Liz.

It was right where the lump that sometimes bulged under the skin of her abdomen was.

‘My doctor showed me pictures of my colon during the procedure; I was drugged up and out of it, but in the fuzzy recesses of my brain I knew something was wrong,’ she wrote for Women’s Health. 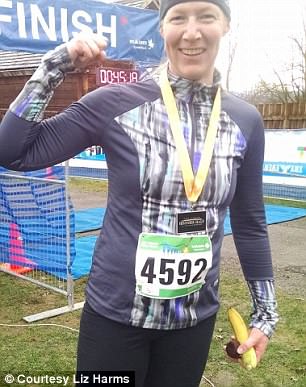 Colon cancer risk factors among include obesity and poor diet, but Liz had neither, and has even run competitively

Liz had stage 2 colon cancer that had made its way through the wall of her colon and latched onto her liver.

The next steps were a blur for Liz.

On the same day as her diagnosis, and only two days after the mass first appeared on her scans, Liz was rushed into surgery to remove the tumor, the part of her colon it had affected and a small portion of her liver.

For the next six months, Liz was stretched thin, recovering from surgery, going to chemo and radiation and looking after her newborn as well as a two year old son.

‘I was in survival mode the whole time,’ she wrote.

It was ‘good in a way because taking care of them absorbed all of my time and distracted me. It also made it easy for me to stay in denial for a while,’ she added.

When she went for treatments, Liz felt totally alone, even if she was in a room full of other patients.

Women are diagnosed with colon cancer, on average, at age 72 – more than double Liz’s age at the time her tumor was discovered.

When she went for treatments, she was often asked who she was there to visit. 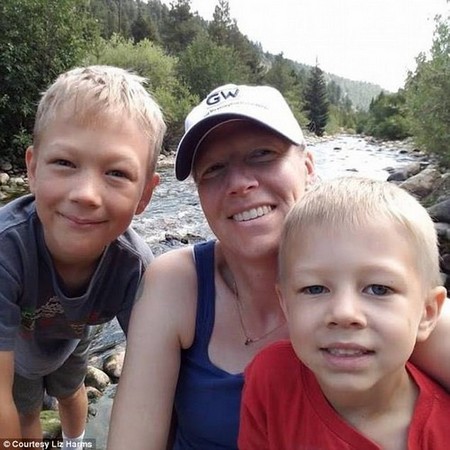 Just after the birth of her youngest son, Liz had to begin chemo and radiation to treat her colon cancer, all while raising a newborn and two-year-old

The hospital social worker told her there were no local support groups for young colorectal cancer patients and survivors.

In reality, colon cancer has been on the decline among older Americans, even as it rises sharply among younger people.

But the overall numbers are still small – only about one percent of the population.

Liz is married and had friends, family and co-workers around her that she could turn to, but that meant explaining her condition, which, she admits, embarrassed her.

At times, Liz wished she’d had another ‘sexier cancer’ with a better support network, but now she runs he own group in Denver

As a nurse, Liz deals with plenty of stool, but that’s not really the part of her job she usually talks about with her friends and family.

‘No one likes to talk about bathroom issues, and no one wants to tell their doctor, friends, or family that they have blood in their stool or that they’ve been having chronic diarrhea or constipation for weeks or months,’ she wrote.

If Liz did get bold enough enough to reveal her diagnosis, she often felt shamed or blamed for her own cancer.

Her age certainly didn’t explain her cancer, so, amid the early days of the gluten-free craze, everyone ‘assumed I got sick because of my diet. But when people asked if I was allergic to gluten, it was like finger nails on a chalkboard,’ she wrote.

Most experts have posited that colon cancer rates among young people are going up in line with rising rates of obesity and processed food consumption. But Liz was not obese, and had never had any other health problems.

She resented her cancer, and even compared it to other kinds.

‘I’ll admit I wished I had breast rather than colon cancer. Breasts are sexy, while the organ that makes stool…not so much.

‘I need a colon but I don’t need my breasts. And there’s so much more support for breast cancer survivors,’ she wrote.

Fed up and isolated, Liz decided to look outside Denver for a community of support that she wouldn’t have to explain herself to.

Liz could rely on the support of her husband (right) while she battled cancer, but talking to him just was not the same as speaking with other colon cancer patients

Liz has been in remission for seven years, and life with her husband and sons is mostly back to normal, though she says lives with cancer in the back of her mind

Liz attended the group’s conference in Las Vegas, and returned home to Denver, determined to build a local chapter.

Connecting with these fellow survivors has helped Liz, who has been in remission since November 2011 to come out of the shadows – and encourage all young people to be their own ‘self advocate.’

‘A big part of the problem is that young people often get misdiagnosed with other GI problems for months or years before doctors ever find a mass,’ she wrote.

And she advises to be persistent. If a doctor’s diagnosis and treatment for a GI issue doesn’t solve the problem, ‘keep going back to the doctor until you find the answer.’

More than anything, she wants others with cancer to know that they are not alone.

‘I never want anyone to go through the isolation I experienced when there are people out there who can help,’ Liz wrote.