Dr Brooke Vandermolen aka The OBGYN Mum adds:“Sterilisation certainly is still available as a procedure but I would agree that we’re not doing as many of them as we used to.

The first step would always be to try to encourage reversible forms of contraception rather than irreversible ones because people do change their mind and it’s difficult to then be in a position a few years later when they come back and say, ‘Can we do anything to reverse it?’ and we have to say, ‘No we can’t’. We also encourage male sterilisation as superior in terms of how affective it is compared to female sterilisation.”

When 34-year-old Louisa* spoke to her GP about getting sterilised during her second pregnancy, she too was asked whether or not her partner could get a vasectomy instead. But after suffering with hyperemesis gravidarum (HG) – a condition which causes excessive nausea and vomiting – throughout both of her pregnancies, and knowing that she only ever wanted two children, this was nowhere close to an adequate solution. 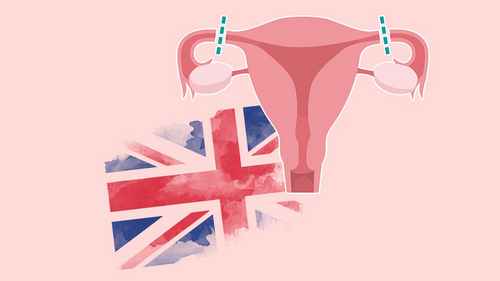 Despite pleading with multiple doctors at her GP, Louisa’s request for sterilisation has still not been approved on the basis that she’s too young and that she could change her mind in future. “At first they told me they don’t allow pregnant women to make the decision to get sterilised because of our hormones. It’s like they’re deciding my future and my family’s future, but they don’t know how I was feeling when I was pregnant. They didn’t feel the sickness that I was feeling, and I know that a third pregnancy for me would be really bad. So it’s horrible that they get to decide what you can and cannot do with your body.”

While mothers like Olivia and Louisa found their experiences frustrating, those younger and without children have an even harder time trying to convince doctors that they are certain they’ll never want children and that sterilisation is the only option they’ll accept. Journalist Holly Brockwell made headlines in 2016 when, after years of campaigning, she finally found a GP Specialist who agreed to carry out the procedure for her.

Offering some additional insight into why a woman may be denied sterilisation, Dr Sarah Gatiss, spokesperson for the Faculty of Sexual and Reproductive Healthcare which is a specialist society of the Royal College of Obstetricians and Gynaecologists, explains: “The decision with any treatment is a joint one between the patient and practitioner. Due to the risk of a woman changing her mind over time, and the availability of alternative and more effective safe methods of contraception, this can lead to clinician unwillingness to agree to a permanent, and difficult-to- reverse procedure.”

Though doctors’ hesitancy is likely the primary cause of the decline in women’s sterilisation in the UK, the figures previously highlighted from the 1980s illustrate that this is likely underpinned by a significant shift in societal attitudes towards the procedure, even for women who’ve already had children. Sterilisation is almost never discussed as a viable method of contraception for women and has almost become anonymised as a result.

On one end of the debate there’s a risk of oversimplifying the argument in defence of sterilisation, so it is important to acknowledge that some women do end up regretting the decision. According to private healthcare provider BMI Healthcare, 5-10% of women end up wanting to have their sterilisation reversed which isn’t an option on the NHS and which can cost in excess of £4,000 to get done privately with no guarantee of success.

It’s fair to say that the women’s sterilisation boom is far behind us, and the ongoing push for long- acting reversible contraceptives as an alternative option means it’s likely the number of those undergoing the procedure will continue to decline. Whether doctors and GPs start to become more receptive to women like Holly who are adamant that they never want kids, or like Olivia and Louisa who are already parents and feel like their families are complete, remains to be seen. But if today’s attitudes are anything to go by, it doesn’t look likely.

All of your Coronavirus-related questions, answered

Have trouble waking up in the morning, it could be ‘delayed sleep phase syndrome’