Mercury is going into retrograde next week, from 27 September up until 18 October. So, should we be worried?

As even those of us with the most basic understanding of astrology, horoscopes and moon cycles will know, Mercury retrograde period gets a pretty bad rep.

Mercury is considered to be the planet that governs the ways we think and communicate with one another – meaning that, when it retrogrades (or goes backwards) that can spell chaos with a capital C.

During this time, you might make mistakes, say the wrong thing or get your wires crossed with the people around you. It can be a highly inconvenient time for our professional lives, relationships and well, just about everything in between – throwing a spanner in the works of our everyday lives. 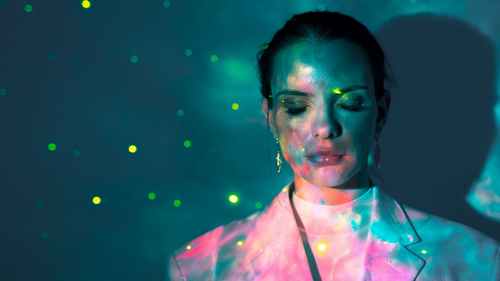 But it isn’t all bad. Apparently, there are consolations to be found in this disorientating time.

Don’t get us wrong, a state of disarray and chaos isn’t necessarily what we’re looking to invite into our lives, particularly after a pretty hairy 18 months of – well, no need to spell it out.

But, according to astrology experts, consciously embracing this time could be a positive: an opportunity to take a step back from decision-making in the here and now, and to make room for something else altogether.

Mercury retrograde can be a time for ‘reflection’ and gaining ‘perspective’ over our lives, according to Astrology.com. It might be a period that allows for deep internal reviews’, ultimately paving the way for our most ‘important work’.

We also know that chaos can happen at any time during our lives – not just when Mercury is in retrograde. So now might be the time to start setting up the safety nets to catch you when you stumble, whether that’s backing up your computer or phone or repairing old items.

‘This is an important time to give yourself extra time, go with the flow, and follow intuitive signs,’ she wrote in a recent post.

You might not be able to control everything, whether that’s how you come across to others, or how well your daily schedule runs.

But Mercury retrograde period might be a timely reminder that that’s all OK to stop doing for a while, and focus on being.

Worst comes to worst, you’ll know once and for all that the world won’t fall apart if you’re accidentally running late for an appointment, or if you choose to delay an important decision until your mind feels clearer.

And as for the inevitable difficulties? Remember – there’s a way around them, even if it’s just being a little kinder and slower with yourself.

Astrologer Kathryn Morgan @ziaku offers further guidance for this perplexing time, sharing a ‘Mercury retrograde survival guide’ on her Instagram page which offers practical tips for navigating the brain fog and external chaos. ‘Triple-check your emails/texts’ and ‘Leave earlier’ are just two of her helpful suggestions.

If all else fails, reminds yourself: this will all be over by mid-October, and order will be restored again.