There are logical reasons why dudes haven’t caught up. Men’s bodies aren’t as oppressed and ridiculed, so the need for fat liberation isn’t as dire, at least culturally. But personally, for me-as a living, breathing fat, gay male-yeah, I want to see diversity. Not just want: need.
I wore a swimsuit on two occasions this summer, and I felt weird both times. But maybe I wouldn’t have if Rihanna’s Savage X Fenty Vol. 2 show had aired sooner.

As a fat, fem gay man, I don’t have much in terms of representation. I’m not looking for sympathy: Being a plus-size man is much easier that being a plus-size woman. We can take up more space, and our bodies aren’t scrutinised the same way women’s are. But in terms of representation in the media and pop culture, women have us beat. The way media and fashion brands for women have embraced fat bodies over the years has given me so much joy and hope-I only wish men would catch up.

Instead, men’s magazines still offer tips for burning belly fat and rarely have covers starring fat or even chubby guys. (Unless you count this 2017 cover of James Corden, which includes an eating pun. Cringe.)

And Rihanna is here to show me. I already knew I’d see body representation for women in her Savage X Fenty Vol. 2 show-which aired on Prime Video October 2-but the male body diversity was a wonderful surprise. The trailer alone got me excited: Women and men of all sizes aren’t just existing here, but thriving. Dancer-influencer Dexter Mayfield, last seen in Taylor Swift’s “You Need to Calm Down” video, is up front and centre:

As is Lizzo, whose friends cheered on her segment during a viewing party she threw:

These models, too, are every damn thing. 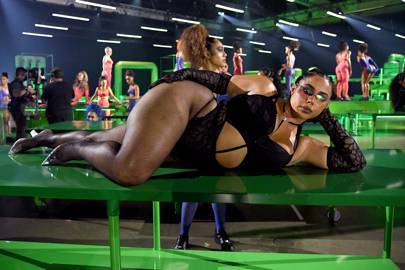 But what really floors me is Fenty’s E-commerce site, which features a plus-size man modeling boxers in size XXL. (The waist sizing goes up to 44–46 inches, which is great.) His body looks like mine, as opposed to the universally accepted “plus-size” male body, which means defined pecs and a rugby-ish build. I don’t want to put labels on this guy-but to see someone with stretch marks, a stomach, and pecs that aren’t “perfect” not just be represented but celebrated means more to me than I thought it would. 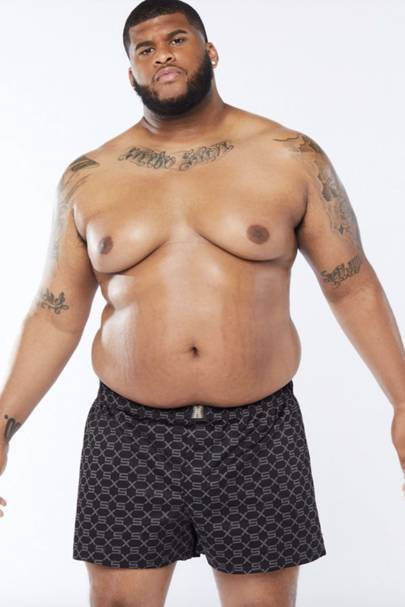 None of this should be groundbreaking. Fat people have existed in the world since the dawn of time. We have sex, we dance, we want to look cute in clothes and buy underwear that makes us feel good. Men and women both.

Even in my own life, I don’t treat my weight as this huge “thing.” I still go out, dance at clubs (pre-COVID), and make out with boys like any of my straight-size friends. But when I do those things, I constantly hear a nagging voice in the back of my mind, lying to me, saying I don’t deserve to live life so freely.

That in a fat, fem body, I need to fade into the background and be content just existing. I’ve done my best to fight that voice off alone, but it’s been hard. I didn’t realise just how much representation could help me in that battle until now. It sounds cheesy, but it’s true. 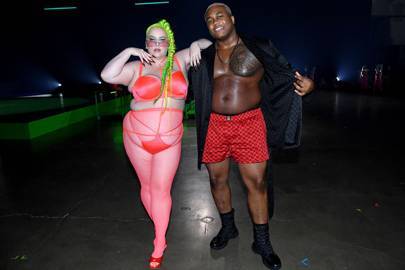 So thanks, RiRi. I’m going to put that swimsuit back on now (and, yup, buy your boxers).

19 Puffer Jackets So Cool, You’ll Want to Wear Them All