On 8 May, US President Donald Trump announced his decision to exit the Iran nuclear deal, hampering ongoing efforts to establish scientific collaborations between researchers in the two countries. Scientists say the move will make a bad situation worse.

Under the 2015 Joint Comprehensive Plan of Action (JCPOA), Iran agreed to scale back its nuclear programme and allow international inspections of its facilities in exchange for the removal of economic sanctions imposed by the United States, the European Union, Britain, Russia and China. At the time, many researchers saw the agreement as an opportunity to bolster Iranian science and to expand international collaborations.

But those plans have encountered roadblocks since the 2015 deal. For example, when Trump took office last year, longstanding efforts to establish scientific exchanges between Iran and the United States came to a halt.

And workshops organized by the US National Academies of Sciences, Engineering and Medicine (NAS) between 2010 and 2017 – meant to bolster collaborations in diverse fields including solar energy and water resource management – stopped after the Trump administration raised questions about Iran and the nuclear deal, says Glenn Schweitzer, who spearheaded the NAS work in Washington DC. 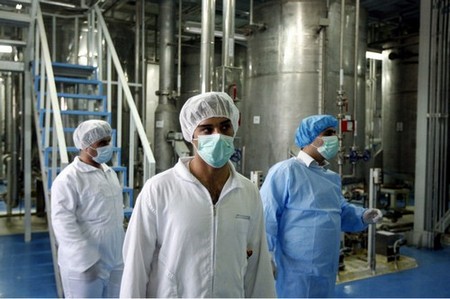 “We were all full of enthusiasm when the agreement was signed, but unfortunately things went in the opposite direction,” says Soroosh Sorooshian, an Iranian-American hydrologist at the University of California in Irvine. He was one of hundreds of scientist who participated in the NAS workshops. “God knows what happens next.”

Iranian scientists have expanded collaborations with their European counterparts in areas such as nuclear safety and security, but similar work has failed to take root in the United States. That is in part because some US sanctions remained in place in spite of the nuclear agreement, and US researchers often need a license from the Treasury Department in order to collaborate with government scientists in Iran, says Matthew Bunn, who studies nuclear nonproliferation issues at Harvard University in Cambridge, Massachusetts.

Bunn is seeking such a license in order to initiate a dialogue with top nuclear scientists in Iran, with the ultimate goal of steering the country toward a safe and secure nuclear energy programme. Trump’s decision could detract from efforts to advance meaningful scientific cooperation, Bunn says, in addition to emboldening Iranian hardliners who would like to see the country become a nuclear power. “I need to rethink what I had been planning,” he says. “There won’t be a lot of enthusiasm on the Iranian side for dialogues with Americans such as myself.”

Other research collaborations that could be in jeopardy include work at Fordow, an underground nuclear facility near Qom in northern Iran. As part of JCPOA, Iran agreed to halt uranium enrichment at the facility. The country planned to pursue particle physics research there, as well as use the facility to produce medical isotopes. Russian scientists had been working with Iran on experiments in order to advance their medical isotopes production, says Scott Kemp, who heads the Laboratory for Nuclear Security and Policy at the Massachusetts Institute of Technology in Cambridge.

“I think that work gets mothballed, at least at the outset,” Kemp says. And if the agreement collapses entirely and Iran walks away, he says the country would scrap the effort altogether “and go back to making enriched uranium”.