My personal practices are ‘eclectic’ with a mix of plant magic, herbalism, Celtic and Hindu rituals mostly and one bonus of being seconded to my flat in the pandemic has meant I’ve had more time to invest in it.

That looks like meeting digitally with my coven or making a batch of four thieves’ vinegar (based on the legend of 15th century thieves who stole from people during the plague without getting sick) through to using my own cleansing wands with protective herbs to (try) to instil calm in my now multi-functional space.

I’ve also instinctively incorporated elements of magick (some spell it differently to differentiate it from the performance and illusion of magicians) into my regular beauty and self-care routines too – in a way that I’ve really loved.

Like many, I discovered witchcraft through popular culture (hello, The Craft, Practical Magic and 90s metal.) But it wasn’t a passing phase. And though I’ve dipped in and out my entire life, witchcraft in some form has been a part of my spiritual routine for almost two decades now. 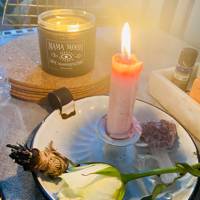 Pre-pandemic I’d do my makeup anywhere with a flat-ish surface (dining tables, my lap…Pret A Manger) but now – as I wear it less frequently – its application has become a treat. I sit at my dressing table which has almost become a tiny altar in itself, covered in beautiful perfume bottles and vintage glassware.

The makeup I use tends to be ultra-decorative too – a weighty gold lipstick almost feels akin to holding an ‘athame’ or ritual knife and I often decant anything that’s safe to do so into sanitised antique pots or perfume atomisers. I also tend to favour brands that have certain smells like herbs, rose or honey – many of which are used in spells and rituals. And my two makeup staples are a red lipstick (the ultimate non-conformist shade) and dark eyeliner in part homage to my Hindu heritage and protection from the evil eye. 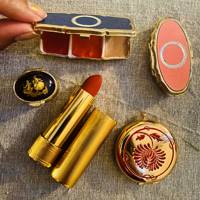 We’re much more appreciative of the power of human touch via massage, the buoying conversations with our hairstylists or the camaraderie of a nail salon now that it isn’t as available to us. But I’ve tried to invoke that sense of joy wherever I can in my beauty routine through using home-made oils for bath spells (they also work for anointing candles in rituals), through to using those same blends to make own home-made air freshener – a bit like an esoteric Febreeze.

When I journal and do Vedic (mantra) meditation each morning, I use specific candles or oils that resonate with me for a reason – everything is thought about, nothing is hurried, and everything connects on a deeper level of intention.

I always find it telling that the word ‘glamour’ itself was (loosely) derived from literature about magic, because that is how it has always felt to me, as a vehicle for self-connection and deep expression (the Wiccan mantra of ‘as above, so below’ really resonates here too.) So much witch-related beauty seems to revolve around ‘unleashing your inner Stevie Nicks’ complete with fringed robe and floaty dress (unpopular opinion: Fleetwood Mac are overrated), but in reality, there’s much more to it than the ephemera.

The current trend for commodifying witchcraft and esoterica (see the starter ‘witch kits sold briefly by Sephora as prime example) also sits uneasily with me, because Wicca itself is a religion and because people – mostly women – were and still are routinely persecuted through to ongoing witch-hunts across the globe. 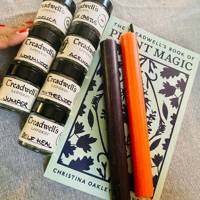 Whilst those kits were rightfully pulled from stores, I don’t think a ‘witch kit’ really makes sense anyway; witchcraft for me is about expressing individuality, connecting to your deepest self and part of that joy is sourcing those items that truly align with who we are. And beauty is an excellent way to do that. So, here’s just a few of the things that embody that for me…

What women *really* want to know about sex