Harry Styles is bringing us yet more, erm, pleasure with a much-awaited reveal as to what his 2019 hit single Watermelon Sugar is really about.

During a Nashville date on his world tour – which has been filled with off-piste ad libbing while he isn’t singing, including some iconic lines of dating advice and a surprise gender reveal for an expecting mum in the audience – he cheekily confirmed what we always suspected.

“It doesn’t really matter what it’s about,” he said as the intro to the track began. “It’s about the sweetness of life.” He then leaned into his teasing reveal: “It’s also about the female orgasm – but that’s totally different, it’s not really relevant.”

We would argue it most certainly IS. After all, according to recent research by sexual wellness brand LELO, 4% of women say they have never orgasmed with a sexual partner and men were found to be 20% more likely than women to orgasm during sex. 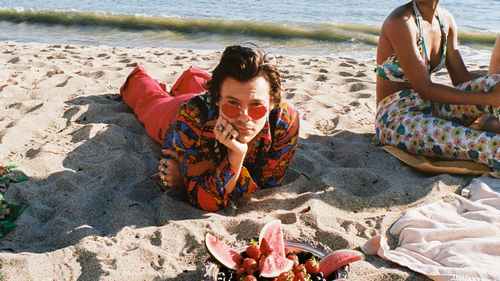 So we thank Mr Styles for bringing attention to this important issue. There has been much discussion about the meaning behind certain lyrics on the track (Tastes like strawberries / On a summer evenin’ / And it sounds just like a song), with Urban Dictionary also listing “watermelon sugar” as a phrase used to refer to illegal drugs.

During an interview with Zane Lowe after the release of the track and his album Fine Line, Harry coyly sidestepped the question when the DJ asked if Watermelon Sugar was written about oral sexual pleasure. Now, we finally know.

Harry’s announcement of dating advice caused a similar uproar, when he reacted to a fan holding a sign “Should I text him?”.

After outlining the very familiar and relatable trials and tribulations of modern dating, including the agony many of us feel about how, when and what to text a person we fancy, the singer dispensed some sage advice as to what it means if you feel like you have to play games.

“My personal opinion is that if there’s any sort of games, trash, trash, trash, not for you,” he said to tumultuous applause and a huge freak out on social media, due to the line being plucked straight from romantic classic The Notebook.

We’d like to thank Harry Styles once again for standing for non-toxic dating and the female orgasm. We salute you.