In the last episode, Emily and Gabriel get cosy after he sacks off his girlfriend, Camille (Camille Razat) as he’s heading to Normandy to open his own restaurant. That is until his plans change and he’s set to stay in Paris after all.

Oh, but then Camilla discovers this and wants to get back with her old beau. She texts Emily, ‘Can we talk?’ and that, of course, was our cliffhanger ending. So, where can it go from here? Will Emily in Paris Season 2 pick up from where it left off?

In an interview with OprahMag.com , show creator Darren Star said: “In season 2, she’s going to be more of a part of the fabric of the world she’s living in. She’ll be more of a resident of the city,” adding, “She’ll have her feet on the ground a little more. She’s making a life there.”

Lily, who is also a producer on the series, recently shared her hopes for a next season. During an interview with Vanity Fair , she said: “I would love nothing more than to be able to go back to Paris and do [a new season].” She added, “There were so many situations that we were like, ‘Okay, write that down. That’s going to happen in season two.”’ 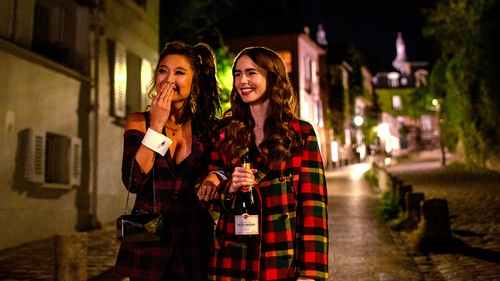 Star also told VF that “I’d like to explore so much more of the supporting cast, like Philippine Leroy-Beaulieu, who plays Emily’s boss [Sylvie]. I think we’ve just scratched the surface of who she is and what makes her tick.”

Who is in the cast for Emily in Paris season 2?

We know that the main cast in season 1 will return for season 2. Darren Star said during an interview with Oprah magazine last year that Lily Collins, Lucas Bravo, Camille Razat and Ashley Park will all be back, as will the Savoir employees Philippin Leroy-Beaulieu, Samuel Arnold and Bruna Gouery.

We can also expect to see Lucien Laviscount, whose previously starred in Scream Queens and, errr, Waterloo Road? We didn’t see that one coming. According to TV Line, Lucien will play Alfie: “a sarcastic and charming cynic who refuses to speak French or immerse himself in French culture.” Perhaps Emily can give him a few vocab lessons?

We could even see a cameo appearance from Carrie Bradshaw in Emily In Paris season 2, after Variety suggested it and Lily replied, “I would love that. I feel like maybe that needs to happen. I might tell Darren about that. She could be like an apparition. Emily walks by, and there’s a reflection in a window, and she looks in, but she sees Carrie. Then it goes back and it’s her, and she’s like, ‘What?’ I think that’d be kind of great.”

When will filming for Emily in Paris season 2 begin?

Season 2 has just finished filming, so we’re hoping the show will be back on our screens by the end of the year.

Is there a trailer for Emily in Paris season 2?

As filming has only just wrapped, all we have so far is a video from the cast stating their excitement to resume filming. Hopefully, we can expect a trailer very soon…

What’s the release date for Emily in Paris season 2?

With production taking place this spring and summer, it’s likely we’ll have to wait until the end of 2021 or even into 2022 for Emily in Paris season 2 to drop on Netflix. Watch this space!