People infected with a virus often harbour very low numbers of circulating viral particles, making the infection difficult to detect. For example, during one outbreak involving Zika virus, infected individuals harboured as little as one virus copy per microlitre of blood serum.

These small numbers pose a large problem for medical diagnostics. However, researchers might in the future be armed with molecular tools whose sensitivity has been refined by evolution. Writing in Science, three groups– report a new class of diagnostic tool, created by repurposing nucleic-acid sensing systems found in bacteria.

CRISPR–Cas systems are adaptive immune systems that protect bacteria from viral attack by functioning as nucleic-acid sensors. Nucleic-acid sequences from viruses that have previously invaded a bacterium are stored in the cell’s genome, and are used by Cas enzymes as a guide with which to recognize and bind to the same sequence if the virus invades again. Incoming viral nucleic acids are then cleaved through sequence-specific interactions.

One particular CRISPR system, derived from the bacterium Streptococcus pyogenes, has been adapted for use as a genome-editing tool that is revolutionizing biomedical research. However, there are many other types of CRISPR system, each of which has specific characteristics. The three current studies use CRISPR systems that have an unusual property: after engaging a target nucleic acid, they cleave other nearby nucleic acids indiscriminately, a process called collateral activity. The studies use this activity as a signal amplifier, whereby the cutting of many arbitrary nucleic acids serves as a beacon for the detection of one specific molecule.

In the first of the current papers, Chen et al. examined a type V CRISPR system that uses Cas12a proteins to target viral DNA. The authors discovered that Cas12a has collateral activity, indiscriminately cleaving single-stranded (ss) DNA after binding to its specific double-stranded (ds) DNA target. The researchers took advantage of this property to create a diagnostic tool for detecting viruses.

In the authors’ diagnostic, Cas12a guide sequences are designed to match particular targets in the viral DNA. After binding a viral target, Cas12a cleaves a ‘reporter’ construct – an ssDNA that is tagged at one end with a fluorophore molecule and at the other with a quencher molecule. Before cleavage, the fluorescence emitted by the fluorophore is captured by the quencher. However, after the ssDNA has been cleaved by Cas12a, fluorescence can be readily detected (Fig. 1a). Chen and colleagues boosted this fluorescent signal using a process called recombinase polymerase amplification (RPA) to amplify the target viral DNA, generating many more copies of the target sequence than are present in the original sample. 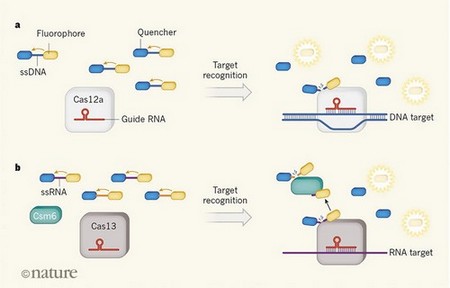 Figure 1 | Repurposing CRISPR–Cas to produce virus sensors. a, Chen et al. have developed a virus sensor called DETECTR, which has three parts: a Cas12a enzyme; an RNA sequence designed to guide Cas12a to a matching DNA sequence in a virus of interest; and a single-stranded (ss) DNA construct tagged with ‘fluorophore’ and ‘quencher’ molecules. In the absence of the target virus sequence, Cas12a is inactive and emission produced by the fluorophore is captured by the quencher (yellow arrow), preventing fluorescence. When Cas12a recognizes its target, it cleaves the ssDNA construct, separating the quencher from the fluorophore to generate fluorescence. b, Gootenberg et al. and Myhrvold et al. developed tools based on a system called SHERLOCK that is similar to DETECTR. SHERLOCK uses Cas13, which targets viral RNA and cleaves ssRNA constructs. Gootenberg et al. designed two ssRNA constructs, one cleaved by Cas13 and one by another Cas enzyme, Csm6. Csm6 is activated by Cas13 cleavage products, and serves to amplify the fluorescent signal and improve the reaction kinetics.

The group’s system, which they name DETECTR (DNA endonuclease targeted CRISPR trans reporter), can detect target DNA at extremely low concentrations – as little as one molecule per microlitre of sample analysed. The authors also showed that DETECTR could discern different strains of human papillomavirus in crude DNA extracts from patient samples.

In the second paper, Gootenberg et al. expanded on previous work– to create a diagnostic called SHERLOCKv2 (specific high sensitivity enzymatic reporter unlocking version 2). The original version of SHERLOCK works similarly to DETECTR, but uses Cas13, which binds to and indiscriminately cleaves RNA, rather than DNA. SHERLOCK is not limited to RNA detection, however – a transcription step can be included in the RPA process to produce RNA from viral DNA, enabling DNA detection by proxy.

Gootenberg and colleagues improved SHERLOCK in several ways. First, they screened 17 Cas13 family members and thoroughly characterized their activity. The authors discovered that a subset of Cas13 variants target mutually exclusive sequences. By using four such Cas13 proteins and designing a specific reporter for each, the authors created a SHERLOCKv2 system that could detect up to four viruses at once. Furthermore, by scaling up the RPA step, the group detected viral DNA sequences at concentrations as low as two copies per millilitre of sample.

The researchers also discovered that Cas13 cleavage products can activate another Cas protein, Csm6. By including a second ssRNA construct that could be cleaved by activated Csm6 (Fig. 1b), the group boosted the signal relative to background and improved the kinetics of the SHERLOCKv2 reaction. Finally, the authors combined all of these advances into a simple assay in which a drop of sample is applied to a strip of paper that holds the diagnostic, and a colorimetric readout is given. This format requires no instruments, greatly increasing the ease with which the technology can be used by scientists and clinicians in regions of high need.

The techniques developed by Chen et al. and Gootenberg et al. both require stringent purification steps to prevent viral degradation by the body’s RNA-digesting enzymes during testing. In the third paper, Myhrvold et al. paired the previously reported version of SHERLOCK with a method for inactivating these enzymes in body fluids, allowing the authors to directly detect viruses in urine and saliva. Their approach can be used to discriminate between related viral species, which can be difficult to tell apart because they cause similar symptoms.

Viral genomes can mutate rapidly, but Myhrvold and colleagues showed that they could use their system to discriminate between sequences that differed by a single nucleotide mutation. This enabled them to identify strains of Zika virus isolated from different geographic regions, as well as a Zika virus harbouring a mutation associated with a developmental condition called microcephaly. They showed that appropriate guide sequences can be designed in less than a week, and the whole protocol implemented in less than two hours, with minimal equipment and sample processing.

The diagnostic tools described in the current papers are a major advance for the tracking and treatment of viral outbreaks. But they could also have diverse applications beyond viral detection, such as identifying tumour-specific cancer mutations for personalized medicine, and enhancing quality control in agriculture and biomanufacturing by detecting possible biological contaminants. Although their long-term shelf-life remains to be tested, the tools excel in all other ASSURED criteria set by the World Health Organization for point-of-care devices, and are ready for deployment. The impact and adoption of these technologies will be determined by factors such as regulatory approval, scaling up synthesis for mass production, distribution logistics and economics.

Much of the excitement about CRISPR technology has centred on its use in gene or cell therapies, which are expensive processes that, for the foreseeable future, will probably be available only in prosperous regions of the world. The current studies greatly expand and diversify the possible beneficiaries of CRISPR technology, by developing a low-cost technique that has many important potential uses. 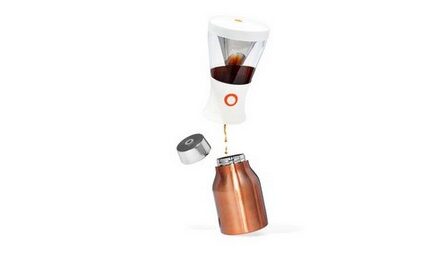 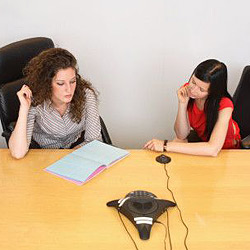