In a modern-day ‘selective’ patriarchal society it is not surprising that many are threatened by women who embrace things that are seen as negative and make it positive.

Cardi B and Meg Thee Stallion have both been vocal about wanting to create a balance on the double standard on how only men are allowed to be outspoken about their vulgar lifestyles and brassy behaviour in music. In fact, this new urban music culture has very much been driven by it. It appears that the more explicit the content is, the more attention-grabbing and alluring it becomes, and consequently the more money it makes. It’s a numbers game.

While some believe that the urban music scene is over-sexualising an entire generation in a climate where, of all conversations that should be taking place, this shouldn’t be one of them, others disagree. For some historical background, female musicians have been making raunchy music content since Kodak film was solely in black and white: insert 30’s blues singer, Lucille Bolgan.

Like it or not, Cardi B and Megan Thee Stallion are officially the poster girls for owning your sexuality, commercialising it and making it a trend. As viewers clutch their pearls like it’s 1985 while watching and listening to their latest collaboration, WAP, this brought to the forefront discourse on how we can make this style of art a conversation.

Now granted, in those times, being so open about your sensuality was quite taboo and frowned upon, you most certainly wouldn’t be having these conversations so publicly. The fan bases for both artists otherwise known as Bardi Gang and the Hotties tirelessly defend this Hot Girl/City Girl movement. They are quick to express that it is simply entertainment 101, where in a world where women are made to be ashamed of their bodies and their sexuality, it is refreshing to see women also taking control of the narrative surrounding their image and doing it in a fun way.

Although Cardi B is likely to be seen on Instagram wearing sexy clothing, the mother-of-one is also known for having loud and liberal political views. She often uses her huge platform to bring awareness to the injustices and bias within the political system for the working class and for the Black community. Her platform is used as a playground of her brand and her image, but no one can deny the impact she has had in the culture in terms of driving political conversations in a space where Black Women haven’t always had the opportunity or resources to be welcomed in.

Meg The Stallion has come up in the scene with her suggestive lyrics and clever punchlines, and that brought some real buzz in the underground music scene. On the same note, the Savage rapper and new ambassador for Revlon is currently pursuing a degree in health administration and is a true advocate in young women using their intelligence as a means to propel their careers.

She is a big supporter of the power of women getting their education and focusing on bettering themselves, where their ticket to success is not on their bodies, but instead on their talent. “Although school it’s not for everyone, do not let people discourage you from pursuing a higher education,” says the Houston native on Twitter. Of course, that is not to say that they can’t have fun and be themselves. After all, being sexy and smart are not mutually exclusive concepts.

It is of course arguable that there is a way to push this agenda on liberation and empowerment tastefully and we can probably recognise how some, openly express their dismay on how that is done. Some believe that perhaps, this should be done in a more palatable way for the mainstream audience, in a way that can easily be digested by all demographics.

For the most part the discourse comes from the method used by the women to empower themselves. There are so many rules and regulations and ways of how people should abolish their oppression/oppressor, and doing sexy music videos while spitting explicit lyrics hasn’t always been accepted as one.

Regardless of your stance, we cannot take away what these really powerful women are doing to push the feminism principles forward and normalising a women’s body and everything that comes with it. After all, the goal is for everyone to be able to celebrate themselves, and as long as their choices cause no harm, this method will always serve as food for thought.

Geraldine Viswanathan who is ripping up the romantic comedy rulebook 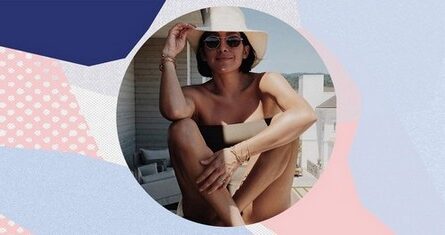 Bella Hadid on the surprising way she spends her downtime, why Gigi is an ‘angel’ and plans to break Hollywood