The damage to the Leilani Estates neighborhood is ongoing, and as of the morning of May 7, 35 structures (including at least 26 homes) have been destroyed, according to CNN.

Residents first spotted cracks forming in some roads on May 2, and by May 4, the volcano’s cracks began to release steam, ultimately bursting with lava after the giant earthquake hit. The county ordered more than 1,500 residents to evacuate.

“We have heard from people around the world concerned about Hawaii’s welfare and want to reassure everyone that this is limited to a remote region on the slopes of Kilauea volcano,” Hawaii Governor David Ige said in a statement. “Everywhere else in the Hawaiian Islands is not affected.” 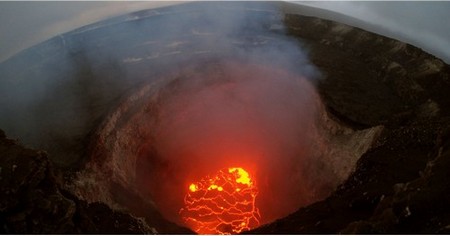 But scientists predict there could be more eruptions and earthquakes “perhaps for months to come,” so the effects are far from over. The massive earthquake is the biggest one to hit Big Island since 1975, and Kilauea is one of the world’s most active volcanoes.

Leilani Estates residents are flocking to American Red Cross shelters and finding safe ground as lava flows and smoke billows through their neighborhood. Take a look at 20 images from the natural disaster that show just how surreal it is.

Victoria Beckham Has Something Trailing Down Her Skirt – and It’s No Stain, Spill, or Wrinkle