But after spending the last month immersing myself in an intensive HIIT workout program while simultaneously retraining for a marathon, I found that I was more tense than I’d ever been. I’m not surprised my body was feeling a bit ragged, but I didn’t expect my mind to be so scattered juggling workouts and work.

I wouldn’t exactly say I’m the yoga type. Sure, I love a good yoga pant as much as the next person. But when it comes to inhaling and exhaling on cue, that hasn’t necessarily been my strong suit. Although I’ve accompanied friends to yoga classes in the past, I never really felt “connected” to the practice in the way I imagine I’m supposed to. I often find myself thinking of what I want for lunch or praying I don’t fall out of Tree pose and hit the person next to me.

On a whim, I signed up for free streaming yoga classes after a friend was telling me on a Zoom coffee date that she’s been turning to yoga during her time at home. She sounded so calm, at ease, and, dare I say it, zen. After we hung up, I signed up for my first yoga class. I can’t say it was pretty, and my Warrior Two was far from smooth, but by the end of the first 45 minutes, I felt different. Certainly, I was more stretched out from the week’s worth of training, but I was also refocused and energized to work my body more. 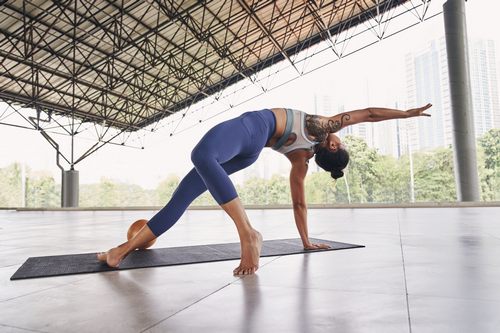 Since then, I’ve been incorporating a weekly yoga practice and a bit of daily mindfulness (inhales, exhales, and all!) into my training routine. Not only has the act of slowing down my body helped with improving my flexibility and strength – don’t let anyone tell you that a Chaturanga isn’t a fancy push-up – but it’s also helped me learn to let go of some of the stresses that can come with training. There’s a lot of worry and anxiety that comes with challenging the body, whether that’s in the form of chasing down a PR, competing in a fitness challenge, or simply finding the time to work out. But yoga has helped me realize that the activity isn’t about the stresses that come with it but rather the act of simply doing it.

Now that I’ve incorporated a more mindful and intentional activity such as yoga into my daily routine for almost three weeks, I’ve found a balance between the emotional and physical sides of working out. Now, I feel better equipped to handle a bad run, because I know I still put in the work. If I’m dreading a 7 a.m. HIIT class I swore was a good idea at the time, I simply tack on a yoga flow postclass to ensure I end the workout and start my day in a calmer, centered state. While I’m still working on Tree pose, I’m freer now to fall in and out of positions without judgment. And sure, I may still think of sandwiches from time to time when I inhale and exhale, but my practice has reconnected my mind to my body. Training isn’t so stressful anymore, it’s actually relaxing.

Plus, I can’t say I mind the excuse to indulge in some new yoga pants like the UA Favorite Graphic Leggings ($35) at all.

Even Simon Cowell Fanboyed Over This Singer