Yosef had been very vocal about his opinions during the first three episodes and, after learning about the game of strip dodgeball that Clare had the men play, he was done with the entire situation.

He told his fellow contestants how he felt the move was classes, and it lacked a maturity that he expected from Clare, a feeling that he’s had since the first time Clare called out the men for being hesitant about trying to gain her attention. When it came time for a cocktail hour before the rose ceremony, Yosef sat down with Clare to explain his point of view but quickly became the aggressor in a very heated confrontation.

“I feel like a lot of these guys, they’re appeasing you. If I had been on that date, I sure as hell wouldn’t have crossed that line,” he told the 39-year-old hairstylist. “Not in a million years would I be caught dead doing that, all right? I was so appalled. A completely classless display. I expected a lot more from the oldest Bachelorette that’s ever been. I can’t believe that actually occurred. That’s not the type of example I want to set for my daughter. You’re not setting the right example for my daughter.”

Season 16 of The Bachelorette has already provided Bachelor Nation with plenty of drama. We were anticipating shenanigans, thanks to the reports of Clare Crawley dropping out a mere 12 days into filming and Tayshia Adams stepping in to replace her as the lead, but one moment has stood out from the rest. Before the show, all we had were teasers hinting at the blowup between Yosef and Clare, but when it finally went down, it was so much worse than we anticipated! 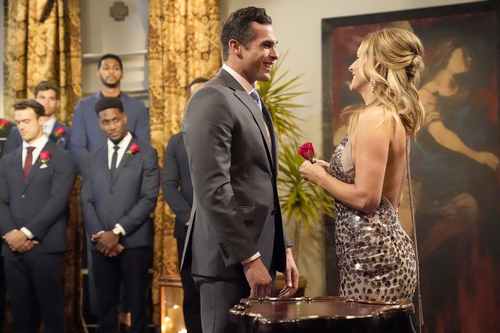 “I’m ashamed to be associated with you,” he added. “I can’t believe I sacrificed so much to be here, just to watch this distasteful and classless display. I’m serious, so appalled.”

Obviously, that’s not the best way to tell someone anything. The conversation quickly became a steaming pile of fiery trash as Yosef continued to cut Clare off when she attempted to speak, forcing her to end their talk. “You are done,” she told the 30-year-old medical-device salesman from Daphne, Alabama. “Do not ever talk to me like that. Never in a million years, did I think I would have to utter these words again. I never thought I would have to tell any man that I would never want them to be the father of my child, and I stand by that. I would never want my children having a father like you. Get out of here.”

Which was when Yosef fired back that Clare was “not fit to be a mother to my child,” and gave the infamous parting shot as he walked away: “I expected way more from the oldest Bachelorette in history!”

Clare, visibly upset, then said her infamous line: “I don’t care what I’ve done. To sit there and say, ‘You’re the oldest Bachelorette’ guess what? I’m the oldest Bachelorette that’s 39, that’s standing here, that’s single because I didn’t settle for men like that!” Go ahead, girl, speak your truth! And we all know that age is nothing but a number (when we’re talking about consenting adults).

Interestingly, Yosef was so concerned about Clare setting the right example for his daughter but didn’t think about how it would look for him to verbally harass a woman on TV. Glass houses, my friends. Unsurprisingly, Yosef did not return for the rose ceremony that night and was one of the several men Clare sent home. Here’s betting he doesn’t show up for Bachelor in Paradise!