Evoking the feeling of a grimy, punky nightclub at 10 a.m. on a bright Sunday morning isnt easy, but it turns out a pair of patent leather chaps can go a long way toward transforming the vibe of a space.

Presented against a video of teens moshing while Vince Staples and Yugen Blakroks booming track from the “Black Panther” soundtrack, “Opps,” played overhead, Israeli designer Alon Livnés tough, S&M-friendly Fall 2018 collection, chaps and all, was an audacious start to Tel Aviv Fashion Week. It also demonstrated why he is a breakout talent from the citys fashion scene deserving of a showcase slot on the calendar.

Inspired by a pool of references that includes Tom of Finland fetish gear, David Bowie and early 90s dance music — “Pump Up the Jam times,” Livné called it backstage — the collection this season was based heavily in leather, accented with sequins, suede and ample decorative piercings on both the clothing and the models. Many of the pieces — tops, coats and dresses, among them — featured strategically placed cut-outs of clear plastic. Others, fully made from clear plastic, were worn with strategically placed pasties. Sunday morning may mark the beginning of the work week in Israel, but Livné was here to party.

“I think that collection very much speaks to now,” says Mobolaji Dawodu, a New York-based stylist who attended the show. “Its very New York at the moment, in my opinion.” 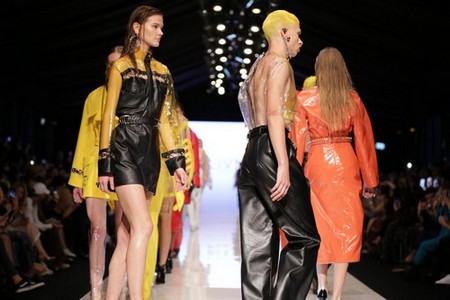 The Big Apple flavor is no coincidence. Livné, winner of the first Israeli edition of Project Runway back in 2009, recently opened a studio in Soho in Manhattan. He describes the collection as a collaboration between his New York office and his homebase in Tel Aviv.

Livné is not exactly new to the city; hes shown during New York Fashion Week and presents his (pastie-free) bridal collection, Livné White, there, as well. Still, setting up shop in Manhattan provides him with something of a fresh start. “Tel Aviv is really, really small,” Livné says. “I know all the journalists, I know all of the editors. In New York, I just started, so Im still building myself and my name.” 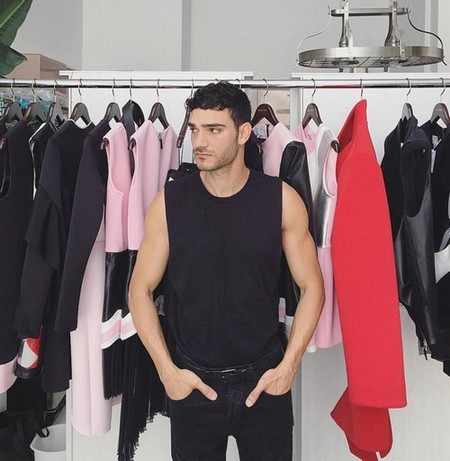 The move also represents a problem faced by smaller fashion communities around the world. When a designer like Livné — with legions of fans and clothes worn by Beyoncé, Naomi Campbell, Kim Kardashian and Lady Gaga — reaches a certain level of growth, decamping to New York, Paris, Milan or London, places that ostensibly offer greater infrastructure for independent brands to build their business and reach a larger customer base, feels inevitable. An established, well-organized Fashion Week in smaller cities, corporate sponsors and all, is one way to keep them coming back to where they began.

In Livnés case, a personal invitation from Tel Aviv Fashion Week founder Motty Reif to open the week with his show probably helped, too. “Its amazing for me to go back home and show my collection to all my friends and my colleagues and my family,” Livné says. “Its really fun to show somewhere where everyone knows you and appreciates you and knows your past.”

An overarching theme of Tel Aviv Fashion Week this season was inclusivity. Showing here allowed Livné to take part in that conversation with his collection, as well. “Its about everyone loving themselves, no matter if youre tall, short, fat, gay, transexual,” he says. “I chose to take this gender theme and to show that its okay to wear feminine outfits if youre a guy, to wear super-masculine, oversize outfits if youre a girl.”

Many of the models were Livnés local friends; he says he often goes out at night with a trio of male models with neon hair who walked in the show, some in towering heels. “Tel Aviv is a really, really, really open-minded city,” he says. “People from the U.S. think, Oh, Tel Aviv, you need to be careful, because its scary. But, its so much fun here, especially the nightlife. And the gay life is amazing here.”

Reflecting the openness of his hometown was his primary goal. Livné stresses the clothing he showed this season is not meant to actually be worn on the street, unless, he says, youre Rihanna. “You can take some pieces like the pants or jacket and blouse and mix them together, but most of my shows are really focused on the style and the energy,” he adds, noting he has a commercial collection he sells separately, in addition to his bridal line.

There was no shortage of energy at the show on Sunday. The reaction from the crowd gathered included spontaneous mid-show applause, a few audible gasps and at least one older woman who shimmied emphatically in her seat for the duration of the presentation. The palpable excitement suggests that, no matter where his upward trajectory takes him, Livné has an audience in Tel Aviv ready to party alongside him whenever he swings back through town. 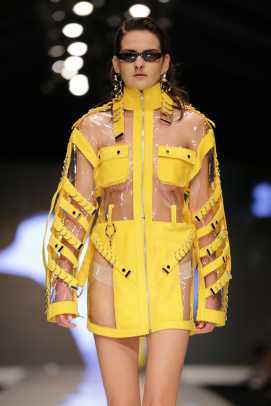 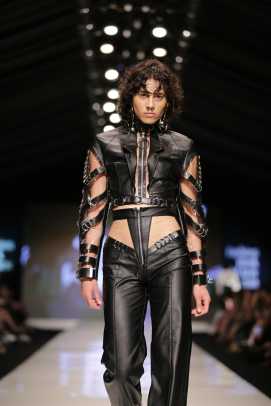 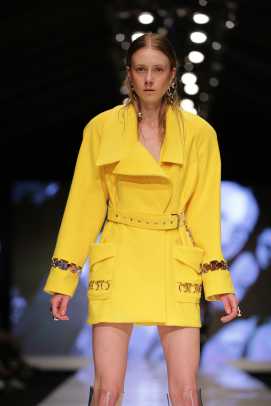 Want the latest fashion industry news first? Sign up for our daily newsletter. 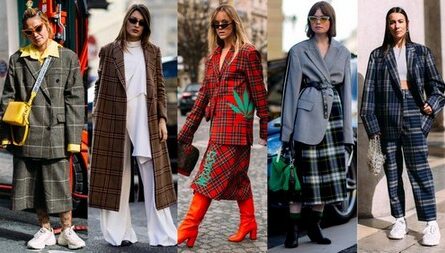