For nearly 40 weeks the seven teams competing in the Volvo Ocean Race live, eat, and work aboard one of the most technical boats in existence: The Volvo Ocean 65, a high-performance 72-foot carbon fiber vessel equipped to handle the toughest conditions on the planet.

Sleeping bunks in the dark and cramped underbelly below are spare stretches of mesh and aluminum equipped with seat belts; the toilet is off the back of the boat, right next to the plastic bin of Wet Wipes labeled “Sh*t Tickets!!!” It’s not a life of Topsiders and gin and tonics, that’s for sure.

But no one becomes an offshore sailor in search of comfort. The Volvo Ocean Race is one of professional sailing’s most elite, and most extreme, events, not for the faint of heart, or stomach. Starting from Alicante, Spain, in October and ending next month in The Hague, the boats cover 45,000 fast and wet nautical miles with brief stopovers to recover and refuel in 12 cities including Lisbon, Cape Town, Hong Kong, and Newport, Rhode Island.

That’s where I had a chance to sail with Turn the Tide on Plastic, a team of five men and five women skippered by Britain’s Dee Caffari, a former teacher now known for being the first woman to sail non-stop around the world in both directions, by herself. Her first words of advice to me as I climbed aboard: “Go where I go. But let me go first.”

During a practice race through Newport Harbor, the Netherlands’s Team Brunel takes the lead. 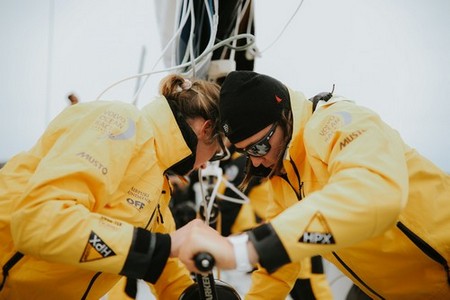 Built by Annapolis-based Farr Yacht Design and introduced as the standard for all teams in the 2014-2015 race, the Volvo Ocean 65 was designed for consistency and speed, with twin wheels, a longer and lighter keel, eight bulkheads compared to the previous average of four, and a reverse bow. The boat is meant to withstand 40-foot waves, 60 mph winds, and whatever else an earth moved by climate change can throw at a person. Which throughout this particular race, says Caffari, has been a lot: active monsoons, thunderstorms, and cyclones, not to mention nearly 8,000 nautical miles of inhospitable Southern Ocean, the waters circling Antarctica.

The writer learns the first rule of professional sailing: There are no good hair days.

Besides the unpredictability of nature, of course, there’s the unpredictability of everyday life on a houseboat that’s far more boat than house. Ocean sailing is a beautiful way to see the world, for sure – traveling under skies few others will ever see – but immensely stressful. Between legs, the boat does not stop. Your crewmates are sweaty and salty and by the end of a 10 to 21-day run at sea pretty smelly. They will get on your nerves. “In a normal professional sports team people get to go home or to their hotel room and have a shower, have a bit of time to regroup,” says American sailor Sally Barkow, one of four female crew members on Team Brunel.

“On this type of team you don’t have that opportunity. You have to be able to manage yourself, and if you’re somebody who gets highly emotional or highly confrontational, it’s probably not a place for you.” Shifts are four hours on, four hours off – “it’s basically max effort and then trying to rest, then repeat,” she says – though good luck trying to brush your teeth or change your clothes, never mind catch some Zs, during your “off time” while you’re at the bottom of a boat that’s keeling at 55 degrees or slamming into a wall of ocean.

Caffari’s Turn the Tide on Plastic is sponsored by the nonprofit Mirpuri Foundation and the Ocean Family Foundation and throughout the race has done double duty by collecting ocean water samples in previously inaccessible parts of the world to determine the levels of plastic in the ocean, of which, by Newport, it is clear there is a lot. Boat captain Liz Wardley says the boat samples revealed microplastics even in the Southern Ocean, thousands of miles from inhabited land.

From Newport, Turn the Tide on Plastic and its six competitors will sail on to Cardiff, the capital of Wales. The next day as I watched the in-port race from an Adirondack on the considerably steadier, and far more spacious, waterfront lawn of Gurney’s Newport, the official Volvo Ocean Race port partner, a glass of champagne in hand, I couldn’t help but think of Caffari and her crew embarking on another nine days of pretty much the total opposite: frigid Atlantic waves, freeze-dried food, shit tickets. Not that she and her crew would have it any other way. “We all really love it out there,” she said. “You have to.”

Turn the Tide on Plastic’s Liz Wardley hoists a sail from below deck.

Wardley climbs the boat’s 100-foot mast to check the rigging.

Sleeping bunks are spare, but crucially outfitted with seat belts.

Navigation (and photo editing) happens by the glow of laptop below deck. 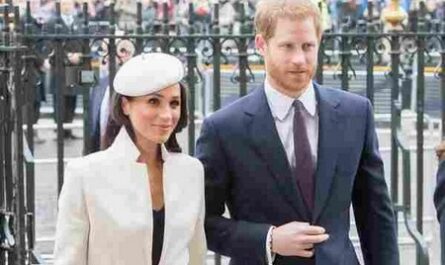 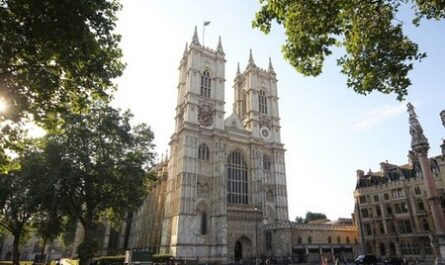