Puerto Rico’s governor’s office on Wednesday dismissed reports that the governor had decided to resign amid growing pressure and mass street protests in the US territory triggered by the publication of offensive chat messages.

In response to local media reports that Ricardo Rossello was on the verge of leaving the island, Public Affairs Secretary Anthony Maceira said in a statement that the governor “has not resigned and remains in Puerto Rico”.

The governor “is in a process of reflection and listening to the people. Whatever decision he takes, it will be officially made known,” the statement said, adding that “incorrect rumours” were being spread.

The daily El Nuevo Dia had earlier reported that Rossello recorded a video to be released on Wednesday in which he announces his resignation. Some reports claimed he had left the island. 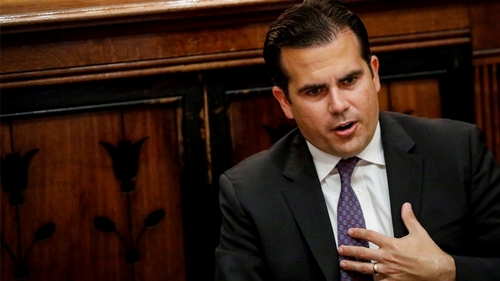 Former Justice Secretary Antonio Sagardia said earlier on Radio Isla that he had spoken to Rossello on Tuesday – and that his resignation was forthcoming.

“The governor is convinced,” Sagardia said.

Protesters had cheered when they heard about the reports of a possible resignation late on Tuesday, but warned that Rossello’s departure would not end the demonstrations that have now entered their 12th day.

More than 100 protesters gathered around the governor’s mansion on Wednesday in a renewed push to remove the embattled 40-year-old first-term governor.

Hundreds of thousands of Puerto Ricans have been demonstrating regularly since the leak of 889 pages of chat exchanges in which Rossello and his advisers insulted women and mocked constituents, LGBT people and journalists, as well as victims of Hurricane Maria.

A string of Rossello’s closest aides have stepped down over the scandal. His chief of staff, Ricardo Llerandi, was the latest to hand in his resignation on Tuesday, citing concerns for the safety of his family.

Rossello sounded a conciliatory note in a brief statement on Tuesday, but insisted he would not step down.

“When one side speaks legitimately, the other has the responsibility to listen carefully,” he said. “The people are speaking and I have to listen. These have been moments of complete reflection and of taking decisions based on the concerns of the people of Puerto Rico and of their best interests.”

Rossello’s administration has been accused of corruption and also criticised for its handling of the aftermath of Hurricane Maria, which left thousands of people dead in 2017.

But the scandal, known as “Chatgate”, plunged the administration into its biggest crisis so far.

On Tuesday, officials announced that a Puerto Rico judge had issued search warrants for the mobile phones of government officials involved in the chat as part of an ongoing investigation.

One of the search warrants said officials used the chat to transmit official and confidential information to private citizens in a potential violation of ethics laws.

A report issued on Wednesday by a special committee tasked with investigating whether legislators could proceed with an impeachment process against Rossello recommended that Puerto Rico’s House of Representatives do so. It is unclear if there are enough votes to move forward with that recommendation.

Everything You Need to Know about The Hottest Trend In Cannabis