A nurse says she used to use tanning beds ‘religiously’ before she was diagnosed with skin cancer that left her with a large hole on the side of face.

Five years ago, Tracy Callahan, from Cary, North Carolina, saw a small mole on her neck, right under her jawline.

While she was reluctant to see a doctor, her husband pushed her until she eventually scheduled a dermatologist appointment to get it checked out four months later.

The then-38-year-old said the staff took several pictures of it and, an hour later, the doctor called her and told her they needed to remove the mole – and she needed to come in after hours.

Callahan, a mother of two, was diagnosed with melanoma and would continue to battle it over the next several years. 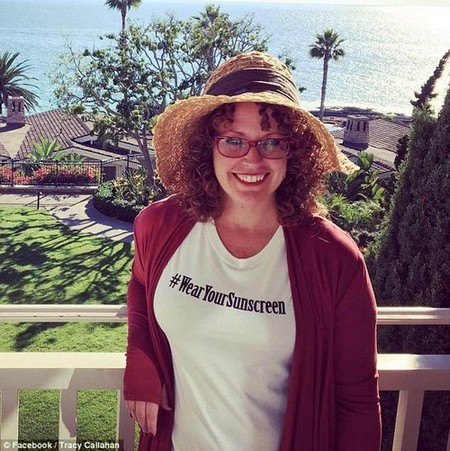 Tragic: Tracy Callahan (pictured), a nurse from Cary, North Carolina, who used to use tanning beds ‘religiously’ has revealed the five-year grueling battle she faced with skin cancer

Alarming: Callahan was first diagnosed five years ago at age 38 after a mole appeared on her neck (left and center). It was removed (right) and her doctor told her she was lucky it was caught early

Recurrence: The mother-of-two started getting three-month checkups following her initial diagnosis but soon she was diagnosed with another melanoma spot, this time on her right ankle

‘The dermatologist said: “I have really good news” and her next words were: “You have melanoma”,’ Callahan, now 43, told Yahoo Lifestyle.

‘I thought: “How the heck is that good news?” But it started me off in the right place. “We caught it much earlier than I thought,” my doctor said.’

The American Cancer Society estimates that more than 91,000 people will be diagnosed with melanoma in the US in 2018.

While melanoma is the deadliest of the skin cancers, the five-year survival rate from diagnosis for localized, early melanoma is more than 98 percent.

Following the mole’s removal, Callahan, who has two sons, had 15 stitches running across her neck.

The nurse said that’s when she knew the multiple sunburns she had during her childhood from summers spent in Florida and the tanning beds she ‘religiously’ used in the 1990s were finally taking their toll.

According to the Melanoma Research Alliance, tanning beds increase your risk of melanoma by 75 percent.

Callahan set up three-month checkups with her dermatologist following the surgery, but her battle was just beginning and she would face three more diagnoses over the next five years.

After her first dermatologist moved away, Callahan found a new one. On her first visit, a spot was found on her right ankle.

This time, she was left with 64 stitches after her surgeon had to perform a skin flap surgery, which occurs when healthy skin and tissue is partly detached and moved to cover a nearby wound. 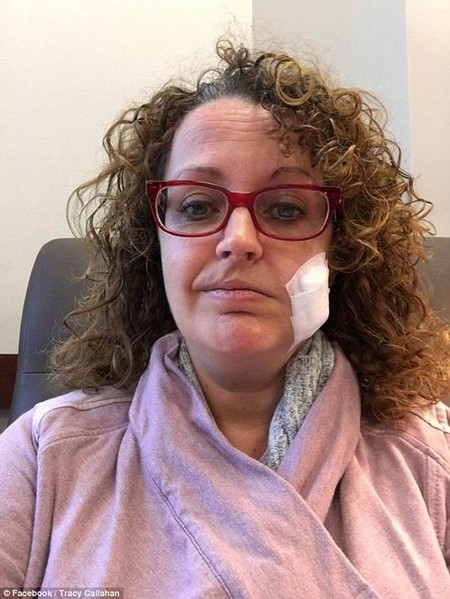 Shocking: Callahan was diagnosed with another spot on her right arm before the hardest one that came in November 2017, a melanoma on her left cheek (pictured)

Devastating: Callahan had Mohs surgery, during which thin layers of cancerous tissue are progressively removed and examined until only cancer-free tissue remains. She said she had the size of ‘a ping pong’ ball on her face before the surgery was complete (left and right)

‘My dermatologist looked at me and said: “What is that on your face?” I said: “Please do not tell me. Anywhere, but not my face.” Sure enough, it was melanoma.’

Callahan had Mohs surgery, during which thin layers of cancerous tissue are progressively removed and examined until only cancer-free tissue remains.

‘I had a hole the size of a ping pong ball on my face before they repaired it,’ she told Yahoo Lifestyle. ‘It was probably, emotionally, the hardest to recover from.’

Since that first diagnosis five years ago, Callahan has undergone 10 surgeries – and is determined to not have to face anymore.

She says she keeps an extra-wide brim hat in her car, wears sun protective clothing and sunglasses, and, most importantly, applies sunscreen every day.Re

Recovery: Since that first diagnosis five years ago, Callahan (pictured with her husband and two sons) has undergone 10 surgeries – and is determined to not have to face anymore

Determined: She (pictured with her husband) says she keeps an extra-wide brim hat in her car, wears sun protective clothing and sunglasses, and applies sunscreen every day

‘It’s not just the days you’re going to the beach. It’s the days you don’t think about,’ she said.

‘Sun exposure is accumulative. It’s the 10 minutes you’re going to Target. One day it’s 10 minutes unprotected. And the next day it’s another 10 minutes – that’s 20 minutes.’

Callahan has also started the Polka Dot Mama Melanoma Foundation which she uses to blog to share and experience and to raise awareness about the cancer.

‘I just don’t want anybody else to have to go through this,’ she said. ‘I hope people can relate to this and say: “Gosh, I should get my skin checked.” It could save someone’s life.’

WHAT IS MELANOMA AND HOW CAN YOU PREVENT IT?

Melanoma is the most dangerous form of skin cancer. It happens after the DNA in skin cells is damaged (typically due to harmful UV rays) and then not repaired so it triggers mutations that can form malignant tumors.

The American Cancer Society estimates that more than 91,000 people will be diagnosed with melanoma in the US in 2018 and more than 9,000 are expected to die from it.

The patient can decide to use a skin graft if the surgery has left behind discoloration or an indent.

This is needed if the cancer reaches stage III or IV. That means that the cancerous cells have spread to the lymph nodes or other organs in the body.

Why ‘little and often’ exercise is so good for you