Naturally, fans were living for her performance. “the way she ate and left no crumbs,” one person tweeted. Another added, “Wow I cannot believe I got to slay Megan the stallion and slayed tffff out of her. I’m about to cry.”

Megan Thee Stallion gave her first-ever performance of “Body” at the AMAs 2020, and she slayed it, of course. Before she took the stage, a pre-recorded speech the rapper made about body positivity played, and it was powerful.

“I love my body,” Megan said. “Every curve. Every inch. Every mark. Every dimple. It’s decoration on my temple. My body is mine, and nobody owns it but me. And who I choose to let in is so lucky. You may not think my body is perfect, and it probably never will be. But when I look in the mirror, I love what I see. So are you ready?”

Say it louder for the people in the back! Check out a GIF from the performance, below: 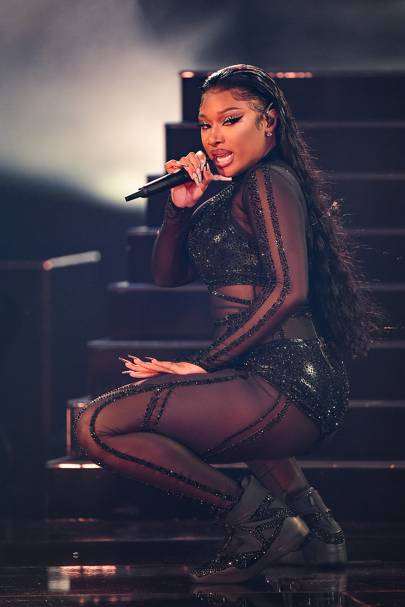 Her debut album, Good News, was released on Friday, November 20, and it’s received widespread critical acclaim. It currently has an astounding 93 on Metacritic. In its review of the album, The Guardian wrote, “Megan Thee Stallion’s talents are a moveable feast.” Meanwhile, Variety wrote, “Megan pulls off something tart, true, and real, while maintaining all that is best about her hard exterior.” Her song “Savage” has been one of the most successful of the year, reaching number four on the Billboard Hot 100. The remix featuring Beyoncé, which came out on April 29, also shot up to the top of the charts, reaching number one.