More than 170 governments are converging on a plan to curb greenhouse-gas emissions from the shipping industry, filling a gap left by the 2015 Paris climate agreement. The framework is slated for approval next week.

A panel of the United Nations International Maritime Organization (IMO) is due to meet in London, where it is expected to agree on a resolution that would set targets for emissions reductions and lay the groundwork for future regulations. The IMO would then flesh out and finalize the regulatory framework by 2023.

The international shipping industry emitted an estimated 812 million tonnes of carbon dioxide in 2015 – nearly 2.3% of the global total. The industry’s emissions are projected to double by the middle of this century.

Delegates are still debating a range of ideas on the timing and size of greenhouse-gas reductions required. But observers say that negotiations seem to be centred around a proposal from Japan that would curb the industry’s carbon output by nearly 44%, compared to 2015 levels, by 2060. 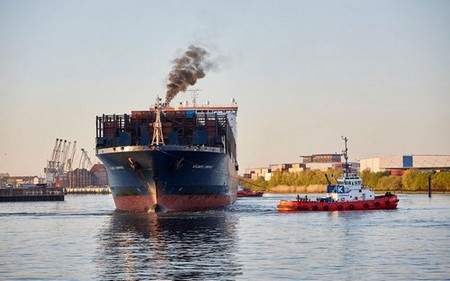 The Japanese proposal would not reduce emissions as quickly or to the extent called for in the Paris agreement, which aims to prevent global temperatures from rising more than 1.5–2 °C above pre-industrial levels, says Daniel Rutherford, head of the marine and aviation programme at the International Council on Clean Transportation, a non-profit research group based in Washington DC. Nonetheless, he says the proposal could mean major changes for ship owners around the world.

“In terms of what it would require from industry, it’s potentially a very big deal,” Rutherford says.

Although reduction targets are becoming clearer, the regulations needed to ensure that countries meet those goals remain murky. One option currently under consideration calls for strengthening and extending energy-efficiency regulations that the IMO adopted in 2011. Other proposals could mandate cleaner fuels or new engine technologies, or impose new speed limits on ships in international waters to reduce fuel consumption. Another outstanding question is whether the shipping industry would be allowed to offset its greenhouse-gas emissions by purchasing carbon credits.

Delegates at the IMO meeting might be tempted to take an incremental approach to emissions reductions, but advocates say there’s no technical reason why the industry couldn’t act more aggressively. Those efforts could include an immediate push to develop carbon-free fuels and a new generation of ships to take advantage of them, says Tristan Smith, who studies energy and the shipping industry at University College London.

Renewable energy can be used to produce hydrogen or ammonia, which could be burnt in internal-combustion engines or used in fuel cells. Storing those fuels for long-distance travel would be more expensive than using current petroleum-based fuels. But the alternative fuels could be produced anywhere, giving countries with cheap renewables a leg up as the market develops for carbon-free fuels, says Smith.

“What I’m describing is a significant change to the industry,” Smith says. But with advance planning, he says, there’s no reason the industry couldn’t reduce its emissions by 70–100% by the middle of this century.

Preparing for the future

The European Union and small island states are pushing for more aggressive action on greenhouse-gas reductions. But many developing countries fear that stricter rules will drive up the cost of shipping and ultimately harm their economies, Rutherford says.

Industry groups are also seeking more lenient rules, but some shipping companies are already pursuing technologies to reduce or eliminate greenhouse-gas emissions. Often, it’s the companies that have already invested in new fleets that support stricter rules, and those with older fleets that are fighting change, says Roy Campe, who manages research and development for the Belgian Maritime Company (CMB) in Antwerp.

Last year, CMB retrofitted a catamaran ferry serving its headquarters to run on hydrogen. The engine currently burns equal parts hydrogen and diesel, but could soon use an 85%-hydrogen blend. The company is preparing to scale up and commission a container ship that could carry a two-week supply of hydrogen for use in an auxiliary engine.

Reducing carbon emissions in the shipping industry won’t be easy and will involve big costs, says Campe. But he’s confident about the future. “There will be a point when it will be cheaper to run on hydrogen than on fossil fuels, and we would like to prepare ourselves.”

The long search for the pain gene