The work of Frank Lloyd Wright has inspired generations of architects. Now one of his most famous structures is serving as muse for a different kind of creative output. Buenos Aires–based illustrator Max Dalton has teamed up with the Frank Lloyd Wright Foundation to produce a limited-edition illustrated map of Taliesin, the architect’s estate in Wisconsin.

Jeff Goodman, the Foundation’s director of marketing and communications, has long been a fan of Dalton, who has garnered attention for his digital illustrations of various pop culture moments, like scenes from Game of Thrones and various Wes Anderson films.

Earlier this year, he approached the artist with an idea to raise money for the Foundation’s mission to preserve various Frank Lloyd Wright buildings. 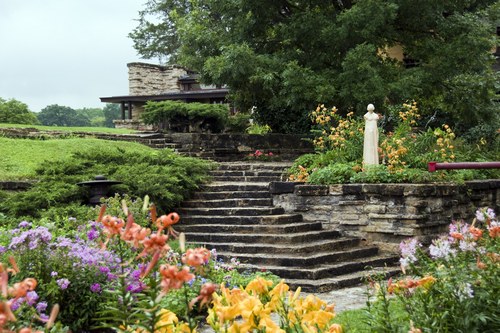 The result is a detailed map of the various structures dotting Taliesin’s 800 acres, including such landmarks as the Romeo Juliet Windmill, Midway Barn, Hillside School, and the Tan-y-Deri. The illustration will make its debut in the Summer 2018 issue of the Frank Lloyd Wright Quarterly, the magazine sent to Foundation members, in an effort to draw new membership. Anyone who enrolls by October 15 will receive the magazine and map.

“I’m a big fan of modern design and early 20th-century architecture and, of course, Frank Lloyd Wright is one of my favorites,” says Dalton, who researched everything from the architect’s handwriting to the way he placed trees around his properties in order to marry the architect’s style with his own. “Just having the opportunity to work on something related to his work and being involved is such a great honor to me. I’m proud to be contributing – in a very tiny way – with the preservation of Wright’s legacy.” It’s a cause that, despite Wright’s renown, remains important – just this year a developer tore down a Frank Lloyd Wright building overnight to avoid controversy (needless to say, it backfired).

The project was also a vivid reminder for Dalton of Wright’s incredible skill as an architect. “The process of drawing every building in detail made me realize the brilliance of what it means to obtain all that beauty and all that simplicity in the forms of such complex structures,” Dalton says. “I’ve also learned a few things about Wright’s work that only reinforce for me what a genius he was. For instance, to know that he drew Fallingwater in about two hours just blew my mind.”