The man bun made its debut back in season six, but while its time on the show may have been brief, it quickly became one of my favorite characters. For one thing, it’s dependable, which is more than you can say about the majority of the hot messes in Westeros.

Whether Jon Snow is riding a dragon, raging on the battlefield, or making any number of questionable decisions, the man bun is there holding it together, even when Jon isn’t.

Game of Thrones loves to kill its darlings, and while there are plenty of reasons to be upset following the series finale, the death I’m grieving most deeply is that of Jon Snow’s man bun. Why kill the innocents? What did that perfectly pulled-back style ever do to deserve its fate?

Sadly, the bun meets its unnecessary end in the series finale when Jon heads North with Tormund and the rest of the Wildlings – because, what, he’s too good for it now? It doesn’t allow his curls to look *~wild~* enough? If anything, doesn’t it feel as if life in the windy, blizzardy North might be precisely the right time for Jon Snow’s man bun to shine? I can hear the counterarguments now: it’s a shorter season! The writers don’t have time to give every character A Big Moment!

Excuses, all of it. Jon Snow’s man bun deserved better. 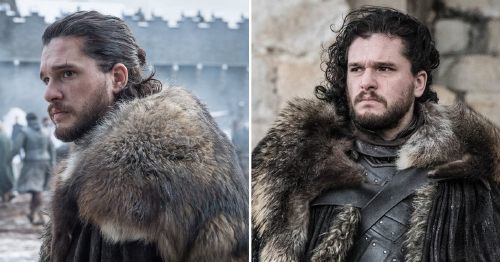 As we mourn the loss, let’s pay tribute to the iconic hairstyle with a look back at some of its most memorable moments throughout season eight. RIP, man bun. Thanks for the memories (and all the hot Kit Harington GIFs).

You know what? I’ll just come right out and say it – this season of Game of Thrones has been an utter and complete disappointment. Although I know that showunners David Benioff and D.B. Weiss can’t please everyone with their story choices (and should never be expected to bend to the will of fans), I’ve found myself overwhelmed lately as I’ve watched beloved, intelligent characters act in ways that are completely foreign to their personalities and do things that make little to no sense.

Season eight’s fifth episode, “The Bells,” takes the most disconcerting plot twists yet. From anticlimactic deaths to battle tactics that would make even the most cursory Game of Thrones fan shake their heads, the entire episode is a confusing mishmash of bad decisions. Ahead, I’m breaking down the most egregious.

Game of Thrones fans and longtime supporters of Daenerys Targaryen are about to see the worst of the Mother of Dragons Mad Queen. In episode five, “The Bells,” Daenerys shows just how far she’s willing to go to sit on the Iron Throne – and it’s not pretty. Not only does she kill those close to her in the penultimate episode, but she kills thousands of innocent people after Cersei’s armies surrender.

Daenerys has her armies at her feet, and we have a feeling things are about to get real messy between the Mother of Dragons and the levelheaded people left in Westeros. .. especially with Cersei out of the picture. Watch the clip above and see how the people left at King’s Landing reel from Daenerys’s killing spree.