Now, with lockdownall-but-over and the virus anything but, many people are still reeling from health issues, financial hardship or perhaps a cruel and devastating loss.

Super Saturday may not have appealed to them, neither will they have felt inclined to eat out to help out. (Soz Rishi, but props for the accidentally sex positive message.)

Now, feeds are littered not just with the smugsolators and the isolators, but with those flexing their privilege in a whole new way.

Because it’s officially Summer 2020 and whilst the vast majority of people will be silently weeping into a pile of all that is left of their original plans; a stack of angry email exchanges with RyanAir, bikinis still with the tags still on, sadly defunct wedding invites…many more are jumping on a plane the first chance they get. 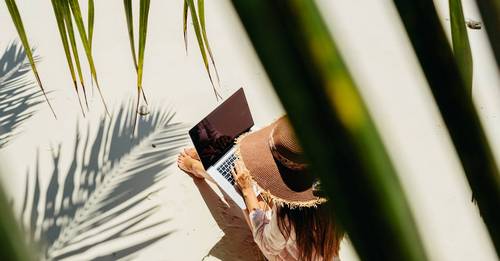 Our capacity to assume everyone else is having a better time than us has long been facilitated by Instagram. Though the Coronavirus was hailed as “the great leveller,” it was swiftly proven as anything but, and social media was the window through which we realised this with brutal efficiency.

After all, families of five stuck in cramped flats in Birmingham couldn’t exactly see how their lockdown was level with the second-homers in their multi-acre country estate, joyfully documenting on instagram just how great it was to slow down and smell the inherited peony garden.

But where did these people magic up annual leave at the last minute? Most companies during lockdown scrabbled for you to take your leave as originally planned, even if that meant your week in Crete looked remarkably like a week from your flat.

No, instead, those still able to WFH are realising that home doesn’t need to be ‘home.’ For some lucky few it can mean a second home in Ibiza or the South of France, for others, it means renting a villa in Spain, setting up the wifi and logging in to the office.

Introducing the new breed of smugsolators, the Work From Holidayers.

You’ll recognise one as soon as you see them. They are tanned, a little hungover, unaccountably happy for a work day. They’re the ones logging in to Zoom with their hair still wet from the pool, tan lines visible on their shoulders.

“Oh I almost missed the call,” they laugh smugly, “The time difference!”

Next they’ll regale you with the funniest thing that happened at the beach bar last night, or tell you they are logging off at lunch to eat at the local taverna.

They’ll reply to emails with a casual apology for even the most minuscule delay.

“Soz! Was just at the boulangerie! Cycled down on my bike. Mega traffic in the village LOL.”

You bang your head on the table.

Because instead, you’re sweating in a non-air conditioned home office – or worse – the ACTUAL office, lamenting the summer that never was. You are despairing at the price of what appears to be the last rental cottage left in all of Cornwall. You are terrified of getting on a plane and are frantically checking facts about the health service in each air bridge country. Instead, you are trying to inflate agrown-up sized paddling pool in your shared garden, much to the chagrin of your neighbours.

You scroll through your feed, and see Charlotte from the commercial team has bagged herself a two week villa stay in Mykonos. She takes snaps of herself at Nammos with a magnum of rose and captions it “working lunch.” She has an image of her under a beach umbrella on her laptop, “hard at work, or hardly working? LOL” and she instagram stories her “new desk, who dis” home office- a pool side table with strategically arranged fruit platter from breakfast.

You moan about this with colleagues, especially the ones you see eye-rolling when Tania, the head of sales logs on to the afternoon team meeting on her phone. “Sorry for the bad signal, just at the beach,” she brags in a detached manner, shifting in her sun lounger and nodding meaningfully as her deputy discusses how much harder they will have to work to make their autumn targets. “So important,” she agrees, sipping her mojito.

You hate these people because you wish you could also be Working From Holiday. You criticise their tactless social media documentation of their comparative privilege but a dark thought also creeps into the recesses of your mind.

Because, should you suddenly find yourself able to book that surprisingly cheap villa in Mallorca in September, you know you will behave in exactly the same way.

Before you know it, you’ll be posting a bikini snap with the caption, “Office apropos? LOL.”

These are your definitive social rules for the new normal