In 2019, McGuffey announced she was challenging Neil, the current sheriff at the time, who she said fired her back in 2017 after a “pretty serious disagreement” about the lack of accountability for officers using force and harassing women, female officers, and female inmates.

She filed a lawsuit (which is currently pending) and left her job as a major in command of jail and court services, after rising through the ranks in the sheriff’s department for over three decades.

There’s a new sheriff in town, and she’s pretty badass. Last night, Charmaine McGuffey made history when she was elected as the first out LGBTQ+ woman to become a sheriff in Ohio. But her significant win was made even more gratifying by the fact that she had also defeated her former boss, who reportedly demoted and subsequently fired her for exposing concerns about the use of force against women, as well as targeted her for being a gay woman. 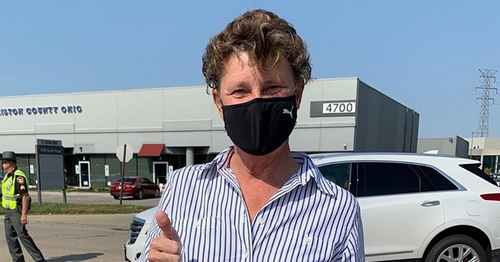 “I am so humbled and honored to be elected by the Hamilton County voters,” McGuffey said during a victory celebration on Nov. 4. “When I was 14 and a little girl, I was told, ‘No way, you can never even be a police officer because you’re a girl, because you’re a woman.’ And look where we stand today.” She beat Republican candidate Bruce Hoffbauer by 52 percent in the race, after defeating her Democratic opponent and former boss, Jim Neil, by about 70 percent of votes in the primary.

The Cincinnati native, who was endorsed by the Hamilton County Democratic Party, is committed to progressive jail reform with a focus on rehabilitative strategies, as well as the use of de-escalation tactics among officers, according to McGuffey’s campaign website. “As a gay woman working in law enforcement, I know what it’s like to be targeted for who I am,” she previously tweeted. “I’ve seen justice and I’ve seen injustice. And I know we can do better.”