You don’t need us to tell you this is a welcome light at the end of a bleak pandemic tunnel which has fundamentally altered our day-to-day lives and had serious health, economic and social consequences.

The big question on everyone’s lips is of course, who will get it first and who’ll have to wait? We know that the elderly and vulnerable will be at the front of the queue, including: “all individuals aged 16 to 64 years with underlying health conditions which put them at higher risk of serious disease and mortality.”

Pregnant women or those planning to get pregnant within three months of the first dose are advised NOT to get vaccinated as there “is no data as yet on the safety of Covid-19 vaccines in pregnancy, either from human or animal studies.”
As it was announced that a Covid-19 vaccine could be rolled out in the UK as soon as this week, millions of us breathed a collective sigh of relief. The Pfizer/BioNTech Coronavirus vaccine was approved for widespread use in the UK – the first country in the world to have a vaccine approved – and is believed to have a 95 percent success rate in all age groups it was tested on. 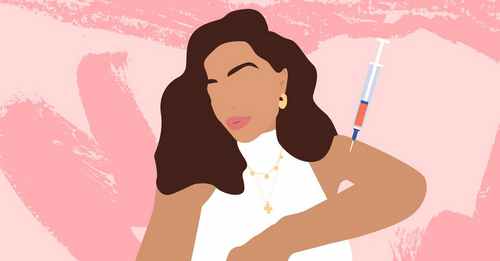 But where does this leave the remaining majority of Millennials and Gen-Z? Will we have to wait for the vaccine for our lives to return to normal?

Prof. Elliot-Major, the UK’s first Professor of Social Mobility at the University of Exeter who recently co-authored an LSE report looking into prospects for under 25s is concerned. The report outlines how one in ten young people lost their job during the pandemic. He describes the ‘permanent scarring’ that’s shaping the future life prospects of what he calls ‘Generation Covid’. He has been in talks with Number 10 Downing Street on policy recommendations following his research.

“Yes the vaccine is a light at the end of the tunnel, but beneath that light there are very dark social and psychological issues to address,” he says. “There are particularly scarring effects from long-term unemployment and lack of education on the under 25s. We are only just beginning to see the long-term implications.”

In the short-term, how long will it take to get everyone vaccinated and get our lives back to some kind of normality? “Most likely Spring 2021,” Sir Simon Stevens, chief executive of NHS England told a Downing St press conference: “We’ve been clear the bulk of vaccinations will be next year. We’re confident looking at Spring onwards that things will get better and we’ve got to hold our nerve because we can still spread it. Let’s redouble our resolve to follow the rules because it’s a few short months.”

There is permanent scarring from long-term unemployment and lack of education on the under 25s. We are only just beginning to see the long term implications.
So as the huge logistical task of the first phase is carried out, what does this mean for the day-to-day for those of us who are not in the priority categories, as in healthy millennials and Gen Z? Do we still need to socially distance? The answer it seems is, yes. Will we be able to eventually move away from lockdowns and other restrictions? Will the over 50s be able to go to the pub or to a concert while the young remain socially distanced? The answer to both of these questions still remains unclear.

What the makers of this vaccine can confidently say is that those who receive it will be protected from getting very sick or dying from the virus. But critically they cannot yet say that being immunised stops someone from spreading Covid-19. BioNTech’s Chief Business and Commercial Officer Sean Marett told BBC Newsnight that “in 95 percent of cases you do not (on this vaccine) get symptoms of the virus and that is true for all age groups – elderly down to 18 years old.”

But when asked about whether being vaccinated stopped you from spreading Covid-19 he said: “You yourself will be protected seven days after the second dose of the vaccine. As to whether you would spread it, it’s unlikely. But we have no evidence to suggest that you would not spread it. It’s too premature to be able to address that very important scientific question.”

So you could still get infected if you give your vaccinated grandmother a hug. She may be protected but you are not. And even as a person under 50-years-old you’re less likely to get sick from the virus, age is no guarantee you won’t be adversely affected if you are young. There are cases of teens and twenty-somethings with long Covid and you could still pass it on to someone else who is at risk and not yet vaccinated.

There’s a growing sense of intergenerational injustice and blame being projected onto young people about spreading the virus. Under 25s stand to be affected more than anyone else from this pandemic.
“Looking at the numbers, Covid-19 is much more likely to make older people ill. But, of course, there are exceptions where some young people – particularly those with other health conditions – have become very sick and a small minority have died from the virus,” says Dr Smitha Mundasad, a Health reporter with the BBC, who previously worked as a doctor. (She spoke to us in a personal capacity.)

All of the people Glamour UK spoke to about the vaccine rollout agreed that it’s appropriate to put the physical health of the elderly and vulnerable first. But they also pointed to one major health factor for young people that needs greater priority and isn’t being taken into account – mental health.

A study by the Samaritans and the University of Glasgow found that the mental health of young people and women have been particularly at risk during the pandemic. The research says adults (18-29 years) were more likely to report depressive symptoms and suicidal thoughts than older people. A Samaritans spokesperson told Glamour UK: “We know that more young people are struggling because of the pandemic. The key challenges that are affecting young people include loss of coping strategies (contact with support groups, friends and family etc), lack of peer support, decline in mental wellbeing and uncertainty about the future.”

“From a clinical point of view I can understand why the vaccine rollout prioritises the elderly and most vulnerable. But we also need to acknowledge that this has been an utterly dreadful year for young people who are worried about their job prospects because of the state of the economy,” says Shadow Health Secretary and Labour MP for South Leicester Jonathan Ashworth. “Our youth have been socially isolated due to lockdown or have been out of school and this is having a disproportionate impact on disadvantaged groups who’ll find it harder to catch up. The cruelty of covid is that it exploits inequalities making the poorest suffer most. One of the biggest challenges that we also need to address is mental health”.

“I don’t think the government is doing enough to protect young people. We have a mental health system that has been underfunded for 10 years and we are at risk of writing off an entire generation,” adds Ashworth. “We need a clearer plan on jobs and education and a mental health and wellbeing strategy. I’m really worried.”

“There’s a growing sense of intergenerational injustice and lots of blame being projected onto young people about spreading the virus,” he adds. “In my view, under 25s stand to be affected more than anyone else from this pandemic. This is the first generation since the war that will not be better off than their parents. Social mobility was already in decline before Covid, but the pandemic has accelerated that.

We are at risk of writing off an entire generation. We need a clearer plan on jobs and education and a mental health and wellbeing strategy.
Dehenna Davison, 27, Conservative MP for Bishop Auckland however, is confident young people are very much on the minds of the government. Elected at the age of 26 she has spent the past year representing her constituents and young people in parliament. “We are aware of how difficult this has been for young people. Unemployment is a huge cause for concern particularly in the hospitality sector where job losses have disproportionately impacted young people,” adds Davison.

“But I believe we have to continue to be vigilant. Like anyone else my age, I’m dying to catch up with my girlfriends over dinner again soon. I know how hard it is for people to socially distance, but we all have to continue to play our part. At the moment I don’t know when exactly myself and other healthy people my age will be vaccinated. It’s quite tempting to go and see a mate to catch up, but being patient and being responsible is what is going to get us towards that light at the end of the tunnel.”

For now the message from government and scientists for frustrated millennials and Gen-Zers is to sit tight and continue to observe safety guidelines while the most vulnerable are taken care of first. While we don’t yet know the full impact that the vaccine will have on infection rates, we also don’t know just how much damage the economic and social dumpster fire raging before our eyes is having on the youth population.

Guess we’re just going to have to sit tight over the coming months and years while we wait to move towards a more normal way of life.

Gynecology questions girls are too embarrassed to ask about